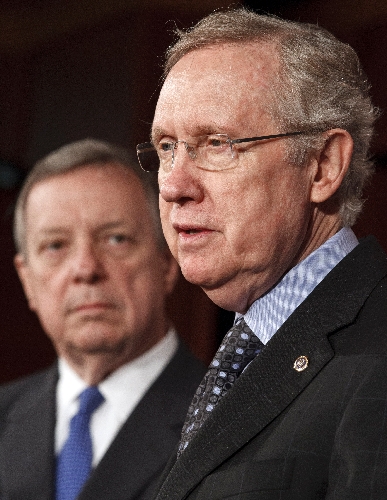 WASHINGTON – Sen. Harry Reid said Thursday he would vote to legalize same-sex marriage if it were put on the ballot in Nevada, saying he was persuaded by family members for whom “marriage equality” is accepted in today’s world.

Reid’s position, conveyed by a nod of his head at the end of a meeting with reporters, signaled an evolution for the state’s Democratic leader, who has acknowledged voting a decade ago for a constitutional amendment in Nevada to ban gay marriage.

Reid says he personally believes marriage is between a man and a woman. But like President Barack Obama, who announced Wednesday he supported gay marriage, Reid indicated this week the time may be right for society to reflect a view he said probably “will carry the future.”

Besides voting for the anti-gay marriage Nevada amendment, Reid in 1996 voted as a senator for the Defense of Marriage Act, the federal law defining marriage as between a man and a woman.

Reid suggested Thursday that Senate Democrats may try to repeal the Defense of Marriage Act, although he did not commit to bring it up for a vote. As Senate majority leader, he has been acknowledged as a supporter of gay rights through his advocacy for anti-discrimination bills, expanding hate crimes law and his work in 2010 to repeal the “don’t ask, don’t tell” policy against gays and lesbians in the military.

His nod in favor of legalization for same-sex marriage was his most direct statement on a topic that was on the back burner until a few days ago when Vice President Joe Biden spoke in favor of it. That led to calls for Obama and other leaders to clarify their positions.

Reid’s position also sets him apart from the official stance of The Church of Jesus Christ of Latter-day Saints, which has campaigned against same-sex marriage. Reid, the highest-ranking Mormon in government, privately criticized the church for getting involved in the anti-gay marriage Proposition 8 campaign in California in 2008, saying it would hurt missionary outreach.

Reid’s latest remark also was atypical in that he weighed in on a matter he said should be decided by the state.

Nevada is one of 30 states that have passed statutes or constitutional amendments banning same-sex marriage. Some state legislators and activists plan to use the new attention on marriage equality to seek repeal of the state ban. A lawsuit also seeks to have it invalidated.

Tick Segerblom, a Democratic assemblyman from Las Vegas now running for state Senate, said he plans to introduce a same sex marriage resolution in the next Legislature. He said Reid’s newly expressed support could serve as a “catalyst.” The process of amending the state constitution could take at least four years, however, and it is not clear where most Nevadans stand.

“I think it definitely helps,” Segerblom said. “There are a lot of Mormons in the state who probably listen to what he says. They would not necessarily follow what he says, but they would listen to him. I think it is a very positive statement, and it was from the heart obviously.”

In a statement Wednesday after Obama’s announcement, Reid said he believed personally that marriage should be between a man and a woman. “But in a civil society, I believe that people should be able to marry whomever they want, and it’s no business of mine if two men or two women want to get married.”

“The idea that allowing two loving, committed people to marry would have any impact on my life, or on my family’s life, always struck me as absurd,” Reid said. “In talking with my children and grandchildren, it has become clear to me they take marriage equality as a given. I have no doubt that their view will carry the future.”

But, he said, because most domestic relations matters are governed by state law, “I believe that is the proper place for this issue to be decided as well.”

Asked about the legalization of gay marriage Thursday, Reid repeated his view that it is a state matter.

Asked then how he would vote if gay marriage were on the ballot in Nevada, Reid said, “I would follow my grandchildren and my children.”

So you would support gay marriage? he was asked.

He nodded yes as he walked away from the podium.

Fred Lokken, a political scientist at Truckee Meadows Community College, said Reid’s statement “begins with perhaps more of a Mormon response and ends with a true Nevadan response. We are all about not getting our nose in other people’s business. That has been the long-standing culture of the state and plays extremely well in most parts of the state.”

By invoking younger members of his family, “He really is speaking to his own generation, which likely reflects the greater discomfort with same-sex marriage,” Lokken said. “He is saying we are about the future, and so he would support moving forward and not hang onto arguments tied to his own generation.”

As a political matter, Lokken said, Reid’s endorsement of same-sex marriage will galvanize what has become a key part of the Democrats’ coalition in a state that is important to Obama’s re-election bid.

“I see it as a significant statement,” Lokken said. “They found something that is connecting with the base.”