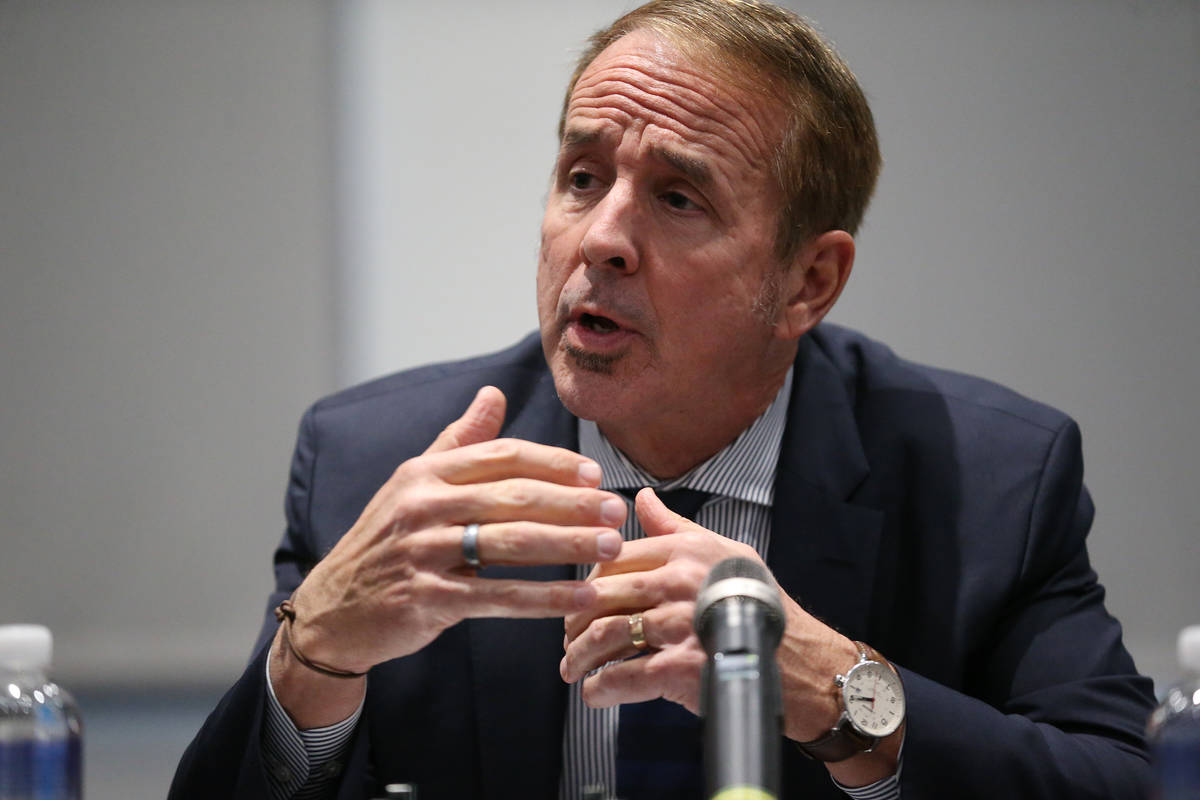 Following an emotional and contentious discussion, Nevada’s Board of Regents voted 10-3 Friday to change board policy to comply with new federal Title IX sexual misconduct regulations.

Regents Lisa Levine, Donald McMichael Sr. and John Moran opposed the motion after hearing comments arguing that the changes will make it harder for sexual assault victims to obtain justice.

Several lawsuits have been filed seeking to block the regulations, including ones filed by the American Civil Liberties Union and by 18 state attorneys general. Nevada is not a participant in either lawsuit.

Nevada System of Higher Education Chancellor Thom Reilly told regents that not adopting the new regulations would put NSHE out of compliance with federal Title IX law and could jeopardize millions of dollars in federal funding.

Reilly said he doesn’t know of any school nationwide that’s not enacting the new regulations.

He said an item could be brought back to the board during an Aug. 21 meeting to see if regents were interested in joining any pending litigation.

Most written public comments submitted for meeting, many of them from students and college and university employees, opposed to the new regulations. A few student leaders also spoke out against the proposed changes, including Dominique Hall, University of Nevada, Reno, student body president.

Hall called the new federal regulations “disgusting” and called on the NSHE board to vote no and join other states in taking legal action.

She said she’s a sexual assault survivor and that years’ worth of trauma almost led her to drop out of college. She said she was sharing her story for the first time, speaking up for students who can’t.

Levine, a newcomer to the board, told fellow regents her vote would be a strong “no.” She said regents who vote “yes” stand on the side of rapists and violent criminals.

Regent Jason Geddes was among the regents taking offense at her remarks, responding that no board members stand on the side of assaulters. NSHE has adopted policies for decades to protect students and employees, he said, noting he encourages Nevada’s higher education system to join a lawsuit fighting the changes.

But it’s federal law, he added. “We have no choice but to implement these.”

Students are counting on federal financial aid in order to be able to attend school in the next couple of weeks, Geddes said. “We cannot delay this.”

Regent Cathy McAdoo said she was also offended by the accusation that voting “yes” would be siding with an oppressor, saying she has spent her entire career helping the underserved.

McAdoo said that she doesn’t agree with the federal changes but is also struggling with jeopardizing federal funding.

At one point in the meeting, Levine said she had state Attorney General Aaron Ford on the phone, but the board chairman told Levine she was acting out of turn. Just before the vote, Levine continued to talk and other regents interjected, with one saying “she’s out of order” and another calling for a vote.

Shortly after the board meeting ended, an eight-second video clip began circulating on Twitter showing NSHE Board of Regents’ Chief of Staff Dean Gould interrupting Levine, asking her to mute her line. When she continued speaking, Gould said he didn’t want to “man speak,” but would have to if she continued to “child speak.”

Gov. Steve Sisolak, who appointed Levine to fill a vacancy on the board beginning in early June, wrote Friday on Twitter: “This kind of patronizing & condescending treatment toward a member of the Board of Regents (or anyone) is completely unacceptable & deserves to be widely condemned. I expect a swift apology to @Lisa_C_Levine — not that she needs me to request one on her behalf.”

Ford also weighed in on Twitter: “This is utterly ridiculous. Shame on Dean Gould for disrespecting Regent @Lisa_C_Levine like this. And interesting to note that the disrespect occurred during a meeting that discussed sex discrimination under Title IX. Sure hope the @NSHE Board of Regents addresses this nonsense.”

Gould said in a Friday night statement that his reaction was in response to a previous board meeting on July 23, when he was attempting to protect the board from a possible open meeting law violation and Levine accused him of “mansplaining.”

“I found this comment to be unprofessional and embarrassing and is not an appropriate way for an employer to speak to an employee,” Gould said in the statement.

During Friday’s meeting, Levine was “disrupting the defined procedural process” while the board chairman was trying to take a roll call vote, Gould said in the statement. “At that time, I became frustrated at her lack of decorum. In retrospect, I should not have stooped to her level of acrimony.”

During their meeting, regents also:

— Heard proposals to comply with an additional $25 million in budget cuts, as required by Assembly Bill 3 during the just-concluded special legislative session, but decided to postpone any action until an Aug. 21 meeting.

Reilly outlined options, such as making a one-time transfer from operating reserves to help offset the additional budget cuts, with options including $15 million, $23.5 million or $39.5 million.

—Approved a revision to board policy to waive certain eligibility requirements for the Governor Guinn Millennium Scholarship as authorized by Senate Bill 2 during the special legislative session. The revision allows students who lost eligibility at the end of spring semester to be held harmless and affects 2,191 students.

—Heard an update on the University of Nevada, Reno president search.

Semi-finalists will be selected next week and video interviews will be conducted via Skye on Aug. 24 and 25.

Finalists will be brought to campus the week of Sept. 14 for a series of public forums and interviews. NSHE regents could make a decision that week.

In October 2019, UNR announced current President Marc Johnson planned to leave his job in June to return to a professor position. But this spring, NSHE regents voted to extend Johnson’s contract through Dec. 31 due to the COVID-19 pandemic.