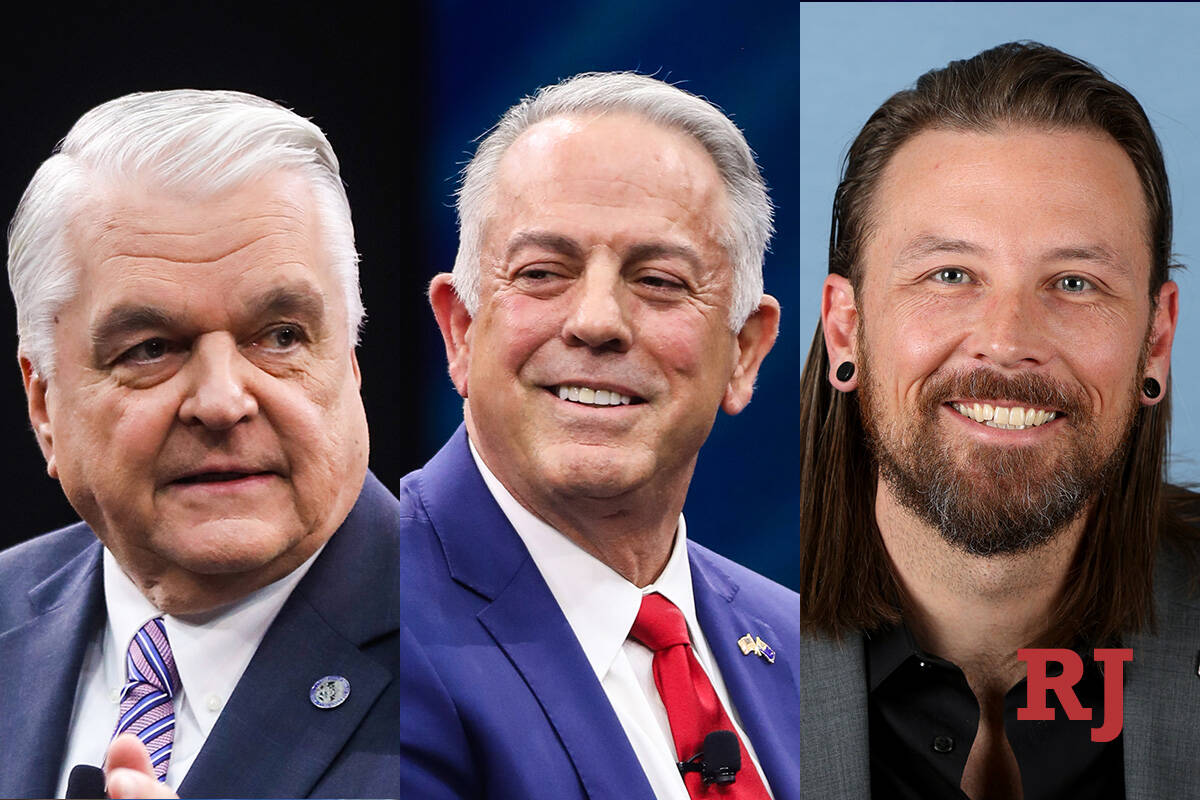 Gov. Steve Sisolak is looking to hold off a trio of challengers in his bid for a second term in a race that includes Republican challenger Joe Lombardo, the two-term sheriff of Clark County. A pair of third-party candidates in Libertarian Brandon Davis and Independent American Party candidate Ed Bridges round out the ticket.

The COVID-19 pandemic overshadowed much of Sisolak’s first term in office, and the Democratic incumbent has said that he wants four more years to tackle the objectives such as improving education and diversifying the economy that the pandemic put on hold.

Lombardo, who has served as sheriff of the state’s most populous county since 2015, decided to run for governor because he disagreed with Sisolak’s handling of the pandemic and believes he can better lead the state. The sheriff says the top issues facing the state are economic diversity, education and law and order.

“My view of the state and the state government is that we do a lot of handing out other people’s money to solve other people’s problems. But we don’t have a plan in place to address our problems in the future,” Lombardo said.

Here’s how the candidates stances stack up on some of the key issues heading into November:

Sisolak said he wants to look at every possible solution when it comes to addressing the drought-driven water crisis along the Colorado River, including pushing for the six other states that rely on the Colorado to catch up with the conservation measures that have been put in place by the Southern Nevada Water Authority over the past two decades.

Sisolak, who served on the Las Vegas Valley Water District when he was a Clark County commissioner, said that Nevada is in a better position than other states thanks to the low-lake-level pumping station and third straw that can pull water from Lake Mead even if it drops to a point where water can’t be released. But Sisolak said there are additional policies the state could look at, such as working with municipalities to remove grass front yards.

Lombardo said he would like to see jurisdictions be more aggressive with conservation measures, including “removing all green spaces,” and looking to curb water use in the agriculture sector downstream of Hoover Dam.

Neither Sisolak nor Lombardo think the concerns over future water supplies should hinder Southern Nevada from growing. Clark County is expected to grow by 1 million residents by 2060, according to forecasts by UNLV.

California recently passed legislation to effectively ban the sale of gas vehicles by 2035. But that is not a step either Lombardo or Sisolak say they are willing to take for Nevada.

Sisolak said while he supports the move to electric vehicles, he doesn’t want to set an “arbitrary date to ban fossil fuel vehicles.”

“That’s getting a little over our skis,” he said.

Lombardo said Nevada doesn’t have the infrastructure in place to be able to handle such a transition, saying such a mandate would be putting “the cart before the horse.”

Abortion protections quickly became a major campaign issues after the conservative majority on the U.S. Supreme Court in June overturned the Roe v. Wade decision and allowed for states to outlaw abortions.

The decision made no immediate impact on Nevada, where voters in 1990 approved a referendum to allow abortions up to the 24th week of pregnancy. That law can only be undone by another vote of the people or if the federal government were to pass some kind of national abortion restriction.

Both Sisolak and Lombardo have vowed to fight to support Nevada’s abortion law if Republicans passed a nationwide ban, but their views on other forms of abortion restrictions and policies differ.

After the Dobbs decision, Sisolak issued an executive order that made it so that no Nevada agency can provide information or use resources to help authorities from other states in investigating people for receiving or providing an abortion in Nevada. Sisolak said he would push to codify that executive order into law during the next legislative session in 2023. Sisolak said he would also continue to fund family planning centers.

“I’m a firm believer that the choice of when to start is family is between a woman and her doctor,” Sisolak said.

The Clark County School District is facing a yearslong teacher shortage that only continues to worsen. In mid-July, the district had more than twice as many vacancies as it saw in the same period in 2020 and 2021.

Asked how he would address that issue, Lombardo said he wants to make it easier to become a teacher and would look to reduce the teacher licensing requirements and streamline the process overall.

But he said his first focus would be repealing the state law enacted in 2019 that put restorative justice policies in place for students 10 years or older, meaning there are less punitive and more reflective measures in place such as behavioral intervention and referrals to a student support team.

“We have to go back to the discipline model we experienced in years past,” Lombardo said.

Sisolak said that he would push to get teachers another raise but that the state needs to get more teachers in the pipeline; he said the Nevada State College should play a large role in that effort.

“Teacher’s shouldn’t have to drive for Uber or wait tables to ensure they can make ends meet,” Sisolak said.

Mirroring a national trend, rising crime has becoming a major talking point for Republicans running in Nevada. During a campaign stump in July, former President Donald Trump, flanked by Lombardo, called Nevada a “cesspool of crime.”

Lombardo has tried to lay the blame of the uptick in crime on criminal justice reforms passed by Democrats during Sisolak’s first term. But criminologists say that jurisdictions that have embraced such reforms have not seen crime rates go up faster than other jurisdictions.

Crime trends in Las Vegas have tracked closely to what has been seen in other major cities, with overall crime numbers increasing from 2020 to 2021, but still a good clip below 2019 levels.

Lombardo said he will repeal “soft on crime policies,” specifically Assembly Bill 236 of the 2019 session. That bill was an omnibus criminal justice reform package, which Lombardo’s department did not oppose, aimed at reducing the rate at which people return to prison to lower spending on incarceration.

Among other changes, the bill raised the trigger for a felony theft charge from $650 to $1,200 and increased the weight of drugs for a person to be charged with felony trafficking.

The final version of the legislation received bipartisan support and passed in the state Senate on a 19-2 vote, with six of eight Republican senators voting in favor. It passed on a party-line vote in the Assembly.

Sisolak, who has been criticized for the low pay and overall lack of staffing for state police, said that there needs to be more funding to hire more police officers and raise their pay to be competitive with other law enforcement jobs, and has said he would call for that increase during the 2023 Legislature.

Democrats in 2021 moved Nevada to an all-mail ballot election system, with the ability for voters to opt out of receiving a mail ballot. Republicans have railed against the change fueled by unsubstantiated claims of mail ballots leading to voter fraud, claims stoked heavily by Trump.

Lombardo hasn’t embraced the same election denial rhetoric as others in his party, but he has been critical of Sisolak and the Democrats over the switch to mail ballots. Lombardo said he said that he believes mail ballots are “ripe for fraud” and would seek to repeal Nevada’s mail-in ballot law and would also push to make so-called ballot harvesting illegal again and implement voter ID requirements.

Davis, 40, is the CEO of MNGR, a marketing and advertising agency in Las Vegas. He told the Review-Journal that he decided to run because he saw politicians in both parties passing legislation that he believes has not been in the best interest of Nevadans. Davis pointed to the 2015 tax increased passed by Republicans under Sandoval and to pandemic policies put in place by Sisolak in 2020.

He said the growth of the nonpartisan and third-party voting groups in Nevada has given rise to “politically homeless” voters who don’t fit into either major party.

“Most people in the state want to keep government out of their lives,” Davis said. “I’m the voice of those people in the middle.”

He said his biggest issue is the economy and addressing inflation, which he would do by repealing existing taxes such as the 2015 commerce tax and streamlining occupational licensing in the state.

Davis said he would not seek to make any changes to Nevada’s abortion laws.

On elections, he said he thinks Nevada’s mail-in ballot system works and would support a switch to a ranked-choice voting for the state as a way of creating system that takes control away from the two major political parties.

He said he supports alternatives to public education, such as education savings accounts and private school vouchers.

Bridges, 86, a member of the Independent American Party, is a retired financial adviser who is running because he feels like the Republican and Democratic parties “have sort of merged and are ignoring the constitution.”

“Both parties are straying from our constitution, both are controlled by Washington. We have a lot of independent people in Nevada, but they don’t vote that way,” he said.