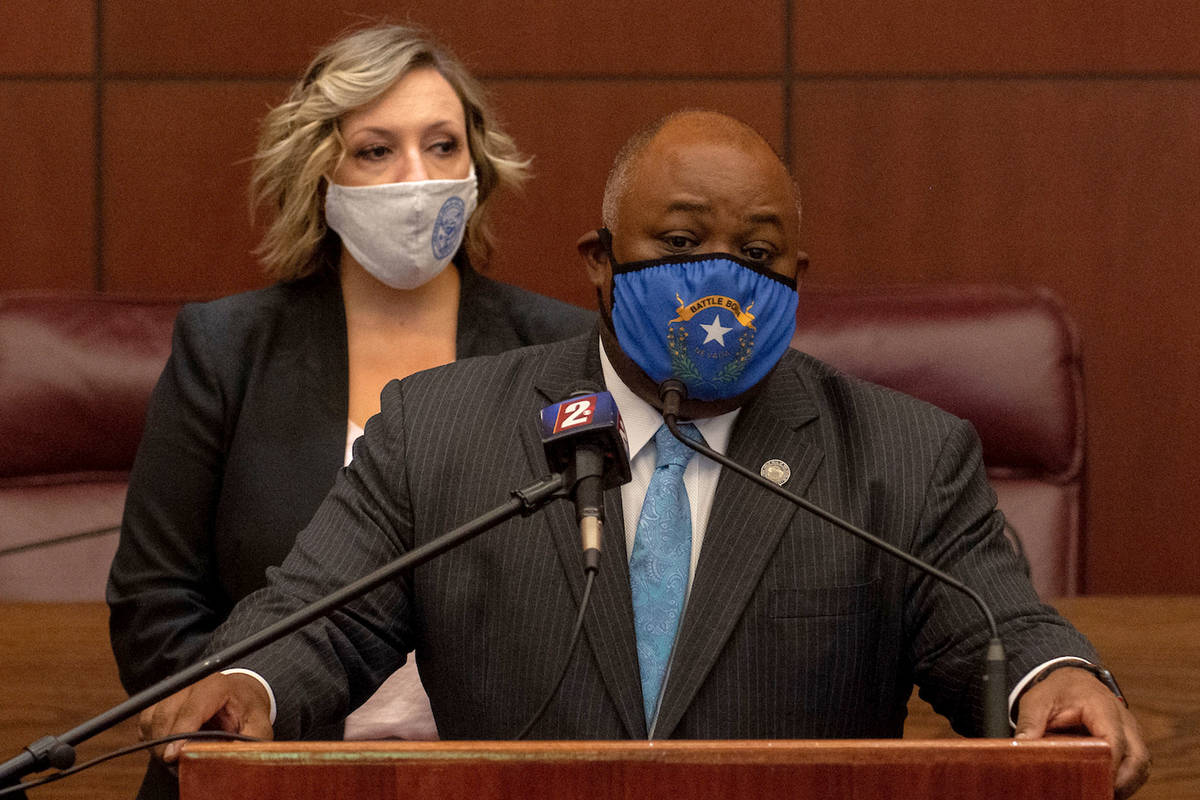 Assembly Speaker Jason Frierson during a press conference with Senate Majority Leader Nicole Cannizzaro at the Legislature on the twelfth day of the 31st Special Session in Carson City on Sunday, July 19, 2020. (David Calvert/Nevada Independent, Pool)

CARSON CITY — The Legislature made a final and substantial tweak Sunday to the last remaining bill of its budget-focused special session, adding $50 million in K-12 funding for at-risk students using federal pandemic aid.

The action, after 12 legislative days that saw grinding progress on a focused agenda to close a $1.2 billion state budget gap, brought the Legislature’s 31st special session to an end, but likely not the state’s pandemic-related budget woes. Still ahead are a possible second session and further fiscal tightening amid uncertainty over another possible round of federal assistance, a resurgent virus spread, and stagnant or worsening economic trends.

As lawmakers debated their final measure on Sunday, Gov. Steve Sisolak said he would postpone calling an expected second legislative session due to concerns over COVID-19. In a statement, he said he had “serious reservations about having our lawmakers convene again for a similar — or longer — period of time in the midst of this spike in our State.”

CARES Act money must be used to address pandemic-related emergencies. The funds to schools will go to support programs schools have had to implement in the face of COVID-19, such as remote learning, and help students who are disproportionately affected by the shutdowns.

“The teachers and the students who know that this upcoming school year is going to be more difficult need some support,” said Senate Majority Leader Nicole Cannizzaro, D-Las Vegas.

The bill took several more hours to get through the Senate. After a public comment period, senators adopted the amendment in committee and then unanimously passed it about 5:40 p.m. Sunday, concluding the main business of the session and clearing the way for adjournment.

“This bill reflects many of the decisions that were made that constitute some of our shared priorities,” said Sen. Ben Kieckhefer, R-Reno, as the Senate prepared to vote. “It reflects the reality of our COVID-ravaged economy, and it fulfills the mission of why we were gathered here under the governor’s call.”

Assembly Speaker Jason Frierson, D-Las Vegas, who sought the amendment, said the revised bill will have the state Department of Education set up block grant programs that schools will be able to apply for, a process that he said would be swift and would prioritize money for at-risk students.

“I don’t think we’re in a position to turn away an opportunity to provide services to kids that are going to be disproportionately impacted by this pandemic,” Frierson said.

In spite of bill’s bipartisan support, Democrats who backed it decried missed opportunities that could have restored even more funding but failed to win necessary support. The Senate twice failed to pass a rewrite of mining taxes long sought by progressives who say the politically favored industry is undertaxed.

“Know that I don’t take this vote lightly and recognize that we must and can do better,” said Sen. Dallas Harris, D-Las Vegas. Sen. Julia Ratti, D-Sparks, added that she’d been “authentically optimistic” the mining tax proposal could have passed.

Other sections of the omnibus bill make various cuts to state agencies. In Saturday night’s revision, the bill halved the originally proposed number of furlough days for state workers, from 12 to six, and restored nearly $139 million to the budget through transfers and reallocation of other existing revenues. The total amount of agency cuts is around $400 million, down from $535 million.

Of the restored money, $81 million is for health care and social services, including $49 million to optional Medicaid services that faced elimination. Another $41.5 million covers the cost of the reduced furloughs — $25.8 million — and also reinstates merit pay for state workers and cancels layoffs.

Significant cuts to the state’s K-12 budget, including $70 million from weighted funds for low-achieving students and $31 million for the state’s Read by Grade 3 program, were not restored in the changes.

In a statement, Sisolak thanked Frierson and Cannizzaro, both Democrats, for passing the bill.

“This program under AB3 represents our shared priorities to support education and healthcare with all financial resources available,” the statement reads. “While we may not be allowed under federal restrictions to use (Coronavirus Relief Fund) dollars to fund budgeted programs reduced or eliminated due to the state’s dramatic revenue shortfall, we can use these dollars for new programs to help those directly impacted by COVID-19.”

With the state’s budget balanced, the funding focus now shifts to the federal level, where state lawmakers and officials are hoping that more relief could be on the way.

The Legislature passed a resolution during the special session calling on the federal government to provide flexible funding to help the state manage its fiscal shortfall. Prior to the session, the Legislature’s Interim Finance Committee created a 12-member subcommittee that will be chaired by Frierson; it will oversee how federal relief dollars are distributed.

Those funds could help the state offset the significant budget holes left behind to K-12 and higher education and to various health care programs.

AB3 specifically laid out the programs the state will prioritize if that federal relief does come, starting with the weighted student funding program and Read by Grade 3 program. Additional funding would then go toward eliminating the remaining state worker furloughs and then to restoring the other various budgets that were cut.

The Legislature formally adjourned the session about 7:15 p.m. and the governor released a statement moments later.

“While all states are facing devastating impacts to their budgets as a result of the COVID-19 recession, Nevada once again finds itself hit the hardest due to an overreliance on an unbalanced revenue structure and the continued need to successfully diversify our economy beyond hospitality and tourism,” the governor said.

He added that all interests should “commit ourselves to the overwhelming consensus that was expressed by both parties during this session: That there are longstanding, structural problems that must be addressed to ensure Nevada is no longer the most vulnerable state in the nation every time the economy takes a downturn.”