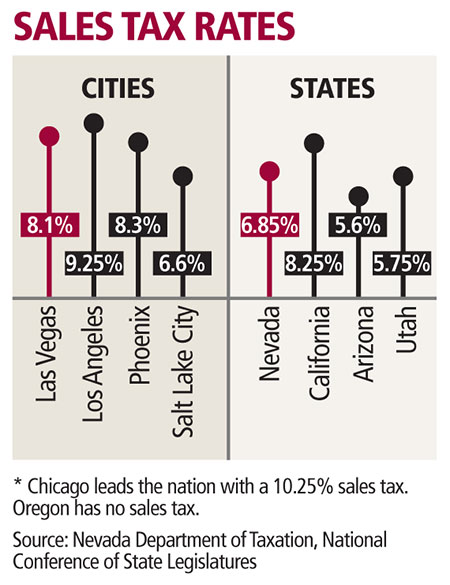 CARSON CITY — This July 1 forever might be remembered as Black Wednesday in the annals of Nevada state government.

Most of the record $1 billion in tax increases approved by the 2009 Legislature will go into effect on that day. And for the first time since the end of World War II, state employees will be hit with pay cuts.

The sales tax rate in Las Vegas and Clark County on Wednesday will jump to 8.1 percent as the result of a 0.35 percentage point increase vetoed by Gov. Jim Gibbons but overridden by the Legislature.

The Nevada sales tax rate will be 6.85 percent, eighth highest among the 50 states. Clark County has a higher rate because of locally approved school, police and highway bond issues. Five states, including Oregon, still have no state sales tax.

Mary Lau, executive director of the Retail Association of Nevada, said there is a breaking point at which residents will reduce their purchases because of the high sales tax. She doesn’t know whether that point has been reached in Nevada.

Some people might decide to go to sales tax-free Oregon for a major purchase such as a refrigerator, though the rising gasoline prices might curb them from such a drive.

Forget about buying a car out of state, though.

The Nevada Department of Motor Vehicles makes sure appropriate sales taxes are collected on cars, regardless of where they were purchased.

Lau does not see a quick end to the recession, predicting that Gibbons will be forced to call a special session of the Legislature in the fall to deal with continued declines in tax revenues.

So far this year, Nevada is the only state to boost its sales tax rate, according to the National Conference of State Legislatures, though three other states are on the verge of increasing their rate.

Arizona is eyeing a 1 percentage point increase and numerous states have reduced exemptions to their sales taxes.

The largest tax increases coming Wednesday are on business. The annual business license fee, now $100, will double to $200. The modified business tax, paid on companies’ payrolls, also will nearly double — going from 0.63 percent to 1.17 percent.

Larger companies, however, will be hit with payroll tax increases of more than 80 percent.

But businesses big and small alike also must pay the higher sales tax for goods.

Carole Vilardo, president of the Nevada Taxpayers Association, said most small business will have a greater total state tax bite than previously because of the sales tax increase.

The hotel room tax also is increasing by 3 percentage points, but to no more than 13 percent, in Clark and Washoe counties.

Starting on Sept. 1, taxes also will be raised on car registration fees through a change in the depreciation allowance. The average car owner will pay about $25 more per year, according to the DMV.

Overall in the next two years, state government will spend $6.9 billion on general fund budgets, or about $600 million more than it actually spent during 2007-09.

They will be slapped with a 4.6 percent pay reduction by taking an unpaid furlough day each month. Their longevity and step increases also have been canceled.

University and community college professors and employees also were subject to the furlough. But Budget Director Andrew Clinger noted that the Board of Regents control their salaries. In a June 19 meeting, regents decided that under current contracts, professor pay cannot be reduced for another year. Regents raised tuition and kept salaries for professors at current pay levels, but support workers must take a furlough day per month, like other state employees.

Most teachers around the state will receive 4 percent less pay, under legislative action, except for in Clark County, where an agreement was reached with the school district to maintain pay while increasing class sizes and not filling some positions.

"This time our customers, the taxpayers, are going to see the consequences," said Dennis Mallory, the chief of staff of the American Federation of State, County and Municipal Employees Local 4041. "They are going to be longer lines at the DMV. They aren’t going to get as quick of response for requests for any services."

Mallory added that Nevada already ranked at the bottom among the 50 states in the number of public employees per capita.

According to a Las Vegas Chamber of Commerce study last year, there are 41.4 local and state government employees per 1,000 residents, the lowest in the nation.

Tom Jacobs, a Department of Motor Vehicles spokesman, said it’s unknown whether lines will be longer because of the furloughs.

Offices in Reno, Sparks and Gardnerville were closed, but staffers were transferred to other offices. Not as many people are buying cars or applying for licenses, he added.

"We don’t expect a spike in waiting times because of the furloughs," he said. "We don’t really know yet."

Former state Archivist Guy Rocha said he knows of no other time since World War II, and possibly earlier, when employees have been ordered to take pay cuts.

Mallory added that many state employees with near 30 years of service have decided to retire rather than continue to work in an uncertain economy.

Others want to quit, he added, but they are "trapped in their jobs," unable to find alternative employment during the recession.