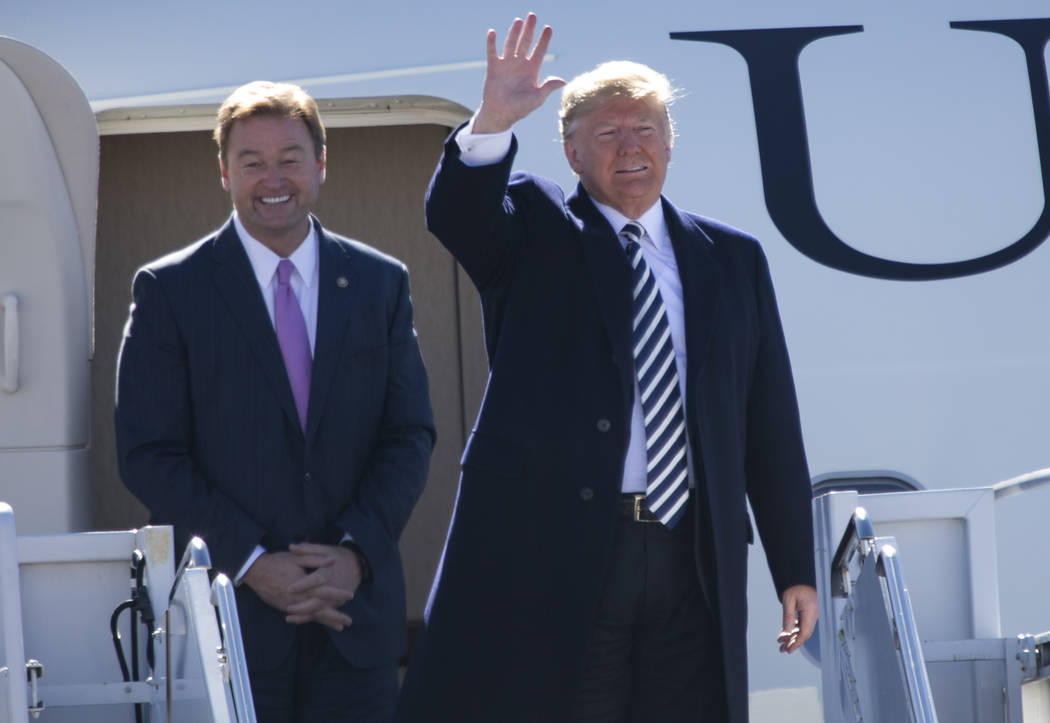 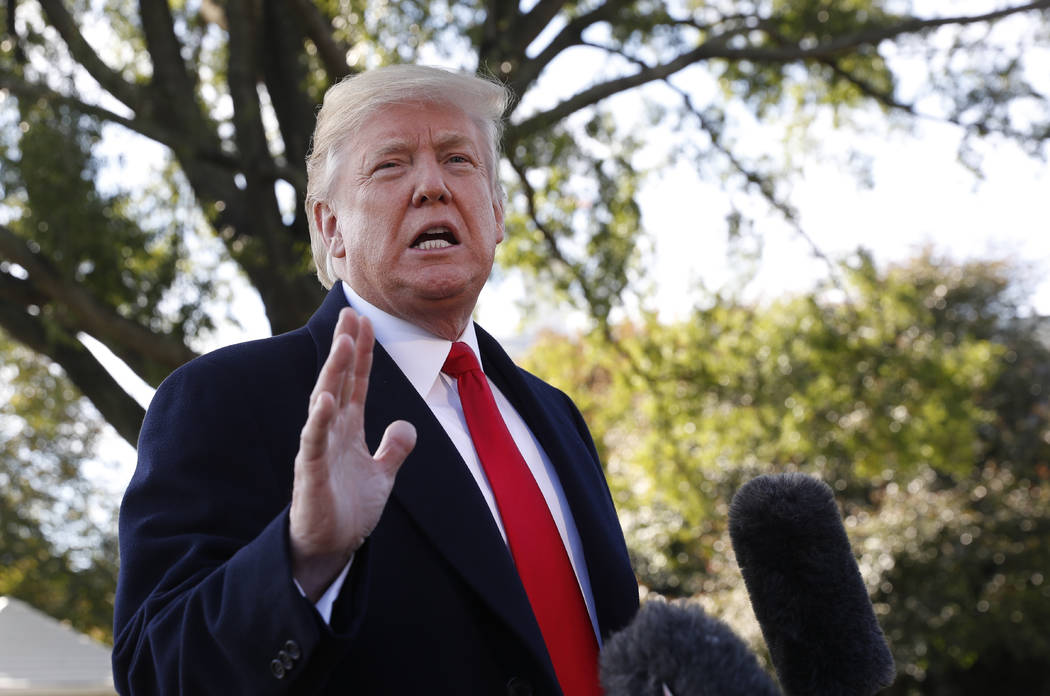 President Donald Trump stops to talk to members of the media before walking across the South Lawn of the White House in Washington, Monday, Oct. 22, 2018, to board Marine One helicopter for a short trip to Andrews Air Force Base, Md., en route to Houston. (AP Photo/Pablo Martinez Monsivais)

WASHINGTON — As he stumped for Republican candidates in Elko, President Donald Trump said he is “very inclined to be against” Yucca Mountain as a nuclear waste facility — a statement that conflicts with his administration’s first two budget proposals.

Asked about his position on a Yucca Mountain nuclear waste repository, Trump told Reno station KRNV News 4: “I think you should do things where people want them to happen. So I would be very inclined to be against it and we will be looking at it very seriously over the next few weeks. And I agree with the people of Nevada.”

It was a surprising answer given that the White House Office of Management and Budget twice has proposed spending $120 million to restart licensing for the Yucca Mountain facility, about 100 miles northwest of Las Vegas. The House passed spending plans that included the Yucca funding in 2017 and 2018, but the Senate Appropriations Committee dropped the items.

“The president has made over 5,000 false and misleading claims since he was sworn into office, and you can add this outright lie to the list,” Rep. Dina Titus, D-Nev., responded. “His administration has taken significant steps to revive the Yucca Mountain project, including requesting over $240 million in his budget to restart the licensing process and his appointment of one of Yucca’s biggest proponents, David Wright, to the Nuclear Regulatory Commission.”

Trump’s stand on Yucca has been uncharacteristically murky from his days on the campaign trail.

Asked about his position on Yucca Mountain in October 2016, Trump told KSNV-TV, Channel 3, “I will take a very strong look at it and the next time you interview me, we’ll talk about it for five minutes.”

Leading up to the 2016 election, however, Trump failed to take a stand either way on Yucca.

Then, in February 2017, Trump’s OMB released a $4.4 trillion spending blueprint that included $120 million to restart the licensing process.

Energy Secretary Rick Perry told a House committee he believed the administration had a “moral obligation” to resume licensing.

In November, OMB Director Mick Mulvaney told reporters it was his decision to put the $120 million into Trump’s budget.

“We have to put this stuff someplace,” he said. “So the $120 million you saw, it was actually very minor. I’m surprised it got that much attention as it did. It’s only to explore the possibility of licensing.”

Mulvaney said he could not recall if he discussed Yucca Mountain with Trump, but he knew that he had talked to Perry.

Asked about the president’s comments over the weekend, spokeswoman Lindsay Walters repeated Trump’s language about “very seriously” considering the issue in the coming weeks.

Congress designated Yucca Mountain as the site for a national repository for nuclear waste in 1987. Political opposition has prevented the site from opening.

Sen. Dean Heller, R-Nev., who joined Trump on Air Force One for the ride to Elko, has opposed the administration’s Yucca Mountain funding. “A state without a single nuclear power plant should not have to shoulder the entire nation’s nuclear waste burden,” Heller argued in February.

Heller spokeswoman Megan Taylor said the senator personally talked to Trump “about the danger of bringing nuclear waste through the state of Nevada” and is encouraged he is taking a “serious look at the threat that Yucca Mountain would pose to Nevadans and (the) booming economy.”

“While I’m encouraged to see the president finally say that he will listen to our state and change course on this dangerous plan for nuclear waste, we must continue to hold this administration accountable and ensure that the White House and Republican leaders in Washington follow through on actually abandoning their efforts to force this reckless project down our throats,” Rosen said in a statement Monday.

Longtime Nevada GOP political strategist Sig Rogich also was encouraged. “I viewed it as a very positive remark, that he listens to Nevadans and Nevadans have said overwhelmingly they do not want Yucca,” Rogich said.

Energy policy analyst Katie Tubb of the conservative Heritage Foundation does not see a disconnect between Trump’s misgivings and his administration’s attempts to fund licensing, which was suspended under President Barack Obama.

“I think it’s appropriate and wise to go through the licensing process and then have the discussion again. That’s how you get to a science-based” conclusion to proceed or scrub the project, Tubb said.