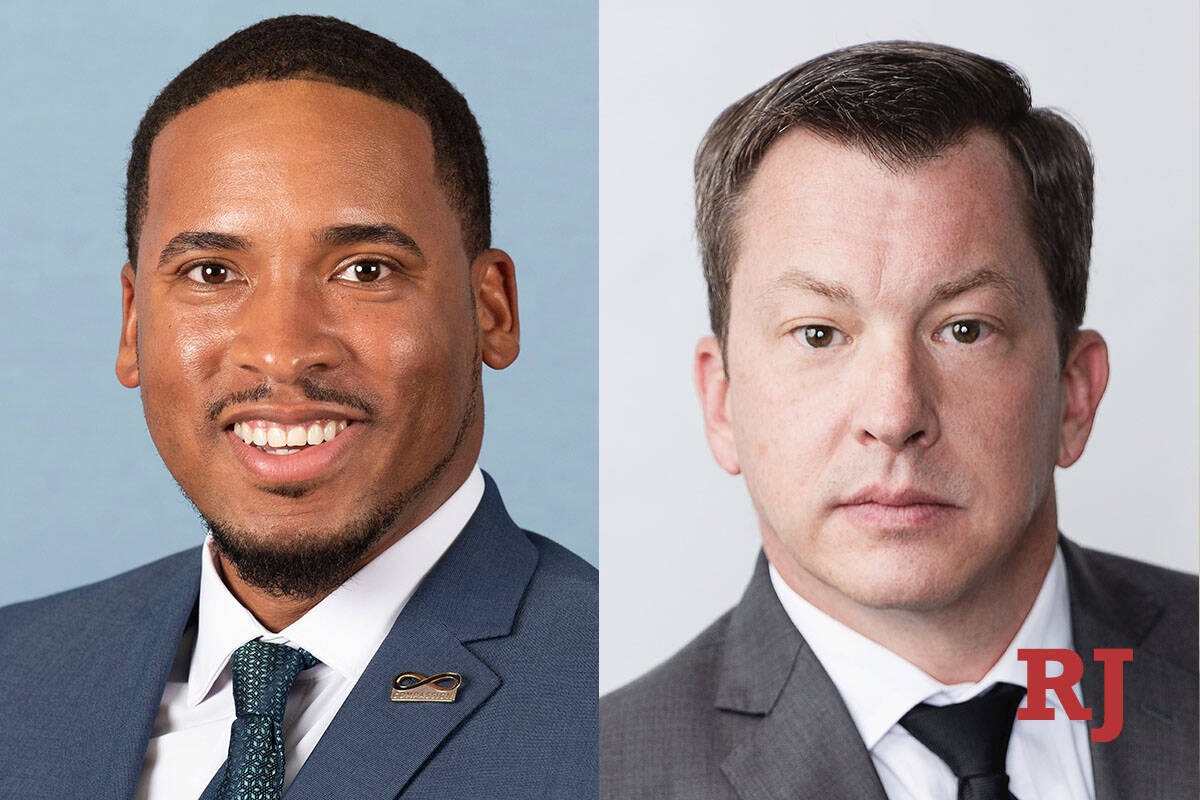 Two political newcomers are vying for an open seat for Assembly District 13 in the northwest valley.

Republicans hold a slight registration advantage among active registered voters in the district. There are about 14,600 active Democrats and about 16,400 Republicans. The district is currently represented by Republican Tom Roberts, who did not seek re-election and instead ran unsuccessfully for Clark County sheriff.

Republican Brian Hibbetts and Democrat Will Rucker want to take his place. Each says he is concerned about public safety, schools and water conservation.

Hibbetts, a retired 27-year veteran in the Las Vegas Metropolitan Police Department, said his background in law enforcement taught him that helping one person can make a difference and can give him better insight into policymaking.

“I think a lot of our politicians, depending on what their background is, don’t deal with individual people very much,” Hibbetts said. “Where in law enforcement, that’s what you do and you see how things affect them. I would see where laws were passed and I would be in charge of enforcing them. And whether I agreed with them or not, that’s what I had to do. But I would see the real world consequences of what those laws did.”

Hibbetts bested three other Republicans in a crowded primary for the open seat. He received 31.5 percent of the primary vote.

The biggest issues facing Assembly District 13 relate to the economy and inflation, Hibbetts said. Though the state has little power in controlling inflation, Hibbetts said he believes lowering the sales tax could relieve some economic stress. If elected, he said he wants to focus on eliminating wasteful government spending through better contracts and watching out for efficiencies in the budget.

Improving K-12 education in Southern Nevada is one of Hibbetts’ top priorities. He said he wants to start with improving enforcement of 2015 and 2017 laws that called to transfer power away from Clark County School District central administration to local schools.

“I think the education component of it is the central portion (in improving other issues in Nevada),” he said. “Because if we have a better education system, then we have the educated workforce for the businesses and industries coming. And not only that, if I’m a business owner, I’m not going to go some place where my employees can’t put their kids into a quality school.”

Rucker, a faith leader and nonprofit professional, said he’s seeking the seat because he thinks the state needs some “sensible changes” to reach its potential. He also saw an opportunity to run this cycle because the area’s redistricting included more residents of North Las Vegas.

One of his priorities is addressing the impact of money in politics, he said.

“If the only candidates that can get through to actually occupy the seats are those that are driven by money, then you’re going to have those types of politicians making decisions,” Rucker said. “And those are the areas that are going to drive how they approach government.”

Rucker supports the ballot initiative that, if approved, would implement rank-choice voting. He said the goal should be to make a more equitable campaign process for those without large financial backing. He also would support changes to the structure of the Legislature because currently, only people who can realistically take several months off from their jobs to attend the biennial sessions can serve.

“In order to make the Legislature more reflective of Nevada, we have to make it so that anyone in Nevada that wants to serve can actually do that and are not prohibited because of the immense financial sacrifice that’s required, the time sacrifice,” he said. “It becomes exclusionary because most folks’ jobs won’t let them go away for four months at a time.”

Voters in the district are concerned about water and public safety, he said – and he views them as connected issues because they are crucial to survival.

“Public safety is more than just how many police officers are on the street,” he said. “It’s the quality of education our kids are receiving. It’s ‘do we actually have access to health care’? It’s, ‘how are we developing’? It’s, ‘are we providing people a community in which their mental health is actually sustained and not diminished’?’”

Rucker beat out two other Democrats in his party’s primary. He received 48.8 percent of the primary vote.