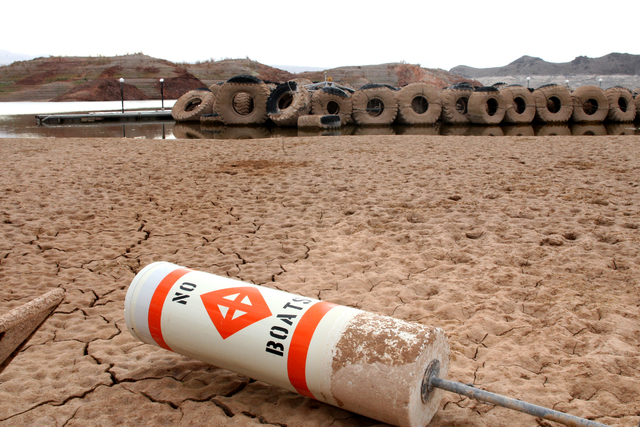 A buoy lies in the dried mud at Lake Mead's Echo Bay Marina in 2014. The U.S. and Mexico have reached a new treaty agreement that is expected to slow the decline of the lake and keep more water in the overdrawn and drought stricken Colorado River. (Michael Quine/Las Vegas Review-Journal) 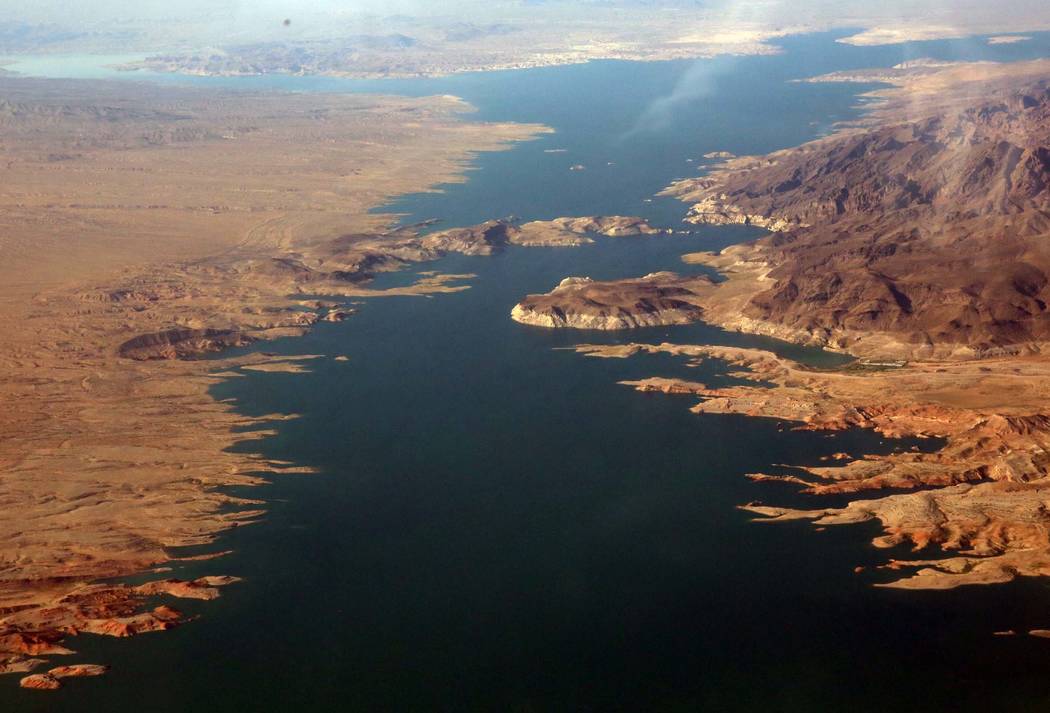 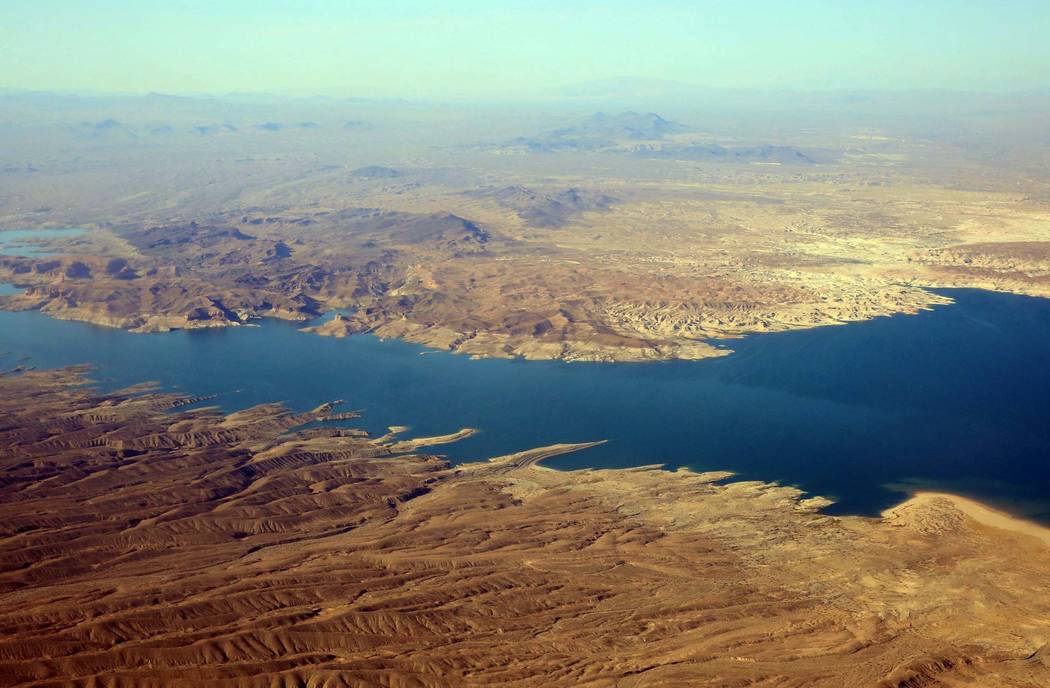 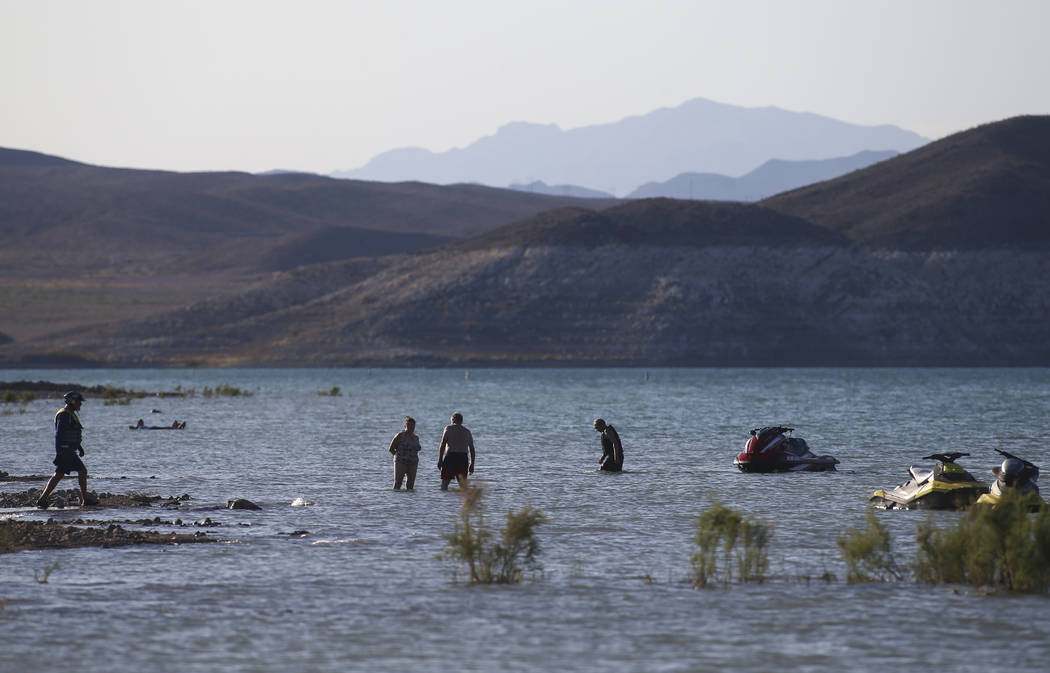 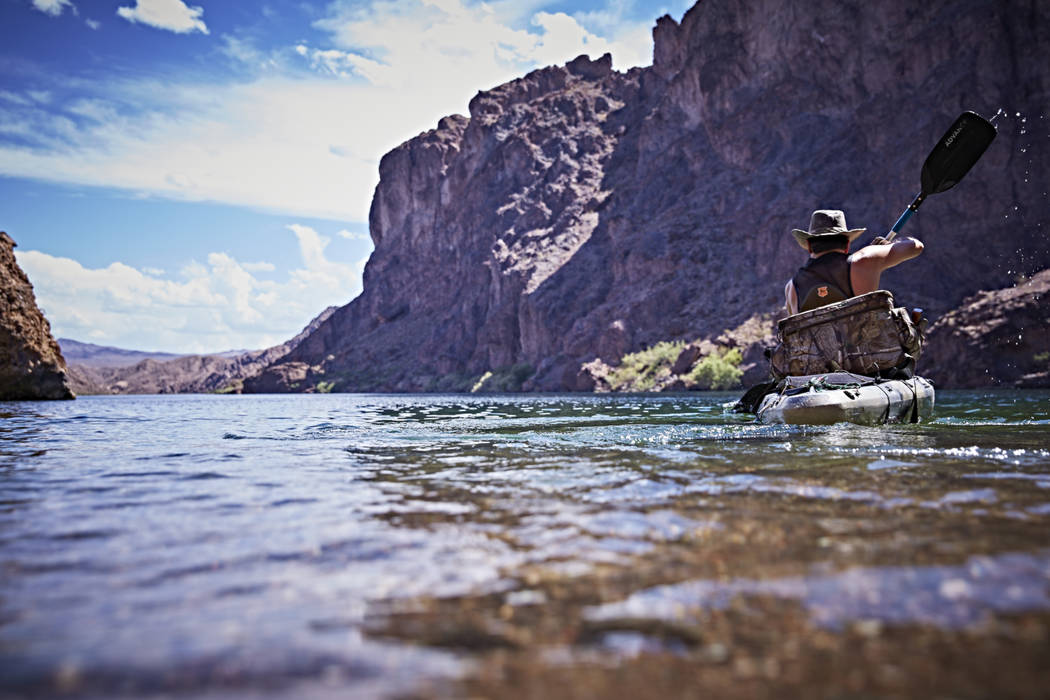 A kayaker paddles on the Colorado River downstream from Hoover Dam. A new treaty agreement between the U.S. and Mexico is expected to keep more water in the overdrawn and drought stricken river. (Forever Resorts)

Officials from both sides of the U.S.-Mexico border on Wednesday signed a new water pact that brings Mexico in as a full partner on the Colorado River and could boost Lake Mead.

The historic agreement, known as Minute 323 to the Mexican Water Treaty of 1944, spells out how much Mexico would have to reduce its river use in the event of a shortage on the Colorado and how much extra water the nation would get in a surplus.

It also opens the door to more cross-border cooperation on water efficiency projects — including some paid for by the Southern Nevada Water Authority — that could help slow the declining water level in Lake Mead.

To that end, Mexico has agreed to a series of voluntary reductions in its Colorado River use to prop up the reservoir east of Las Vegas and stave off more severe mandatory cuts.

Nevada, Arizona and California have agreed in principle to similar voluntary cuts as part of a so-called Lower Basin Drought Contingency Plan. Water managers hope the three states will finalize that plan sometime next year.

The treaty amendment was signed by representatives from the International Boundary and Water Commission of the United States and Mexico during a Sept. 21 meeting in Ciudad Juarez, Mexico. It took effect Wednesday, after the governments of the two countries approved it.

Two years in the making

Water managers and negotiators gathered in Santa Fe Wednesday afternoon to announce the completion of the deal, which was hashed out over more than two years with input from water agencies, conservation groups and other interested parties.

Water Authority General Manager John Entsminger, who traveled to Santa Fe for the announcement, said the agreement benefits everyone involved.

“For Southern Nevada, we gain more tools to protect our community’s water supply, and Mexico gets both a valuable water reserve and increased flexibility in managing their water resources,” Entsminger said in a written statement. “The Colorado River Basin drought continues to be a serious issue, and this agreement shows how the seven states, the country of Mexico and our federal government are taking proactive steps to collaboratively address the situation and reduce the potential for shortages.”

The treaty amendment also sets aside some river water and funding to support environmental restoration work south of the border, where the Colorado River Delta has been left dry by upstream diversions to farms and cities in the U.S. and Mexico. Aside from a few isolated floods, the river stopped emptying into the Gulf of California in the 1960s with the construction of Glen Canyon Dam and the creation of Lake Powell on the Utah-Arizona border.

The new agreement extends and expands upon a 2012 deal between the two countries that allowed Mexico to store some of its unused river water in Lake Mead. That pact, known as Minute 319, was due to expire at the end of the year.

Under Minute 323, the water authority, the U.S. Bureau of Reclamation and water agencies in Arizona and California will provide up to $31.5 million for water efficiency improvements in Mexico through 2026. In return, the contributing agencies would share as much as 229,100 acre-feet of Colorado River water, which is almost enough to supply the entire Las Vegas Valley for one year.

Mexico is expected to use the money to line canals, repair pipes, curb runoff from farm fields and make other water-saving improvements, mostly to its thirsty agricultural sector.

The Southern Nevada Water Authority will get 27,275 acre-feet of water for its initial $3.75 million investment south of the border.

If additional projects are identified after the first round of work in Mexico is done, the authority would chip in up to $3.75 million more in exchange for another 27,275 acre-feet from the river.

One acre-foot of water will supply two average valley homes for just over a year. About 90 percent of the valley’s water supply comes from the Colorado by way of Lake Mead.