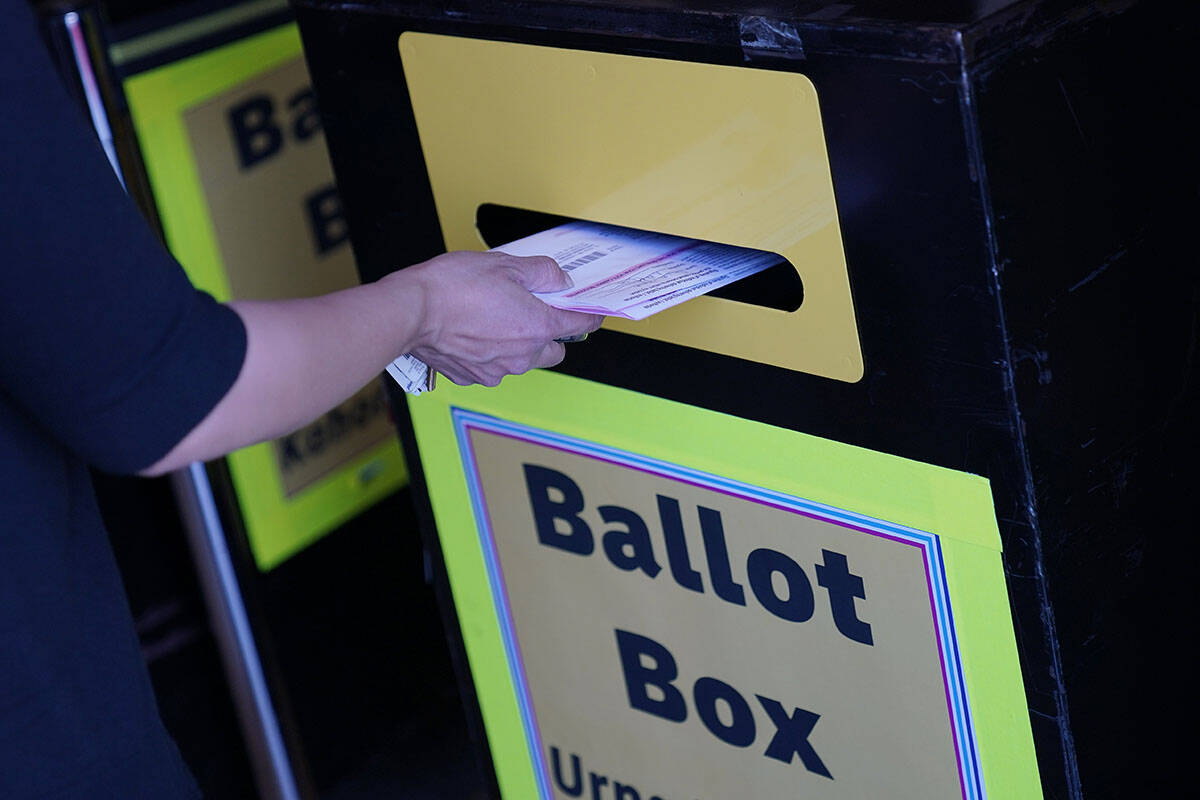 In this Oct. 29, 2020, file photo, a person places a mail-in ballot in a drop box at the Clark County Election Department in Las Vegas. (AP Photo/John Locher, File)

Nevada voters could radically reshape the way elections are conducted in the state under Question 3 on the November ballot.

The measure — proposed by voter initiative — would create open primaries and ranked choice voting in general elections in contests for Congress, constitutional officers and the state Legislature.

In an open primary, all candidates from all parties (including nonpartisans) run as a single group. The top five candidates then advance to the general election, where voters rank them according to preference. If no candidate gets 50 percent of the vote, the candidate with the fewest votes is dropped, with second-choice votes reallocated to the remaining field until one person reaches 50 percent.

The initiative has caused some confusion, and advocates for and against it find themselves having to explain what it means before explaining why they favor it or not.

Proponents say the new system would give voters more options and cut down on the most extreme, partisan candidates winning primary elections. Currently, Nevada is a closed-primary state, which means only Democrats can vote for Democrats and only Republicans for Republicans. Critics say that primaries — where the most active members of the major parties’ base turn out — can produce nominees who have less cross-party appeal in a general election.

“The current partisan election process excludes over one-third of all Nevada voters from voting in taxpayer-funded primary elections,” said Joe Brezny, campaign manager of Nevada Voters First, a political action committee that backed the initiative. “This closed primary process is controlled by the two major political parties and party bosses. Open primaries would ensure the voice of every voter is heard, and no voter would be excluded from exercising their right to vote.

“Ranked choice is a simple change to our general elections that allows voters the opportunity to rank up to five candidates who best represent their positions, rather than having to choose between the ‘lesser of two evils,’” Brezney added. “Implementing ranked-choice voting would ensure candidates have to listen to what the majority of voters want, not just the two major parties and political insiders.”

Opponents, including members of both political parties and high-profile elected officials including Democrats such as Gov. Steve Sisolak and U.S. Sens. Catherine Cortez Masto and Jacky Rosen, say ranked choice voting is confusing, time-consuming and would lead to more ballots being thrown out.

Under the new system, it’s possible that some parties could be shut out entirely of the general election, according to the arguments against passage. “In many districts, the only choices in November might be between candidates of the same party, or among fewer parties’ candidates than currently,” the arguments read. It would also force underfunded independent candidates to compete in open primaries with well-funded members of established parties.

Also, opponents argue, voters may be disenfranchised: “For example, if a voter chooses to rank only one candidate, their ballot might be excluded from the final count — as if they didn’t show up for the election at all. Meanwhile, voters who selected multiple candidates will have their votes counted multiple times,” arguments against the measure read.