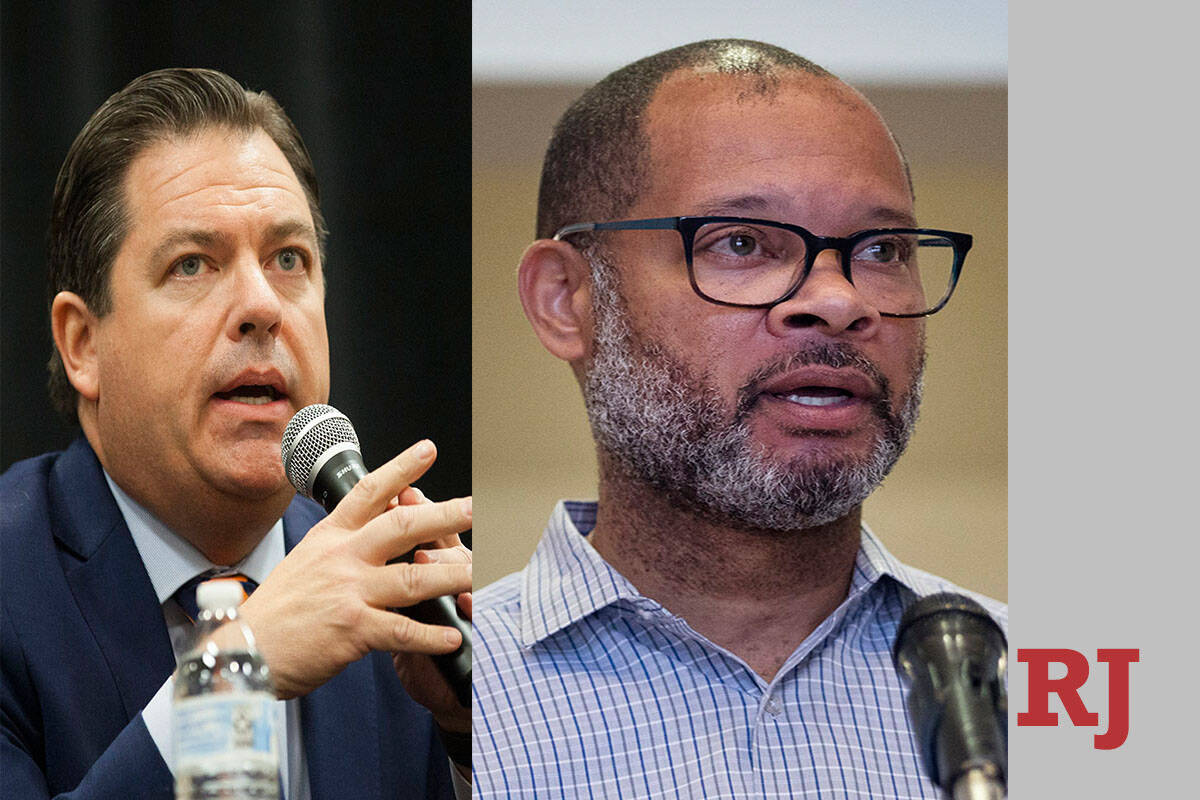 Anybody who was in Carson City in the middle part of the last decade would have been shocked at the list of names of Republicans crossing the aisle to endorse Democratic Attorney General Aaron Ford.

Roberson and Ford fought constantly in the upper house when their tenures overlapped between 2012 and 2018, most particularly in 2015, when Republicans took over the entire Legislature. Roberson saved a particularly controversial school reorganization bill until the last few hours of the 2015 session, bringing it up and passing it over the loud, shouted objections of Ford and his Democratic caucus.

Ford returned the favor in 2017, after Democrats had regained control of the Senate, making a deal with then-Gov. Brian Sandoval that avoided funding for a controversial voucher-style program for education.

To say there was no love lost between the two would be dramatically understating the case.

But things have changed.

The Republican endorsements represent “a stunning rebuke of their own party’s nominee for attorney general, Sigal Chattah,” a Ford news release says. Chattah is best known for suing Gov. Steve Sisolak over his pandemic restrictions, and once mused that Ford should be “hanging from a (expletive) crane,” a remark she attributed to her Israeli heritage. Ford is Black, and has said the remark evoked lynchings and was racist.

Chattah said she wasn’t concerned about the endorsements, having handily won her primary. She called the Republicans — especially Roberson — insufficiently committed to the GOP cause, and said the lobbyists in the group were only covering their political and financial interests.

But the endorsements were still a powerful case going into the general election. Ford said on the Thursday edition of “Nevada Newsmakers” that he would not debate Chattah because of the crane remark.

But since turnabout is fair play in elections, this raises an interesting question: Will we see Democrats crossing the aisle to endorse Republicans? Democrats for Joe Lombardo? Democrats for Adam Laxalt? Stay tuned!

Speaking of cross-party endorsements: There are a few Republicans who have come out in support of senior U.S. Sen. Catherine Cortez Masto, but don’t go looking for a formal group of GOPers to support her, the way they did for former Senate Majority Leader Harry Reid in 2010. There are a couple of reasons.

First, tenure and profile: Cortez Masto has just six years in the U.S. Senate under her belt, although she’s made great use of that time to advance. She has an unusually large number of committee seats for a freshman – Finance, Banking, Housing and Urban Affairs, Energy and Natural Resources and Indian Affairs. And she even chairs an energy subcommittee on public lands, forests and mining, a perfect job for a Nevadan.

She also took on a thankless job — chairing the Democratic Senatorial Campaign Committee in the 2020 cycle, when everybody assumed Republicans would retain control of the chamber. But thanks to a series of events culminating in two Democratic victories in Georgia, Cortez Masto delivered a 50-50 Senate, with Democrats in charge.

Still, that’s nowhere near where Reid was in 2010, leading the Democrats in the Senate in the most powerful position ever held by a Nevadan in Washington, D.C. Retaining Reid’s clout and power in the Senate was essential for a small state such as Nevada.

Second, Laxalt is no Sharron Angle, the former Republican assemblywoman who was Reid’s opponent in 2010. Angle was given to outlandish remarks (she compared herself to Moses and Jesus, mused about “Second Amendment remedies,” suggested rape victims make lemonade out of lemons and told a classroom full of Latino students that some looked Asian). Laxalt has not and will not make mistakes such as those, which makes opposing him from within the GOP slightly harder.

That’s not to say that Cortez Masto doesn’t have any GOP supporters. Di An Putnam, the mayor of Winnemucca, Ely Mayor Nathan Robertson and former Churchill County Commissioner Carl Erquiaga have all come out in support of Cortez Masto. There will undoubtedly be others.

But if it’s an organized, election-shifting movement you’re looking for, you won’t find it, at least not until Cortez Masto settles in the majority leader’s suite.

It’s a race in Henderson

Melissa Woodbury, who served in the Nevada Assembly representing the 23rd District in Henderson from 2008-2018 is considering a return to politics, this time as a member of the Henderson City Council. (She’s seeking the Ward 1 seat vacated by newly elected mayor Michele Romero.) Woodbury announced July 21 she’d seek the seat, after retiring from a 27-year career as a teacher. She said education and helping small businesses will be her priorities, and reminded the public that she is descended from Clark County political royalty.

“My father, Bruce (Woodbury), was the longest serving Clark County Commissioner when he retired, and he taught me that integrity, hard work, and dedication to representing your neighbors is what is required of great public servants,” Woodbury said.

But while Woodbury was first out of the gate, she won’t be the only candidate seeking the job.

On July 26, Metropolitan Police Department Deputy Chief Jim Seebock announced that he, too, would seek the seat, represented by Liz Trosper, who has helped many successful Henderson candidates over the years.

“As the city continues to mature it must address issues surrounding homelessness, redevelopment needs, and supporting our first responder community so they can stay in front of violent crime trends before they end up here,” Seebock said in a statement announcing his candidacy.

You knew it was coming

Ever since former President Donald Trump came to town and said Las Vegas was “a cesspool of crime” with Lombardo on stage, we’ve been waiting for the attack ad from Sisolak. It dropped July 26.

It starts by touting Sisolak’s funding for law enforcement in Nevada, and contrasts that with a rising homicide rate. (Rates were up in 2021, but have fallen so far this year.) Before calling Lombardo a “failed sheriff,” the ad notes that even former President Donald Trump calls Nevada — what’s the phrase again? — oh, yeah, “a cesspool of crime.”

We’re old enough to remember when the endorsement of a former president still popular with the base was a good thing in an election!

“The fact that so many candidates are running hard on gun safety is further proof that the political calculus has changed, and that supporting common-sense gun laws isn’t just good policy — it’s also good politics,” said John Feinblatt, president of Everytown for Gun Safety Action Fund.

Former gubernatorial candidate and ex-U.S. Sen. Dean Heller has called on losing governor candidate Joey Gilbert to drop his lawsuit contesting the election results and allow Lombardo to focus on his general-election contest against Sisolak.

“Joe Lombardo won the Republican nomination for Governor fair and square, and as a former Nevada Secretary of State, I’ve seen lawsuits like this far too often. They’re almost always counterproductive and can do serious damage to the reputation of the Republican Party,” said Heller. “Now is the time to put an end to inter-party squabbling and unite in support of Joe Lombardo and fire Steve Sisolak in November for the good of the people of Nevada. Joey Gilbert promised publicly and repeatedly to support the Republican nominee for Governor. I urge him to keep his word.”

Then again, Heller did tell the Review-Journal that the last “safe, secure” election in Nevada was during his tenure as secretary of state, which ended in 2006.