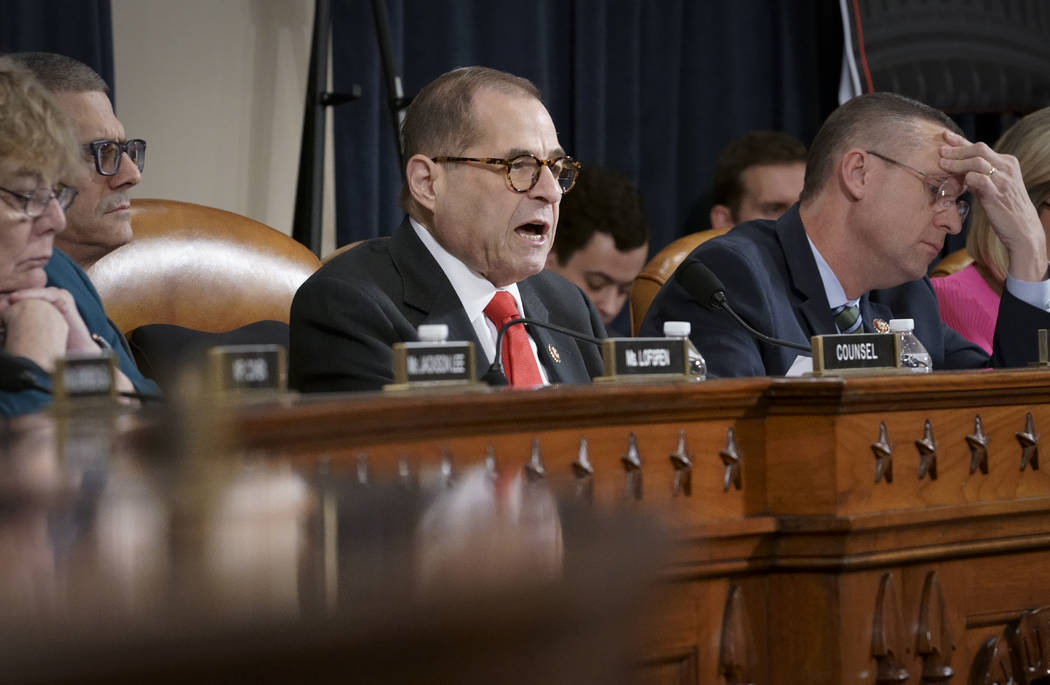 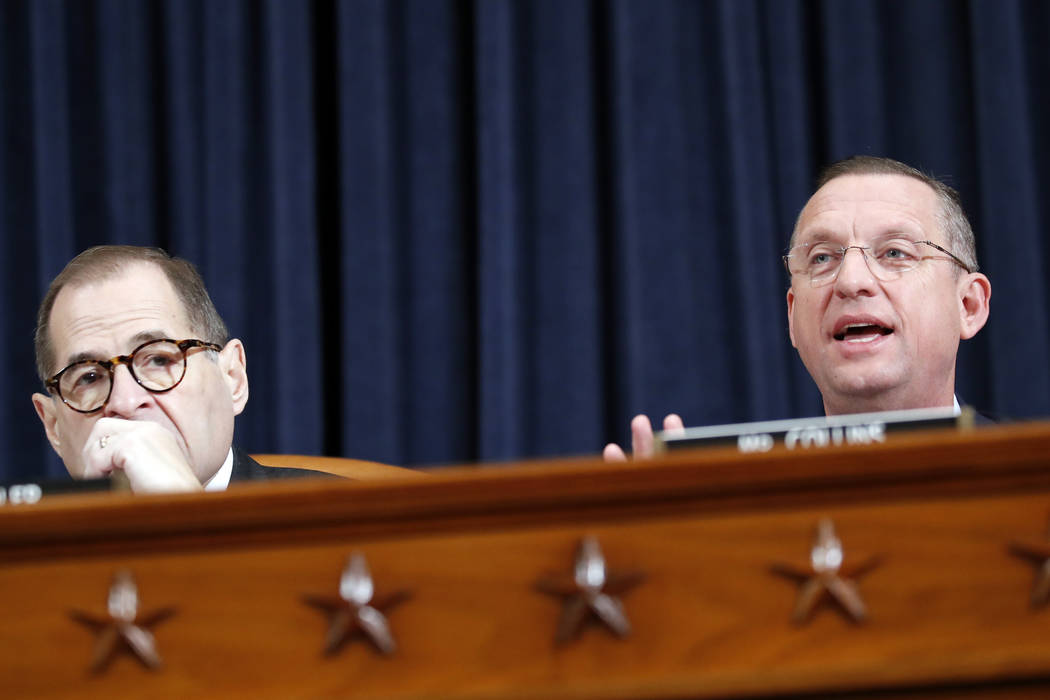 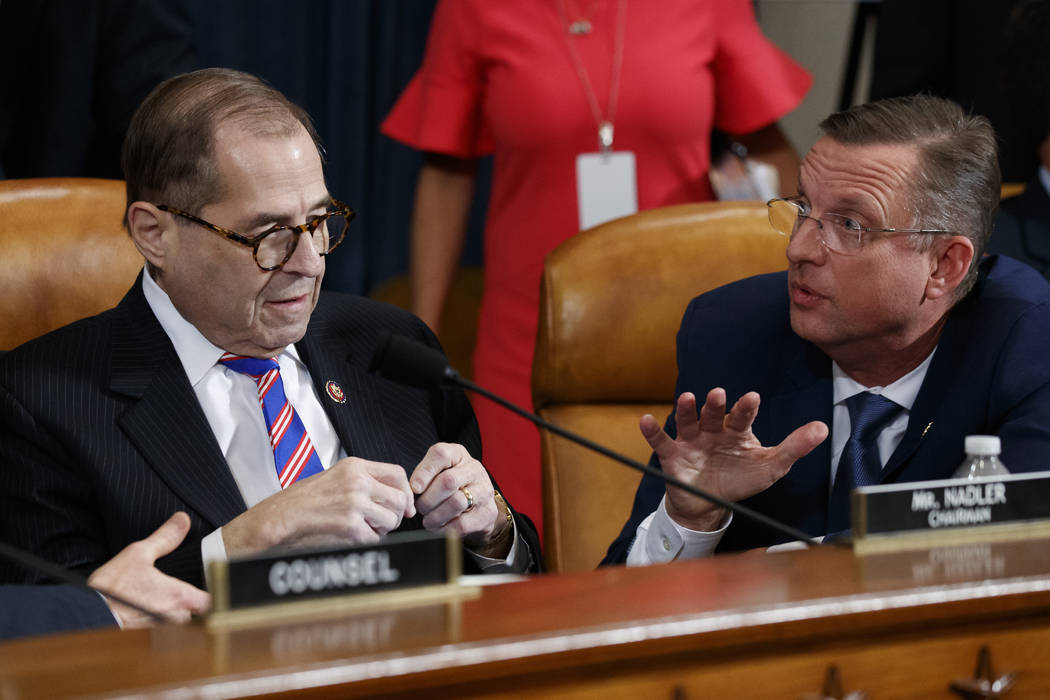 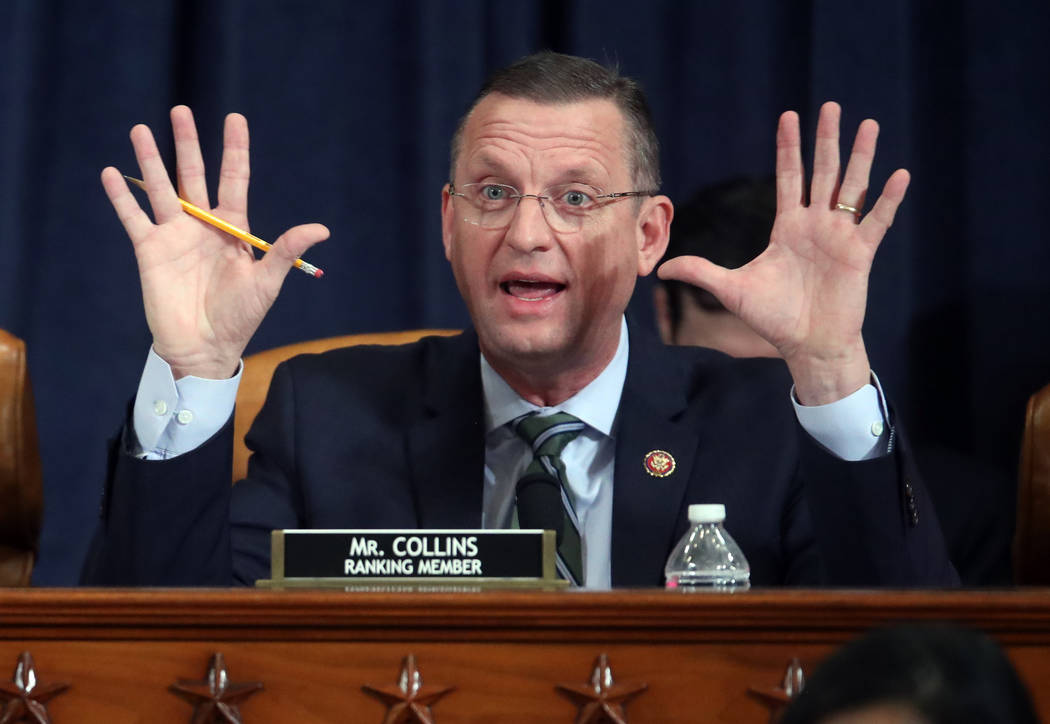 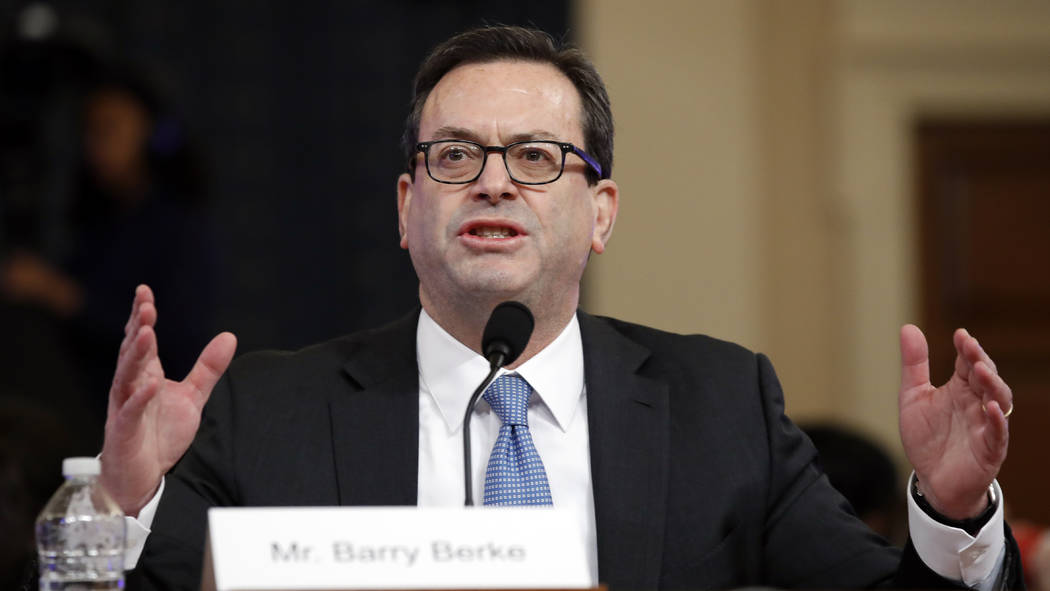 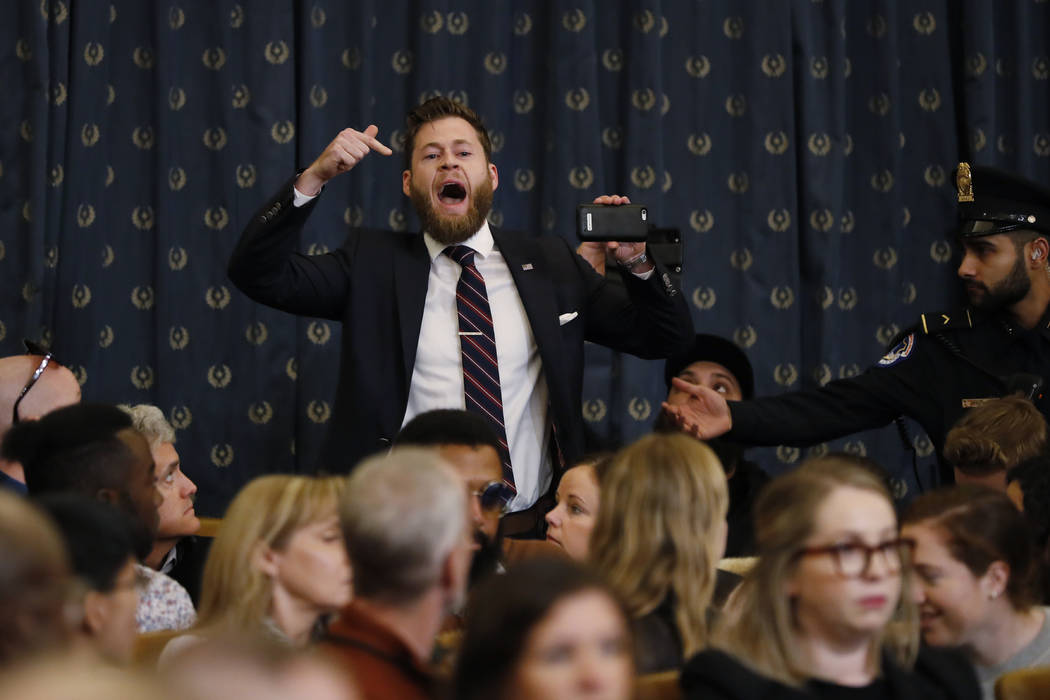 A protestor speaks out as the House Judiciary Committee hears investigative findings in the impeachment inquiry of President Donald Trump, Monday, Dec. 9, 2019, on Capitol Hill in Washington. (AP Photo/Andrew Harnik) 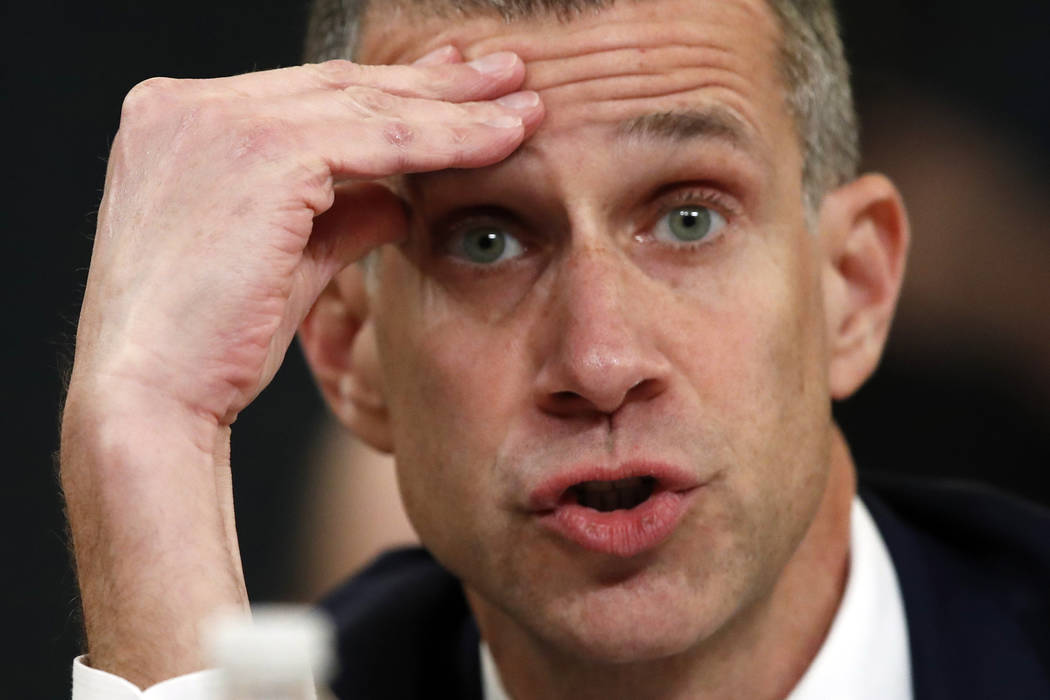 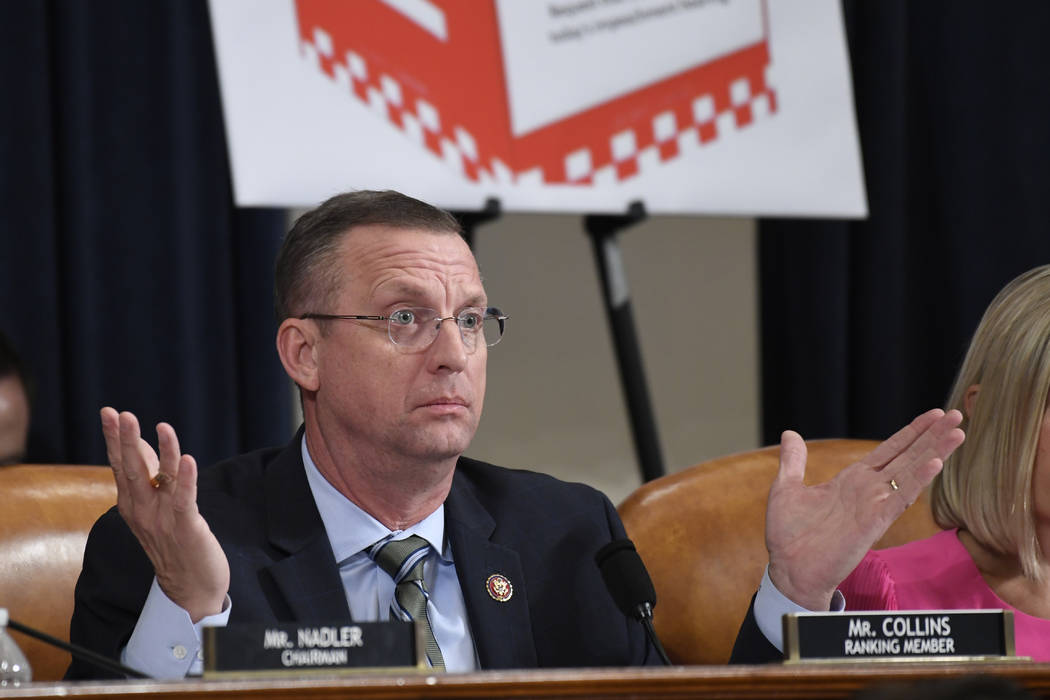 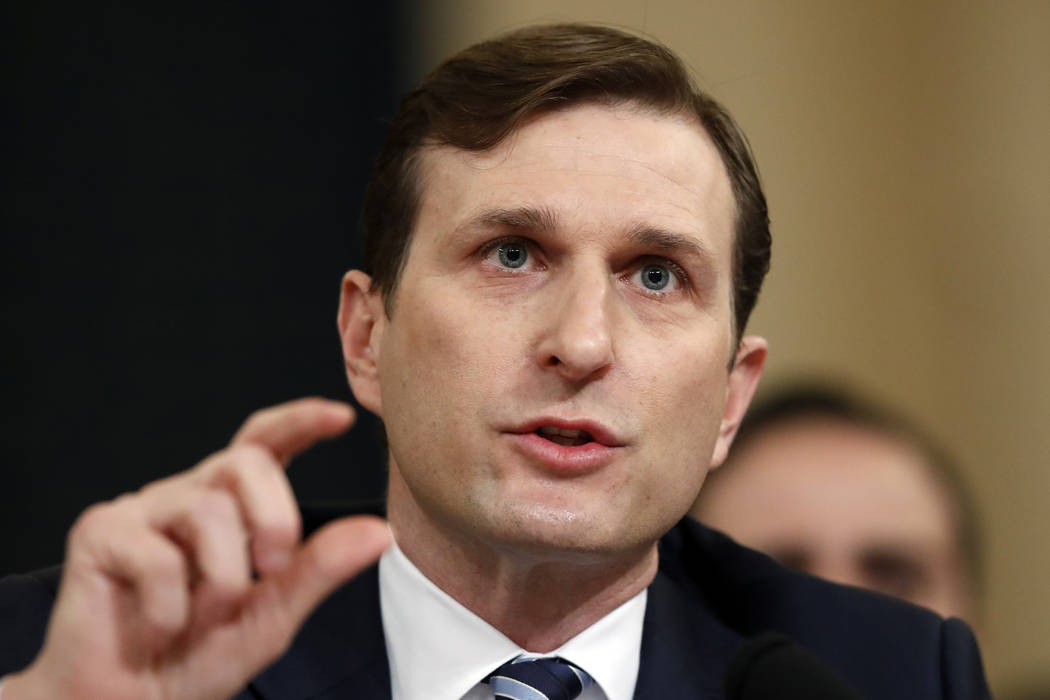 WASHINGTON — A partisan clash kicked off a week-long debate over impeachment Monday as Democrats and Republicans squared off over President Donald Trump’s request of Ukraine to investigate a political rival.

House Judiciary Committee Chairman Jerry Nadler, D-N.Y., said in his opening statement that the “integrity of our next election is at stake.” He said there was an urgency for the House to act following attempts by Trump to seek the help of other countries to win election three years ago and in his upcoming re-election bid.

“The president welcomed interference in our elections in 2016. He demanded it for 2020. Then he got caught,” said Nadler, who is directing the committee to draft articles of impeachment that could be introduced later this week.

“President Trump put himself before the country,” Nadler said.

Republicans balked at the speed of the proceedings and argued Democrats have failed to make their case that the president did anything that would rise to the level of impeachment.

“Where’s the impeachable offense?” asked Rep. Doug Collins, R-Ga., the ranking Republican on the committee. “Why are we here?”

“This is just how desperate they are — desperately focused on impeaching this president,” said Collins, who accused the Democrats of unleashing thousands of pages of documents his side had no time to review before Monday’s session. “This is a show. This is a farce. This is whatever you want to call it. The American people are having their tax dollars wasted on this impeachment of this president.”

As the hearing was underway, Trump tweeted his innocence. “Witch Hunt.”

Trump, through his White House counsel, has declined to participate in the public hearings. The president has urged the House to impeach him quickly so the case will move to the Republican-controlled Senate, where he predicted he would be acquitted.

In the hearing, Republicans accused Democrats of partisan motives in trying to nullify the 2016 election, which Trump won by defeating Democrat Hillary Clinton in the Electoral College, 306 to 232. (Clinton won the popular vote by nearly 3 million.)

Republicans repeatedly tried to halt or slow the proceedings, formally objecting several times that the committee’s Democratic counsel was impugning Trump as he spelled out potential charges. Nadler responded that negative comments about Trump might well be expected in listing reasons to impeach him. The Republicans still demanded votes on “taking down” the negative comments, defeated on party-line votes.

A protester with a conservative, pro-Trump group, InfoWars, disrupted the hearing when he stood and shouted: “Americans are sick of the impeachment scam.” The man was wrestled out the hearing room by Capitol Police.

The case for impeachment was laid out in a 300-page report released by the Intelligence Committee following testimony from career foreign service officials about a July 25 telephone call between Trump and Ukrainian President Volodymyr Zelenskiy.

In a public transcript of the call, Trump asked the Ukrainian president for “a favor” and sought an investigation into former Vice President Joe Biden and family, and a probe into a debunked theory that Ukraine, not Russia, meddled in the 2016 election.

The request was made while nearly $400 million in military aid for Ukraine was being withheld by the administration.

Daniel Goldman, Democratic counsel for the Intelligence Committee, said release of the aid was conditioned on the announcement by Zelenskiy of an investigation by Ukraine.

Democratic staff on the Judiciary Committee released a 52-page report that said the Framers of the Constitution believed soliciting the help of a foreign nation in an American election was grounds for impeachment.

“It’s wrong and it cannot happen with this president or any president,” said Barry Burke, the Judiciary Committee Democratic counsel.

“History, future generations will be the judge,” Burke said.

But Stephen Castor, the GOP counsel for the Intelligence and Judiciary committees, said Democrats have failed to make their case, which is based on flimsy evidence and presumption.

To impeach a president based on “eight lines in a call transcript,” Castor said, “is baloney.”

“The Democrats do not have the proof,” Castor said.

The Republican counsel also said Trump had legitimate concern about the dealings of Biden’s son, Hunter Biden, who was on the board of the Ukrainian gas company Burisma while the elder Biden served as vice president.

Witnesses told the Intelligence Committee that there was concern during the Obama administration that the involvement of the vice president’s son could pose an appearance of a conflict of interest.

But Goldman denounced a claim by Trump and loyalists that there was any evidence of wrongdoing on the part of the former vice president. Those allegations, Goldman said “are patently false.”

The dramatic day of testimony was peppered with partisan squabbles as lawmakers on both sides of the aisle jockeyed to cast the investigation in a political light to serve their parties.

House Minority Leader Kevin McCarthy, R-Calif., led the GOP call to shift the spotlight to Intelligence Chairman Adam Schiff, D-Calif., and his contacts with a whistleblower who first alerted the intelligence services inspector general about the president’s phone call with Zelenskiy.

“Where’s Adam Schiff?” McCarthy asked. “He should be the one testifying under oath. Where is he hiding.”

Burke told the committee that Republicans could not defend the president’s action, and they have instead introduced “extraneous matters intended to distract.”

Once a whistleblower went to counsel about the president’s request, the White House publicly released a transcript of the phone call. Democrats insisted Trump and the White House tried to cover up and obstruct Congress in its investigation.

Goldman said there were 12 witnesses with knowledge of the call or the Ukrainian aid who were subpoenaed by the Judiciary Committee, but who declined to testify on the advice of the White House.

The Judiciary Committee is expected to debate the allegations against Trump this week as it drafts articles of impeachment, which could be voted on by the panel by the end of the week.

A full House vote is expected before the Christmas recess.

Lawmakers in both parties have dug in during the proceedings, with a House vote on impeachment articles expected to fall along party lines and approved by the Democrat-controlled House.

If approved, impeachment would move to a trial in the GOP-led Senate, where it would take a two-thirds majority vote, or 67 senators, to remove the president from office. Republicans currently hold 53 of the 100 seats in the upper house.

The Nevada congressional delegation is split along party lines on impeachment proceedings. Only Rep. Dina Titus, D-Nev., who as a member of the House Foreign Affairs Committee heard testimony in the impeachment case, has come out publicly about how she intends to vote.

Titus said the evidence is clear the president sought foreign interference for help with re-election. She also praised partly leaders for holding public hearings to lay out the case for the public and the Senate, which holds the final say in the impeachment process.