RJ App
Vegas News, Alerts, ePaper
OPEN
Former security officials blamed faulty intelligence for the disastrous failure to anticipate the violent intentions of the mob that invaded the building and interrupted the certification of the presidential election. (STN)
By Mary Clare Jalonick The Associated Press
February 23, 2021 - 7:41 am 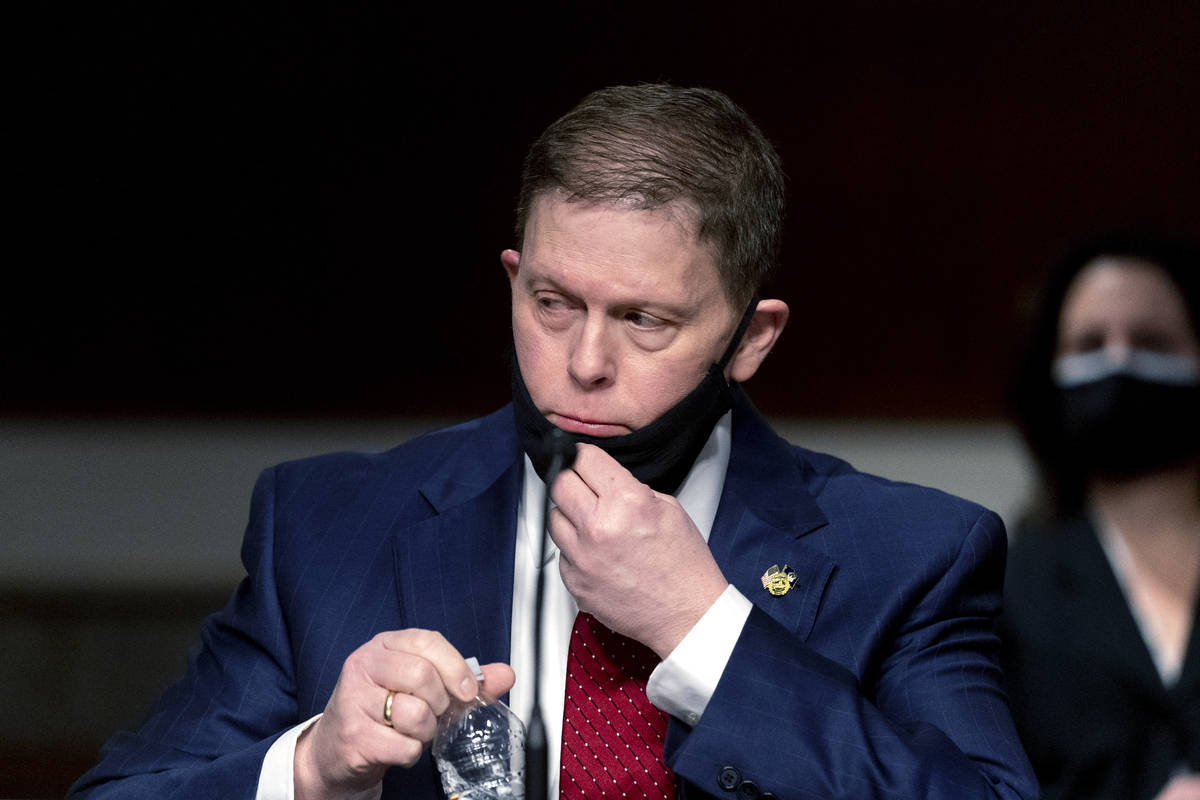 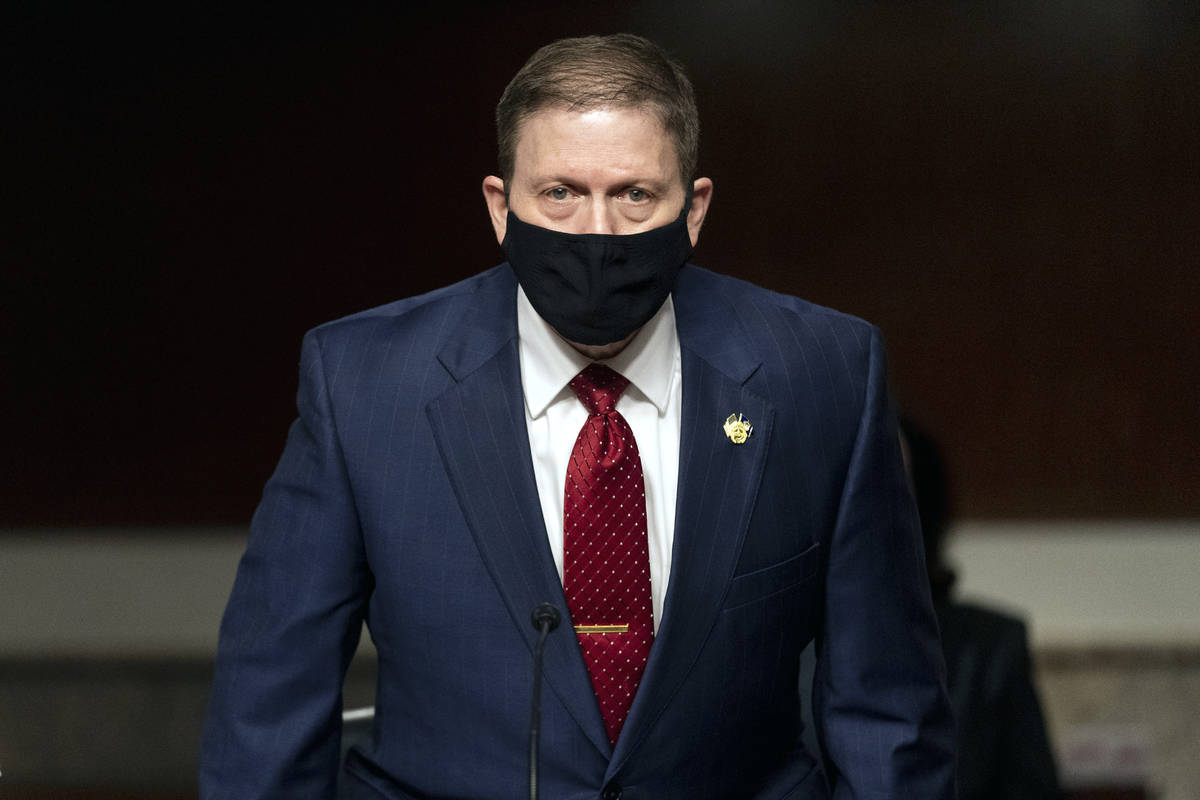 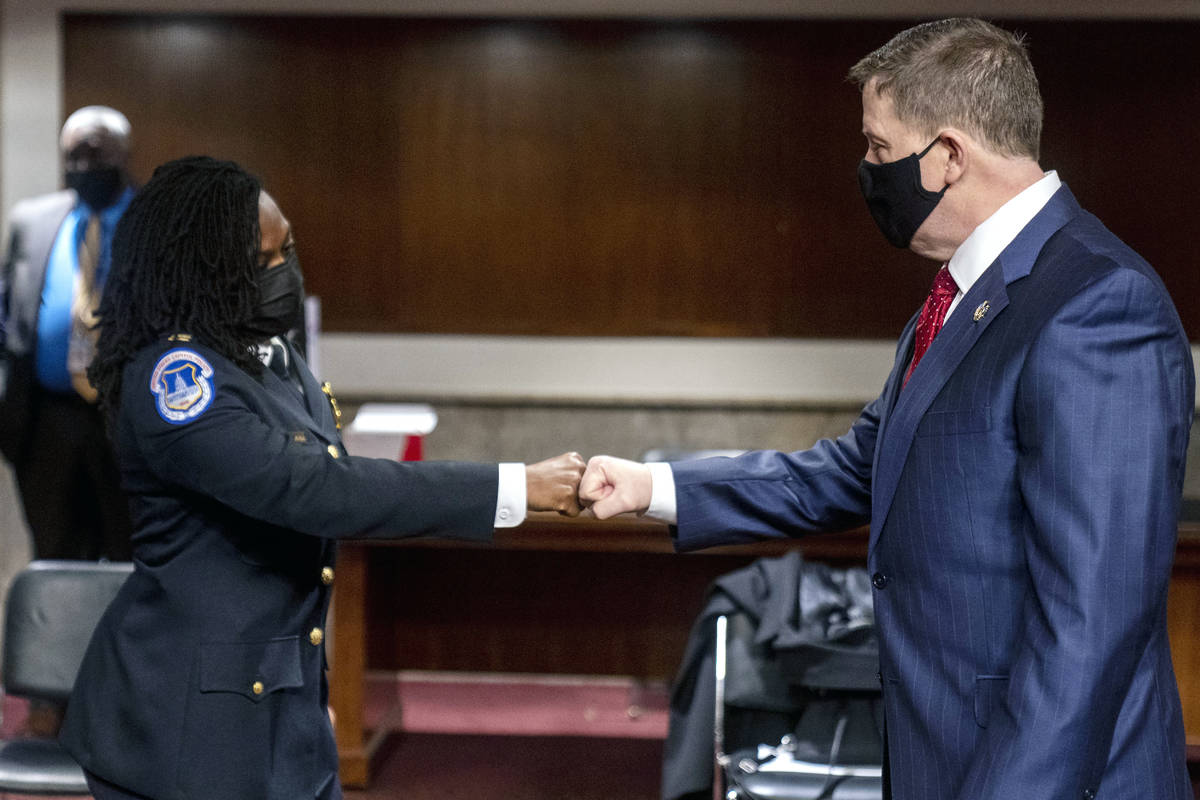 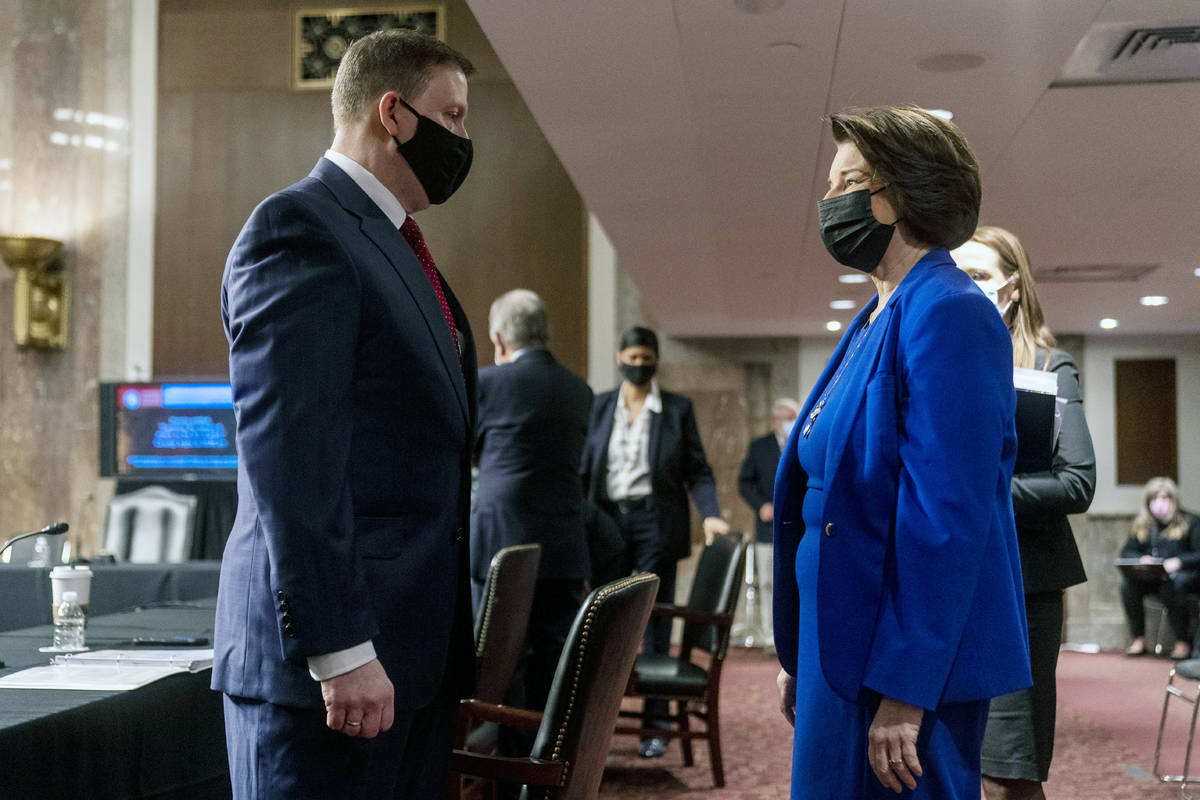 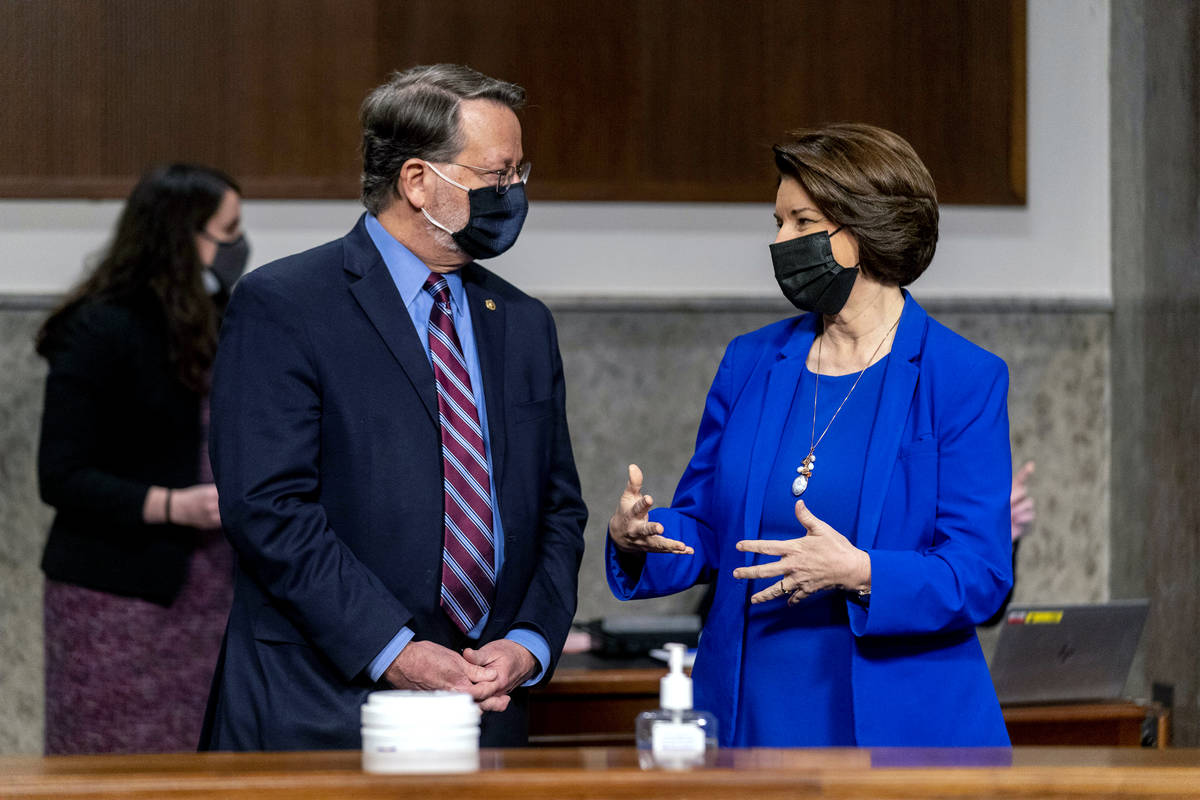 WASHINGTON — Testifying for the first time about the insurrection at the U.S. Capitol, former security officials blamed faulty intelligence for the disastrous failure to anticipate the violent intentions of the mob that invaded the building and interrupted the certification of the presidential election.

The officials, including the former chief of the Capitol Police, are blaming other federal agencies — and each other — for their failure to defend the building as supporters of then-President Donald Trump overwhelmed security barriers, breaking windows and doors and sending lawmakers fleeing from the House and Senate chambers. They say they expected the protests to be similar to two pro-Trump events in late 2020 that were far less violent.

Former Capitol Police Chief Steven Sund described a scene that was “like nothing” he had seen in his 30 years of policing.

“When the group arrived at the perimeter, they did not act like any group of protesters I had ever seen,” the ousted chief said, arguing that the insurrection was not the result of poor planning but of failures across the board from many agencies and officials.

“No single civilian law enforcement agency – and certainly not the USCP – is trained and equipped to repel, without significant military or other law enforcement assistance, an insurrection of thousands of armed, violent, and coordinated individuals focused on breaching a building at all costs,” Sund said.

The joint hearing, part of an investigation of Jan. 6 by the Senate Homeland Security and Governmental Affairs Committee and the Senate Rules Committee, is the first time the officials have testified publicly about the events of that day. In addition to Sund, former Senate Sergeant-at-Arms Michael Stenger, former House Sergeant-at-Arms Paul Irving and Robert Contee, the acting chief of police for the Metropolitan Police Department, are testifying.

Sund, Irving and Stenger resigned under pressure immediately after the deadly attack.

“We must have the facts, and the answers are in this room,” Senate Rules Committee Chairwoman Amy Klobuchar said at the beginning of the hearing.

Much remains unknown about what happened before and during the assault. How much did law enforcement agencies know about plans for violence that day, many of which were public? How did the agencies share that information with each other? And how could the Capitol Police have been so ill-prepared for a violent insurrection that was organized online?

Sund told the lawmakers that he learned only after the attack that his officers had received a report from the FBI’s field office in Norfolk, Virginia, that forecast, in detail, the chances that extremists could commit “war” in Washington the following day. The head of the FBI’s office in Washington has said that once he received the Jan. 5 warning, the information was quickly shared with other law enforcement agencies through the joint terrorism task force.

Sund said Tuesday that an officer on the task force had received that memo and forwarded it to a sergeant working on intelligence for the Capitol Police but that the information was not put forward to any other supervisors. Sund said he wasn’t aware of it.

Senate Homeland Chairman Gary Peters, D-Mich., said the failure of the intelligence report to reach the chief was clearly a major problem. “How could you not get that vital intelligence?” he asked.

“That information would have been helpful,” Sund replied.

The officials have also disagreed on when the National Guard was called and on requests for the guard beforehand. Sund said he spoke to both Stenger and Irving about requesting the National Guard in the days before the riot, and that Irving said he was concerned about the “optics” of having them present.

Irving denied that, saying Sund’s account is “categorically false.” Safety, not optics, determined their security posture, he said, and the top question was whether intelligence supported the decision.

“We all agreed the intelligence did not support the troops and collectively decided to let it go,” Stenger said. He added that they were satisfied at the time that there was a “robust” plan to protect Congress.

After smashing through the barriers at the perimeter, the invaders engaged in hand-to-hand combat with police officers, injuring dozens of them, and broke through multiple windows and doors, sending lawmakers fleeing from the House and Senate chambers and interrupting the certification of the 2020 presidential election. Five people died as a result of the violence, including a Capitol Police officer and a woman who was shot by police as she tried to break through the doors of the House chamber with lawmakers still inside.

The hearing is the first of many examinations of what happened that day, coming almost seven weeks after the attack and over one week after the Senate voted to acquit former President Donald Trump of inciting the insurrection by telling his supporters to “fight like hell” to overturn his election defeat. Thousands of National Guard troops still surround the Capitol in a wide perimeter, cutting off streets and sidewalks that are normally full of cars, pedestrians and tourists.

Congress is also considering a bipartisan, independent commission to review the missteps, and multiple congressional committees have said they will look at different aspects of the siege. Federal law enforcement have arrested more than 230 people who were accused of being involved in the attack, and President Joe Biden’s nominee for attorney general, Judge Merrick Garland, said in his confirmation hearing Monday that investigating the riots would be a top priority.

Senators are especially focused on the timing of the deployment of the National Guard, which eventually arrived to help the overwhelmed police, how security agencies shared information ahead of the attack and if the command structure of the Capitol Police Board, which includes the House and Senate sergeants-at-arms, contributed to the failures.

Tuesday’s hearing is the first of at least two public examinations of what went wrong that day as the Senate panels undertake a joint investigation into the security failures. A second hearing, expected to be held in the next few weeks, will examine the response of the Defense Department, the Department of Homeland Security and the FBI.

Six Arizona counties must decide Monday whether to certify 2022 election results amid pressure from some Republicans not to officially approve a vote count.