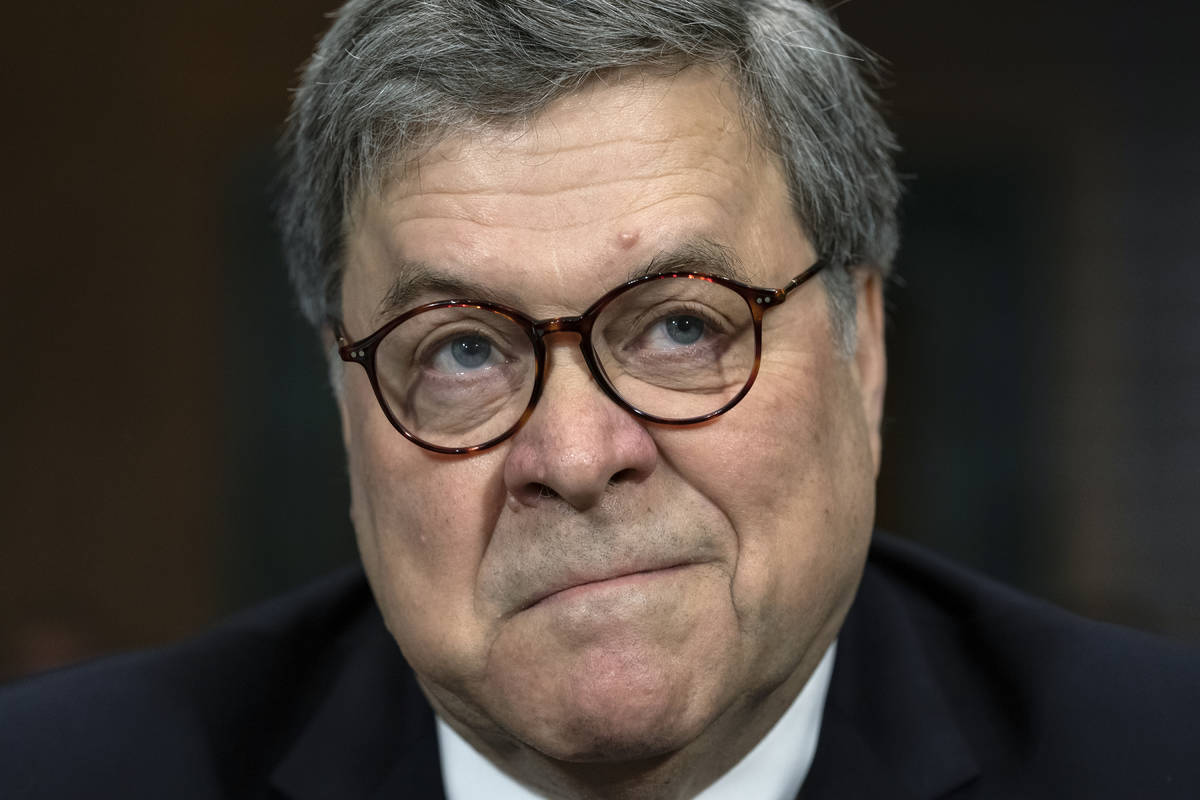 In this May 1, 2019, file photo, then Attorney General William Barr appears before the Senate Judiciary Committee to face lawmakers' questions for the first time since releasing special counsel Robert Mueller's Russia report, on Capitol Hill in Washington. Senate Democratic leaders are demanding that former Attorneys General Bill Barr and Jeff Sessions testify about the secret seizure of data from House Democrats in 2018. (AP Photo/J. Scott Applewhite) 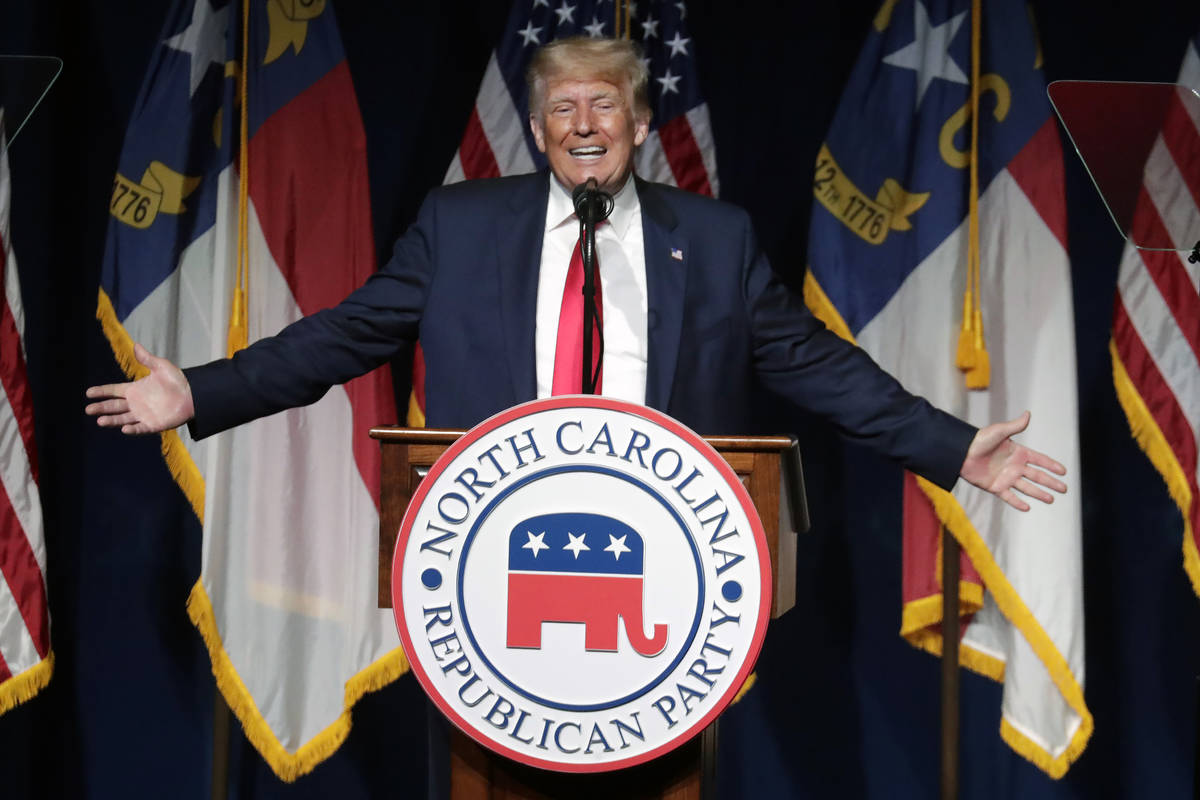 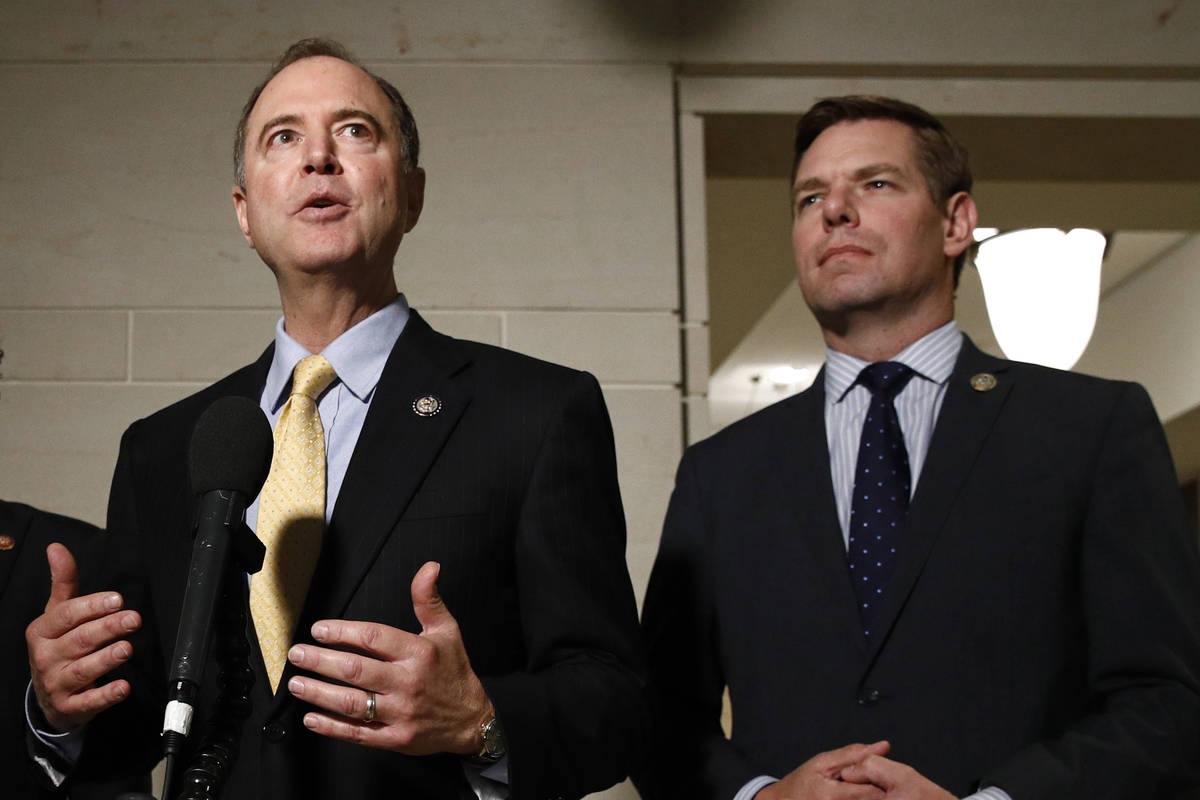 FILE - In this May 28, 2019 file photo, Rep. Adam Schiff, D-Calif., left, and Rep. Eric Swalwell, D-Calif., speak with members of the media on Capitol Hill in Washington. The Justice Department under former President Donald Trump secretly seized data from the accounts of at least two Democratic lawmakers in 2018 as part of an aggressive crackdown on leaks related to the Russia investigation and other national security matters, according to three people familiar with the seizures. (AP Photo/Patrick Semansky) 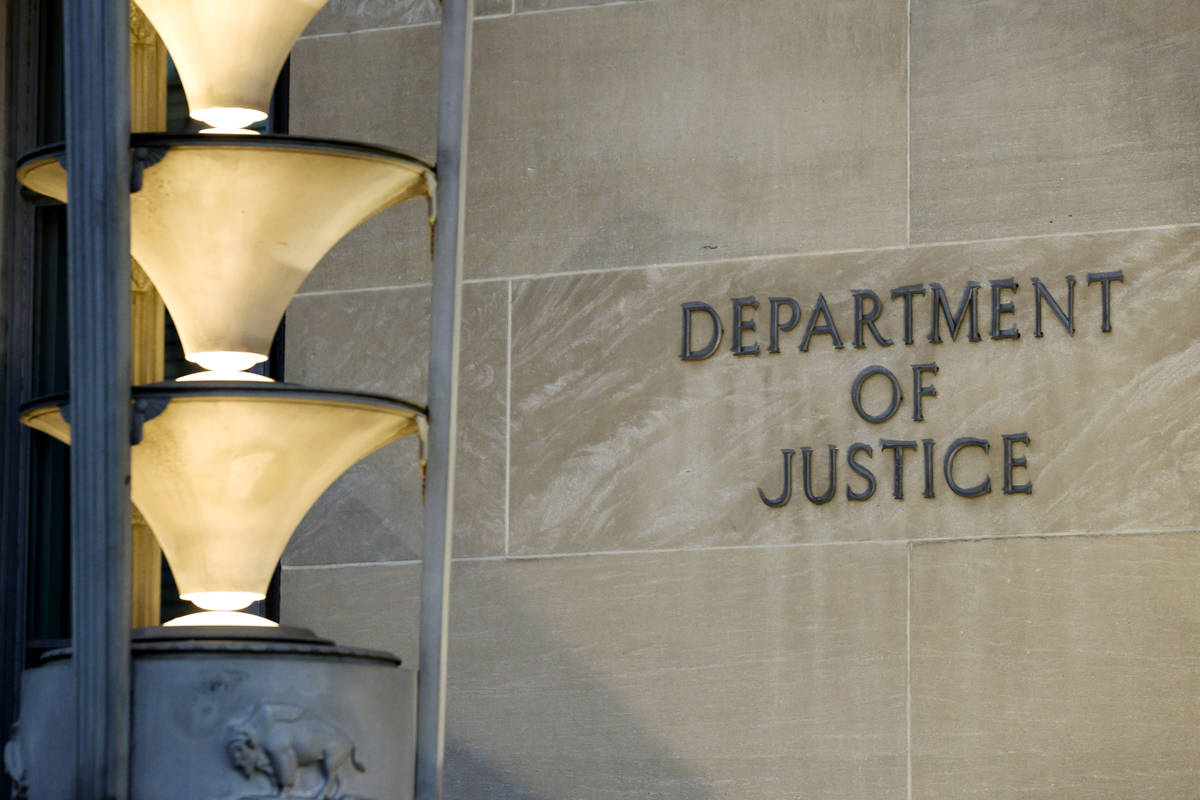 The Department of Justice is seen, Friday, March 22, 2019, in Washington. The Justice Department under former President Donald Trump secretly seized data from the accounts of at least two Democratic lawmakers in 2018 as part of an aggressive crackdown on leaks related to the Russia investigation and other national security matters, according to three people familiar with the seizures. (AP Photo/Alex Brandon) 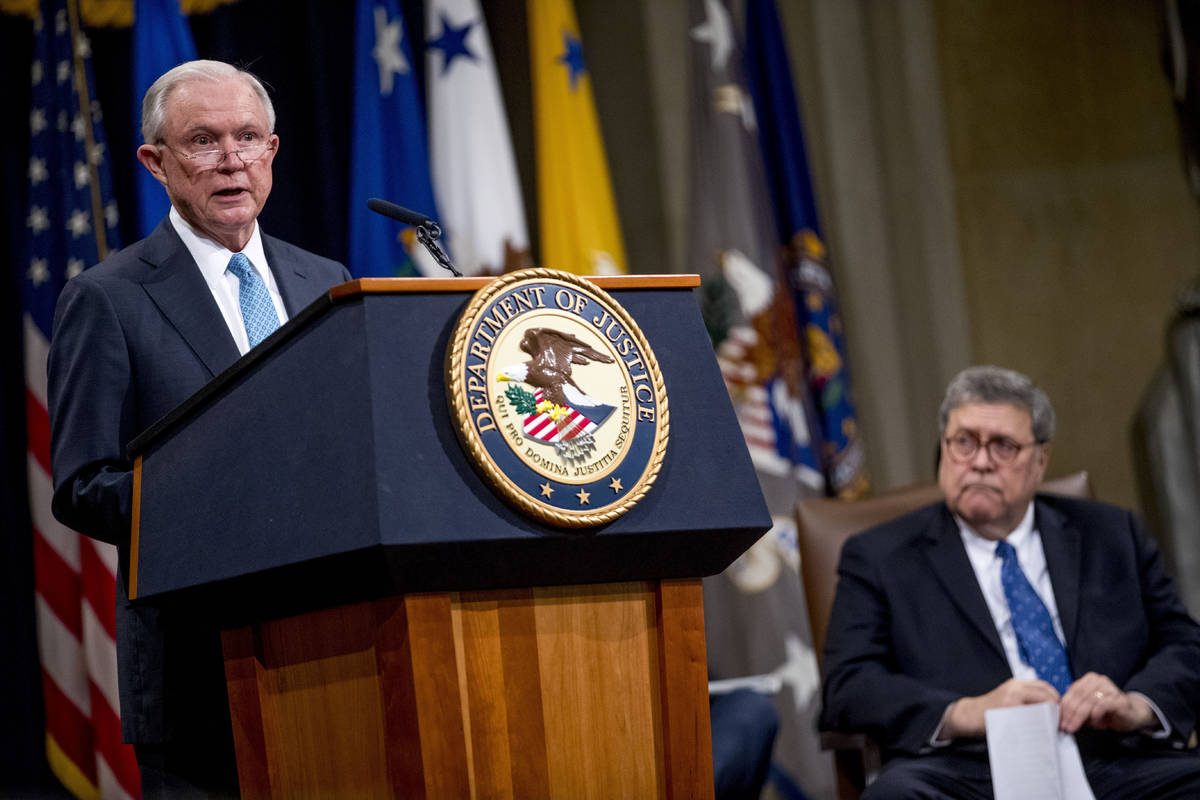 WASHINGTON — Former President Donald Trump has made no secret of his long list of political enemies. It just wasn’t clear until now how far he would go to try to punish them.

It was a stunning revelation that one branch of government was using its power to gather private information on another, a move that carried echoes of President Richard Nixon during Watergate.

On Friday, the Justice Department’s internal watchdog announced that it was investigating the records seizure. And Democratic leaders in Congress are demanding that former top Justice officials testify before a Senate committee to explain why the iPhone records of Reps. Adam Schiff and Eric Swalwell, both Democrats, and their family members were secretly subpoenaed in 2018. The records of at least 12 people were eventually shared by Apple.

The dispute showed that the rancorous partisan fights that coursed through the Trump presidency continue to play out in new and potentially damaging ways even as the Biden administration has worked to put those turbulent four years in the past.

“Attorneys general’s only loyalty should be to the rule of law — never to politics,” he said.

The disclosure that the records had been seized raised a number of troubling questions. Who else may have been targeted? What was the legal justification to target members of Congress? Why did Apple, a company that prides itself on user privacy, hand over the records? And what end was the Trump Justice Department pursuing?

The revelations also are forcing the Biden Justice Department and Attorney General Merrick Garland to wade back into a fight with their predecessors.

“The question here is just how did Trump use his political power to go after his enemies — how did he use the government for his political benefit,” said Kathleen Clark, legal ethics scholar at Washington University in St. Louis.

The effort to obtain the data came as Trump was publicly and privately fuming over investigations by Congress and then-special counsel Robert Mueller into his 2016 campaign’s ties to Russia.

Trump inveighed against leaks throughout his time in office, accusing a “deep state” of working to undermine him by sharing unflattering information. He repeatedly called on his Justice Department and attorneys general to “go after the leakers,” including singling out former FBI Director James Comey and Schiff, now chairman of the House Intelligence Committee.

In May of 2018, he tweeted that reports of leaks in his White House were exaggerated, but said that nonetheless, “leakers are traitors and cowards, and we will find out who they are!”

Schiff and Swalwell were two of the most visible Democrats on the House Intelligence Committee, then led by Republicans, during the Russia inquiry. Both California lawmakers made frequent appearances on cable news shows. Trump watched those channels closely and seethed over the coverage.

There’s no indication that the Justice Department used the records to prosecute anyone. After some of the leaked information was declassified and made public during the later years of the Trump administration, there was concern among some of the prosecutors that even if they could bring a leak case, trying it would be difficult and a conviction would be unlikely, one person told The Associated Press. That person, a committee official and a third person with knowledge of the data seizures were granted anonymity to discuss them.

Federal agents questioned at least one former committee staff member in 2020, the person said, and ultimately, prosecutors weren’t able to substantiate a case.

For decades, the Justice Department had worked to maintain strict barriers with the White House to avoid being used as a political tool to address a president’s personal grievance.

For some, the Trump administration’s effort is more disturbing than Nixon’s actions during Watergate that forced his resignation. Nixon’s were done in secret out of the White House, while the Trump administration moves to take the congressmen’s records were approved by top Justice Department officials and worked on by prosecutors, who obtained secret subpoenas from a federal judge and then gag orders to keep them quiet.

“The fate of Richard Nixon had a restraining effect on political corruption in America,” said Timothy Naftali, a Nixon scholar and former director of the Richard Nixon Presidential Library and Museum. “It didn’t last forever, but the Republican Party wanted to cleanse itself of Nixon’s bad apples and bad actors.”

The Republican Party is far too aligned with Trump to do that now, but it doesn’t mean Biden should let it go, Naftali said.

“The reason to do this is not revenge,” Naftali said. “It’s to send a signal to future American lawyers they will be held accountable.”

While the Justice Department routinely conducts investigations of leaked information, including classified intelligence, opening such an investigation into members of Congress is extraordinarily rare.

Efforts to get reporters’ phone records

A less rare but still uncommon tool is to secretly seize reporters’ phone records, something the Trump Justice Department also did. Following an outcry from press freedom organizations, Garland announced last week that it would cease the practice of going after journalists’ sourcing information.

The subpoenas were issued in 2018, when Jeff Sessions was attorney general, though he had recused himself in the Russia investigation, putting his deputy, Rod Rosenstein, in charge of Russia-related matters. The investigation later picked up momentum again under Attorney General William Barr.

Apple informed the committee last month that the records had been shared and that the investigation had been closed, but did not give extensive detail. Also seized were the records of aides, former aides and family members, one of them a minor, according to the committee official.

The Justice Department obtained metadata — probably records of calls, texts and locations — but not other content from the devices, like photos, messages or emails, according to one of the people. Another said that Apple complied with the subpoena, providing the information to the Justice Department, and did not immediately notify the members of Congress or the committee about the disclosure.

And the people whose records were seized were unable to challenge the Justice Department because the subpoenas went to Apple directly. The gag order was renewed three times before it lapsed and the company informed its customers May 5 what had happened.

Apple said in a statement that it couldn’t even challenge the warrants because it had so little information available and “it would have been virtually impossible for Apple to understand the intent of the desired information without digging through users’ accounts.”

Patrick Toomey, an attorney with the American Civil Liberties Union, said the seizure of congressional records was part of a series of Trump-era investigations that “raise profound civil liberties concerns and involve spying powers that have no place in our democracy.”

6 key takeaways from Biden’s State of the Union