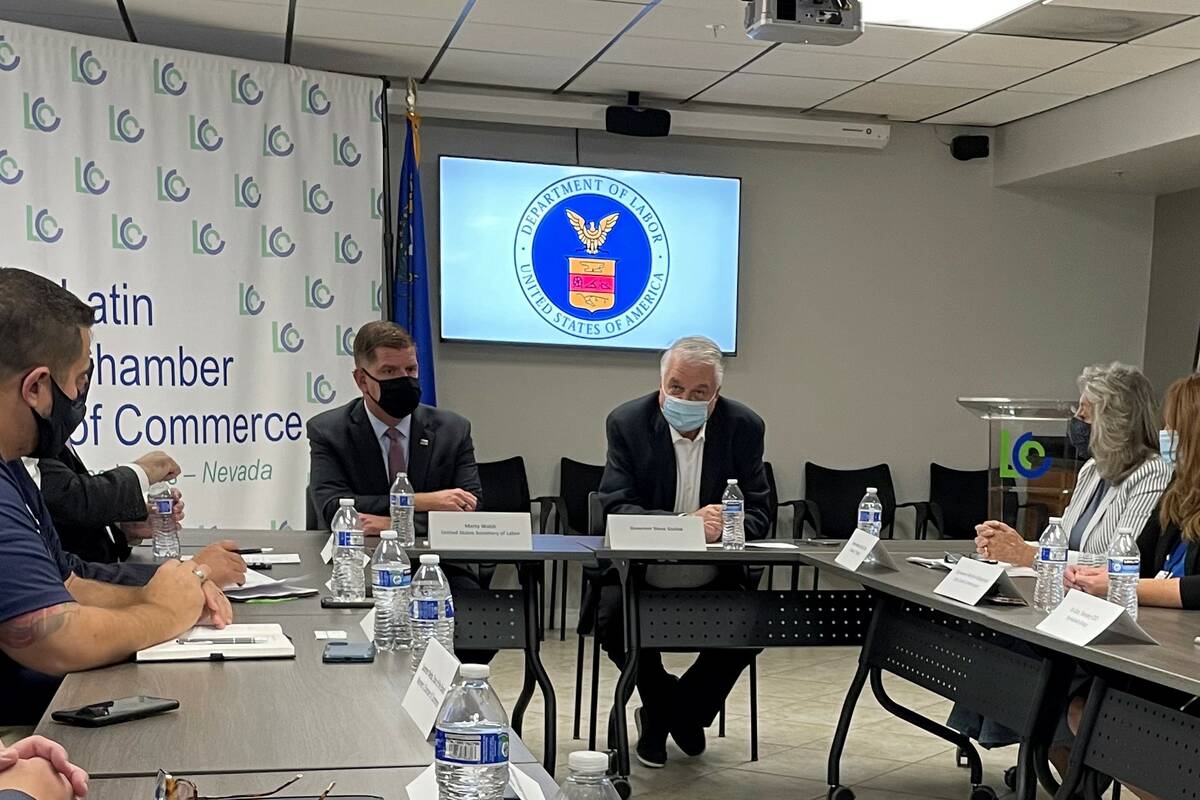 Secretary of Labor Marty Walsh and Gov. Steve Sisolak, center, speak to local politicians and business stakeholders about workforce development at a roundtable discussion on Monday, Sept. 13, 2021, at the Latin Chamber of Commerce in Las Vegas. (McKenna Ross/Las Vegas-Review Journal)

Workforce development in Nevada is hitting a snag as the skilled labor pipeline faces challenges, business leaders told local and national politicians during a Monday roundtable visit at the Latin Chamber of Commerce.

Walsh, in his third visit to Las Vegas since joining the Labor Department and the Biden administration, said leaders must be intentional about using the flux of federal stimulus and infrastructure funds, as well as potential trillions of additional dollars if a “human infrastructure” passes through Congress.

“We really have to be intentional about the investments we make to move forward,” Walsh said. “We’re looking at some of the ways that we invest in job training. I use the word invest because it is an investment in people. … Spending might be buying things. Investment, what we’re doing here in Build Back Better, is we’re investing in people. We’re investing in the American economy.”

Stakeholders said the challenge in workforce development is in recruiting and training for different skilled work. Chris Vito, president of Nevada Adult Day Healthcare Centers, said that he’s noticed an inconsistency in training and that he thinks training could keep employees on the same career paths.

“The actual provision of knowledge and training actually reenergizes the employee and motivates them to carry the torch,” Vito said.

Still others pointed out that fixing the pipeline could be addressed as early as middle school and high school. Business leaders said for years, teens expected that good jobs required an expensive college degree. Now many aren’t aware of the high-paying jobs available through the trades, with associates degrees or other less costly certificates.

“We have not done a good enough job explaining how good these jobs are. I’ve gone into high schools where you say, ‘Why don’t you look at the welder?’ and they say, ‘Well, I don’t want to make 12 bucks an hour.’ Are you kidding me?” Sisolak said, pointing out how some high-paying jobs may not be perceived that way.

For some groups, that’s led to creative searches for talent.

Jo Cato, owner of the marketing and public relations consultancy firm Periwinkle Group, said they previously would hire college-educated people. But the pandemic has led them to seek talent from trade schools and apprenticeships to show that consultancy doesn’t require a college degree.

“The challenges we’re having right now is our pipeline is dry,” Cato said.