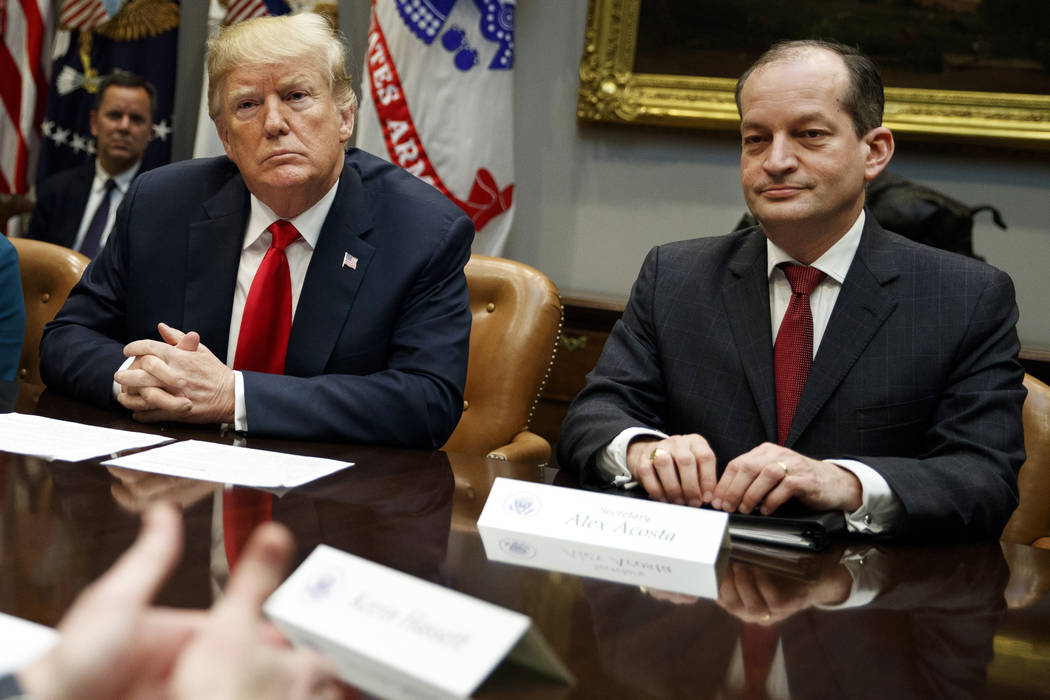 President Donald Trump, left, and Labor Secretary Alexander Acosta listen during a meeting of the President's National Council of the American Worker in the Roosevelt Room of the White House in Washington, Sept. 17, 2018. (Evan Vucci/AP, File) 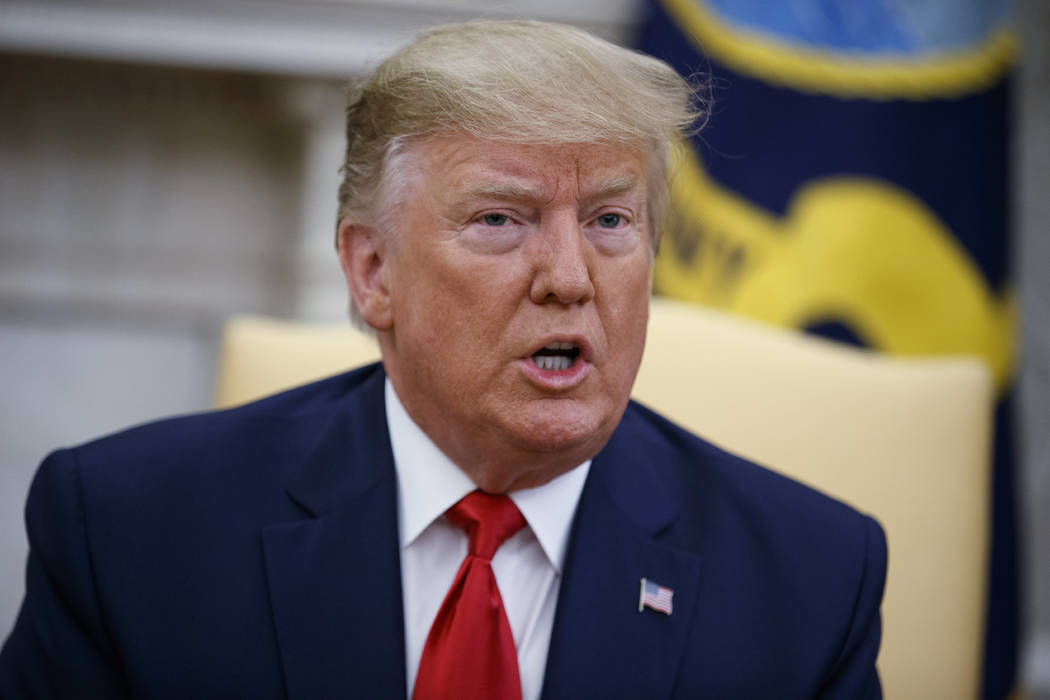 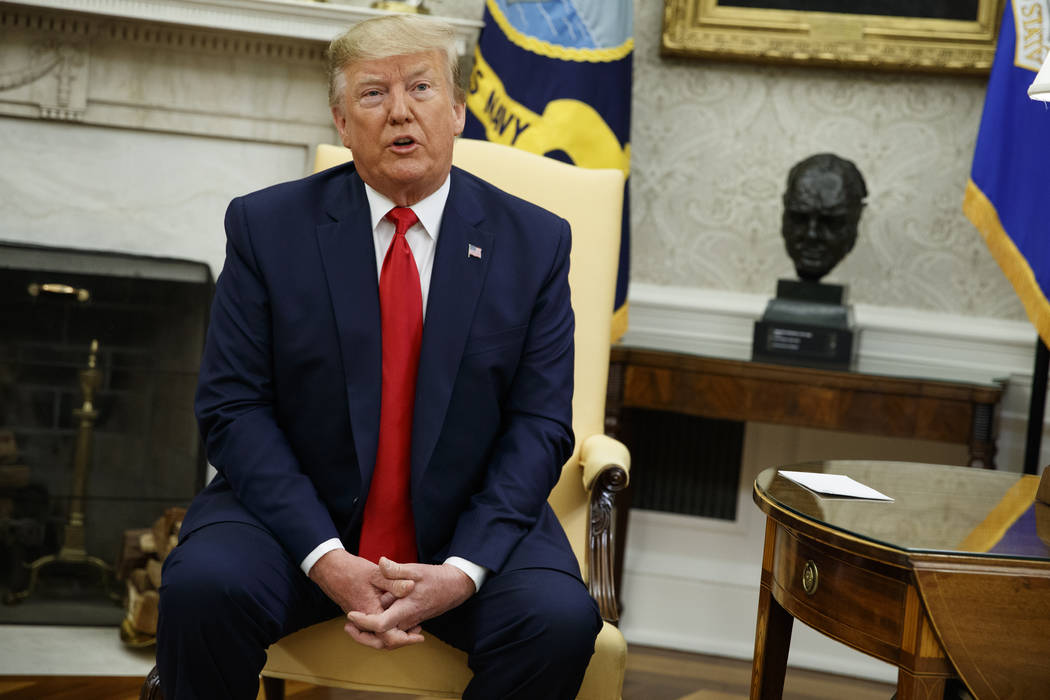 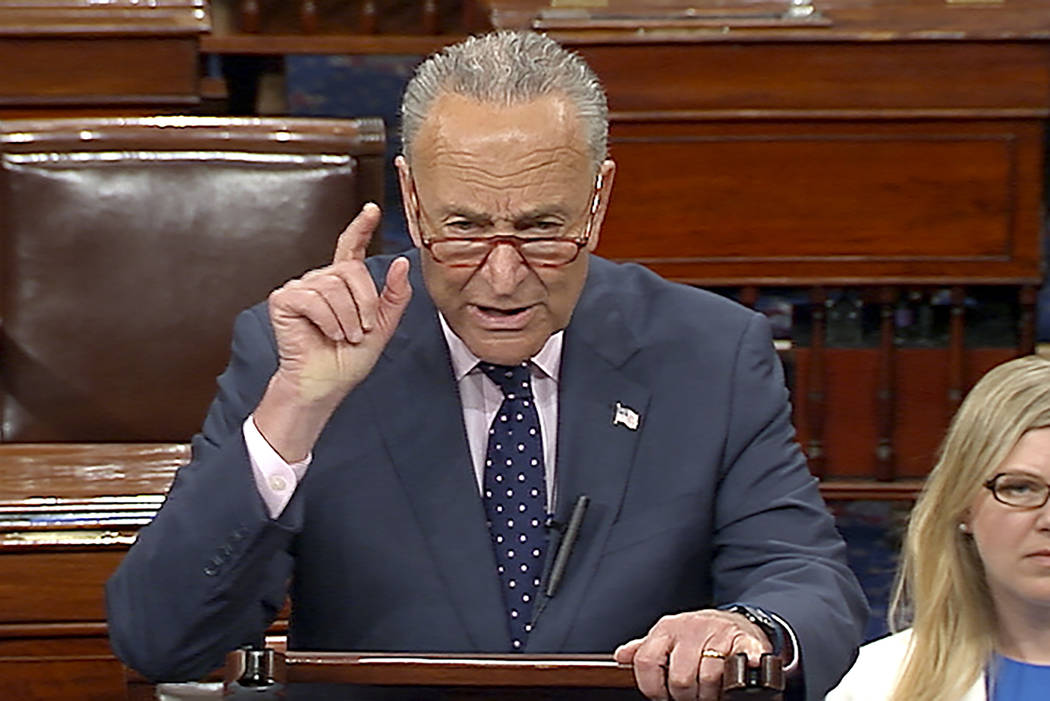 In this image from Senate Television, Senate Minority Leader Chuck Schumer, D-N.Y., talks on the Senate floor, Tuesday, June 9, 2019, on Capitol Hill in Washington. Schumer and a growing collection of congressional Democrats say President Donald Trump's labor secretary should quit. Alexander Acosta was a federal prosecutor in 2008 when he was involved in a plea deal that let billionaire financier Jeffrey Epstein escape prison time for alleged sex crimes. (Senate Television via AP)

The calls for Acosta’s political scalp began Monday after Manhattan U.S. Attorney Geoffrey Berman charged billionaire financier Jeffrey Epstein with two counts of sex trafficking with underage girls between 2002 and 2005. If Epstein, who has pleaded not guilty, is convicted, he could serve 45 years in prison — a lifetime compared to the scant 13 months Epstein served under a 2008 deal negotiated by Acosta, who was then the U.S. attorney for the Southern District of Florida.

Sitting in the Oval Office with Qatar Emir Tamin bin Hamad al-Thani Tuesday, Trump also spoke of his falling out with Epstein when the two moved in the same high-end social circles of Manhattan and Palm Beach. “I don’t think I’ve spoken to him for 15 years,” Trump told reporters, “I wasn’t a fan.”

According to news reports dating to 2007, Trump’s Palm Beach resort Mar-a-Lago barred Epstein from the premises because of his unseemly pursuit of young females.

Trump’s Tuesday remarks about a freeze with Epstein stand in contrast to a 2002 quote Trump gave New York magazine. In that piece, Trump said of Epstein, “I’ve known Jeff for 15 years. Terrific guy. He’s a lot of fun to be with. It is even said that he likes beautiful women as much as I do, and many of them are on the younger side.”

Also Tuesday, Acosta issued a public statement about the case, praising Berman for charging Epstein “based on new evidence.” Acosta also defended the relatively light sentence meted out to Epstein in 2008 as a deal reached with less available evidence, which nonetheless put a billionaire in jail, required him to “register as a sex offender and put the world on notice that he was a sexual predator.”

Asked if he maintained confidence in his Labor secretary, Trump said Acosta had done an “excellent” job and that many people would do things differently if they had a chance to remake decisions made 12, 15 or 20 years earlier. Trump also said his administration would look at the incident “very carefully.”

Senate Minority Leader Chuck Schumer, however, faulted Acosta for failing to produce a longer sentence and hiding the non-prosecution agreement from Epstein’s victims. In remarks on the Senate floor Tuesday, Schumer called on Acosta to resign, and on Trump to fire Acosta if he does not.

House Speaker Nancy Pelosi had called for Acosta to step down Monday.

.@SecretaryAcosta must step down. As US Attorney, he engaged in an unconscionable agreement w/ Jeffrey Epstein kept secret from courageous, young victims preventing them from seeking justice. This was known by @POTUS when he appointed him to the cabinet. #AcostaResign

Rep. Dina Titus, D-Nev., also called for Acosta’s resignation. “Labor Secretary Alex Acosta failed miserably to deliver justice for the underage girls that Jeffrey Epstein abused and exploited,” Titus said in a statement. “The Department of Labor is responsible for handling sexual harassment cases and it should never have been overseen by someone who allowed a serial sexual predator to live a life of luxury.”

And Sen. Catherine Cortez Masto, D-Nev., also joined the call, saying in a statement “as Secretary of Labor, Alexander Acosta is responsible for enforcing child labor laws and protecting against human trafficking. I’ve reviewed the recent indictment against Mr. Epstein and the reporting by the Miami Herald on Secretary Acosta’s role as U.S. attorney in arranging his plea agreement. Secretary Acosta showed a blatant disregard for the child victims of Mr. Epstein. As a former attorney general of Nevada who has fought against the sexual exploitation of women and children, it’s clear to me that Secretary Acosta must resign.”