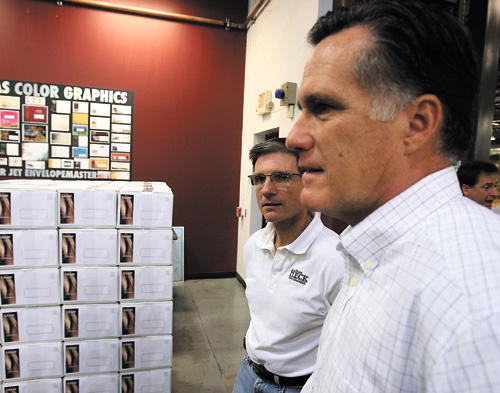 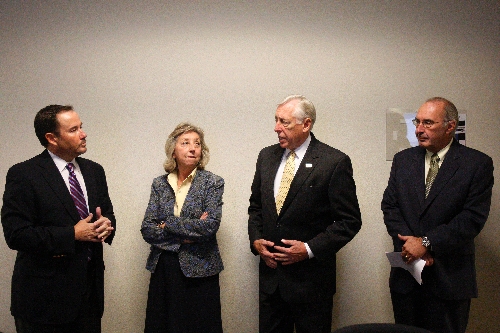 Does Republican Sharron Angle have the momentum in the U.S. Senate race?

Is there "panic" in the camp of Democratic incumbent U.S. Sen. Harry Reid?

And what does Sharia, or Islamic law, have to do with the U.S. Senate race in Nevada anyway?

With the start of early voting this Saturday, it might be time to pay closer attention to the nation’s hottest, nastiest and closest Senate contest, if polls are any guide.

Which brings us to the question of whether voter surveys can be trusted.

The latest poll for the Las Vegas Review-Journal, taken Sept. 20-24, had Angle and Reid tied, 43-43. It was conducted by Mason-Dixon Polling & Research, which uses random-digit dialing to call voters. Previous Mason-Dixon surveys showed the race within a point or two, with Reid up over Angle.

Using similar polling methods, a string of surveys this past week gave Angle the edge, however. One put her at the 50 percent mark for the first time.

An auto-dial Rasmussen poll showed Angle edging Reid, 50-46, just within the margin of error of plus or minus four percentage points. CNN/Time had Angle up, 42-40, and Fox News 49-46.

"The race is still a toss-up, but it is looking increasingly grim for the majority leader," concluded Real Clear Politics, which had Angle pulling ahead for the first time in poll watch.

The GOP sent out a notice saying Reid and his pollster planned a Friday "panic call with supporters" to calm nerves. The call was canceled, with Reid citing a scheduling conflict and his campaign dismissing attention to what they said was a routine call.

"We have Senator Reid consistently ahead," Mellman said of the daily polling but without revealing the point spread. "But this is a tough, hard battle and it’s far from over."

The Reid campaign places higher confidence in its polls because it surveys cell phone users — not just voters with land lines — and it calls people multiple times over several days to catch them. As a result, his polls capture a broader array of the electorate, including more young, highly educated busy people and more minorities, or voters who in theory are more inclined to back Reid.

All right, Vegas, so what do oddsmakers say about the Senate race surveys?

New York Times polling expert Nate Silver issued a caution about the methodology used by Rasmussen and Fox but suggested Angle may well have momentum — for now.

"Nevada had long been in a stalemate, and even if these reeds of evidence are thin, they are enough for the forecasting model to make Ms. Angle a 66 percent favorite, up from 56 percent last week," Silver wrote on Friday.

Looking to take Angle down before Nov. 2, the Reid campaign turned up the volume by highlighting both the Tea Party favorite’s own controversial comments and those of people around her.

The Reid campaign called it Angle’s "exploding pastor scandal" after the Rev. John Reed, of Sonrise Church in Reno, went on an anti-Mormon rant.

The Angle campaign disavowed Reed’s remarks. A Southern Baptist, Angle noted she left his church several years ago for the Fellowship Community Church in Reno, although Reed said she was at some of his services in recent months.

"As a Christian, Sharron shares the same values with other active Christians, including those of the Latter-day Saints community," said Angle’s Agen.

The Reid campaign’s attempts to promote the pastor’s remarks echo the 2008 presidential campaign, when Barack Obama was forced to distance himself from controversial pronouncements by his Chicago pastor, the Rev. Jeremiah Wright.

Mormons, who make up 8 to 10 percent of Nevada’s population, could be one of the deciding factors in the race. In recent years, conservative Republican Mormons turned away from Reid after he became Democratic leader of the Senate and backed a more liberal agenda.

But the pastor’s remarks could push wavering Mormons back toward him.

"I tried to stay out of the race, but I’m in it now," said Jay Bingham, a Reid friend, former Clark County commissioner and past LDS stake president in Las Vegas. He demurred when asked whether he had ever voted against Reid.

"I don’t always support him because I don’t agree with a lot of his votes, but that’s wrong for a preacher to talk like that," Bingham said. "I’ve heard good things about Sharron Angle, but I don’t think we can give her a pass on this. I did not give Barack Obama a pass."

The Sharia story is more complicated, but the Reid campaign promotes it as more support for its theme that Angle is "too extreme" for Nevada.

A couple of weeks ago, the Mesquite Local News reported on a rally Angle attended. Her remarks didn’t get much play until the paper shared the recording with several news outlets.

"I keep hearing about Muslims wanting to take over the United States. … They are taking over a city in Michigan, and the residents of the city, they want them out. They want them out. So, I want to hear your thoughts about that," a man is heard asking Angle on a recording obtained by The Associated Press.

"We’re talking about a militant terrorist situation, which I believe isn’t a widespread thing, but it is enough that we need to address, and we have been addressing it," Angle responds.

"My thoughts are these," she adds. "First of all, Dearborn, Michigan, and Frankford, Texas, are on American soil, and under constitutional law, not Sharia law. And I don’t know how that happened in the United States. It seems to me there is something fundamentally wrong with allowing a foreign system of law to even take hold in any municipality or government situation in our United States."

Dearborn has a large Muslim population. The concern may be based on some Christian activists claiming they were arrested for trying to distribute Bibles at an Arab festival. The reference to Frankford, a town long ago annexed into Dallas, remains unclear.

Agen shrugged off the Sharia story.

"Reid has been trying to push around her comments for a week to no avail," he said. "Sharron referenced isolated incidents in the news, but clearly stated that there was nothing widespread and that we have freedom of religion in this country. Bottom line: They are losing, they know it, and they are getting desperate."

The Reid campaign said it was Angle who is on the defensive.

"She’s either refused to respond or offered blatant, falsifiable lies to multiple burgeoning scandals," the Reid camp said in a news release titled, "Sharron and the Terrible, Horrible, No Good, Very Bad Week."

Last week was a big one for political pop-ins in the race for Nevada’s 3rd Congressional District seat.

It’s no surprise the suburban Las Vegas district is attracting lots of outside interest. The race is one of the closest-watched contests in the country.

"This race is critically important or the majority leader of the House of Representatives wouldn’t be here talking to you," Hoyer said during his visit.

Romney, who visited Wednesday, called electing Heck and other Nevada Republicans "the most important thing that happens in our life in the next couple of months."

Not surprisingly, both visits centered on a workplace.

Titus was the only freshman member on Hoyer’s tour for "Make it in America," as Democrats call a list of policies they say will result in more manufacturing jobs in the United States.

"In Nevada there are a lot of Americans struggling. For them it is a depression, not a recession," Hoyer said. "Not a week goes by that Dina Titus doesn’t talk to me … about how we can help people who are in such mortgage distress."

Romney and Heck toured Las Vegas Color Graphics, a printing company, with CEO Tim Scheffler and talked about how they believe the government should focus on lowering taxes and reducing regulation on business.

Romney took a direct shot at the $787 billion American Recovery and Reinvestment Act, which Titus supported and Republicans say has done little to nothing to improve the economy.

The former Massachusetts governor said he would like Congress to offer tax breaks that would prompt businesses to invest more in equipment and other capital items.

"When you buy stuff, of course you put people to work," Romney said. "Instead they sent money out to keep the unions happy."