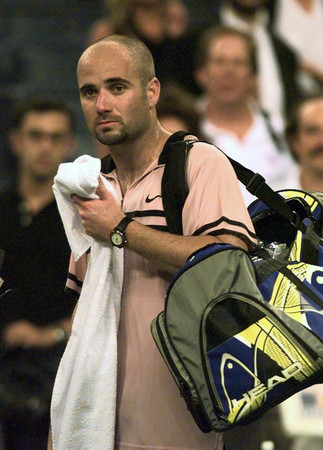 Too often, the motivation behind a tell-all book boils down to money and fame. Andre Agassi has both.

So why would he open the Gates of Hell with a tell-all that’s certain to invite the kind of scrutiny one would only wish on his/her worst enemy?

When the jaw-dropping news broke Wednesday, that was the first question I kept hearing: Why?

Why would someone who had it all, a squeaky-clean sports god beloved in his hometown and around the world, risk the respect he worked so hard to gain?

Part of the answer lies in the book “A Tender Bar,” written by Pulitzer Prize-winning author J.R. Moehringer.

Agassi, who retired from tennis three years ago, had read the 2005 best-seller. It’s a story about a fatherless boy (Moehringer) who grew up in a bar, nurtured by a cast of flawed characters.

Agassi, an eighth-grade dropout who left home for tennis school at 13, felt a to-the-core connection.

He contacted Moehringer. They decided to collaborate. Moehringer moved to Las Vegas and spent long hours interviewing the tennis icon almost daily at the house in which Agassi once lived with Brooke Shields.

The literary result, according to Sports Illustrated columnist Rick Reilly, may be “the most revealing, literate and toes-stompingly honest sports autobiography in history. From the parts I’ve been allowed to read, they might have done it.”

But Reilly, in what appears to be the first review of Agassi’s memoir “Open,” had the same initial reaction as many of us:

“If image really is everything, why would Andre Agassi admit in his new book that he used crystal meth? Not once but dozens of times? And why would he admit he lied about it to the Association of Tennis Professionals?

“Why would a son admit how much he feared his Iranian father — feared him and hated him since the age of 7?”

And why would a man admit he wore perhaps the world’s only Mohawk toupee?

“Why? Because this isn’t just any book,” Reilly wrote.

“Agassi’s early life was not his, never his, not from the beginning, not from the time his Olympic boxer father built a backyard prison especially for him, a tennis court he was figuratively chained to day after day, while his father’s homemade ball machine — the dragon, Agassi called it — ceaselessly spit out balls faster, harder, forever.”

When he couldn’t escape it, “his life became a kind of lie,” wrote Reilly, “from his shoelace groundstrokes to his Mohawk, a hairpiece that once came apart in the shower before the French Open. The day was saved by bobby pins.”

Reilly wrote: “Your own life is hard enough. Living somebody else’s life for them weighs on a man like a stone backpack. By 1997 — even after winning an Olympic gold medal in 1996 — Agassi was down, depressed and stuck playing a game he didn’t love. He was physically wrecked (wrist) and emotionally spent. He was with the wrong woman, Shields, and knew it.

“It was the lowest point in a life that would suddenly begin to soar. You can condemn Agassi all you want for the crystal meth — and he’d deserve it — but remember, Agassi dropped the habit soon after. Then, in 1998, he made the biggest one-year jump into the Top 10 in the history of the ATP Rankings, going from his year-end 122 to No. 6. He would win five of his eight major titles after finding the bottom.

“They call Agassi the greatest returner in history. They aren’t kidding,” wrote Reilly. “Why is Agassi so scorchingly honest in these excerpts? Maybe because he once lived enough lies for five men. Or maybe because, as an educator, he has heard the truth can set him free.

“But hopefully, by the time you close ‘Open,’ you’ll know that this book is about more than the wrong turns he took. It’s about how that broken road led him straight to the good man he is now.”

Sandy Hackett is coming back with another “Rat Pack” reincarnation. After a falling out with the Plaza-based show, “The Tribute to Frank, Sammy, Joey & Dean,” in which he played Joey Bishop, Hackett will open “Sandy Hackett’s Rat Pack Show” next month at the Sahara, where his father, legendary funnyman Buddy Hackett, performed for years.

Broadcast legend Dick Cavett, 72, in the crowd and backstage Tuesday at the Penn & Teller show (Rio).