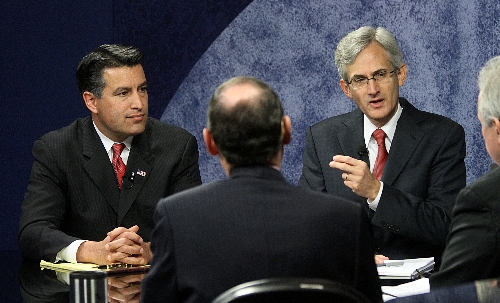 "We don’t need new taxes" Reid said. "The budget I prepared doesn’t have new taxes. We agree on taxes."

Sandoval pledged to veto any tax increase passed by the Legislature and pointedly asked Reid if he would veto a budget that included new taxes.

"I have answered that question a thousand times," Reid responded. "I will advocate for my budget proposal and I will sign it into law. I am not going to do anything other than that."

Neither candidate mentioned if the Legislature approves tax increases, it already has enough votes to override a governor’s veto. Both approval of tax bills and a veto override need at least a two-thirds vote in each house.

Their fourth debate, the last before Tuesday’s election, was broadcast on the Reno-based "Nevada Newsmakers" TV show.

Throughout the campaign, Sandoval has maintained a double-digit lead over Reid.

Much of Wednesday’s debate dealt with taxes and spending.

Reid repeatedly attacked Sandoval for not having plans to balance the state budget, improve education and revive the state economy. Sandoval countered that Reid’s budget plan is a "stack of paper" because it relies of $615 million in revenue that doesn’t exist, depends on $300 million to $400 million gained through efficiencies that aren’t explained and takes $150 million from the Nevada Department of Transportation. That last part of the plan violates the Nevada constitution, Sandoval said.

But Reid said revenue will grow dramatically in coming years as $5 billion in renewable energy projects have been approved for Nevada. The state will become energy independent and sell excess power to California, he said.

He compared Sandoval to actor Michael J. Fox in the "Back to the Future" movies. Sandoval wants to get in a DeLorean and go back to 2007 when state spending was much less, according to Reid.

But Sandoval said the state population has decreased since 2007 and state government needs to balance the budget without tax increases.

Some legislators have contended that the revenue shortfall facing legislators is $3 billion. That is based on their view that revenue should be $8 billion to maintain current services and expected caseload growth over the next two years.

Broadcaster Sam Shad pointed out that Las Vegas economist Jeremy Aguero told the Review-Journal on Tuesday night that rolling spending back to 2007 would be unrealistic.

Sandoval’s repeated response to Shad was: "Reasonable people can disagree."