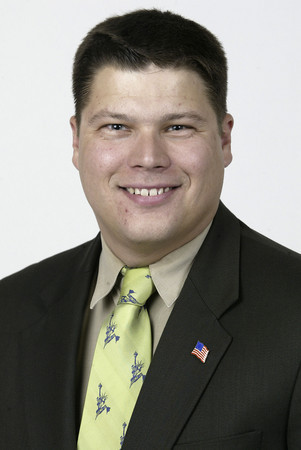 The attorney who was shot multiple times by a Las Vegas police officer during a traffic stop last week denies that he pulled a gun from his pocket, as police said he did.

Raymond James "Jim" Duensing, a 32-year-old lawyer who unsuccessfully ran for Congress, on Sunday used a political Web site to post his account of what happened before the shooting.

The account provides more details of the officer-involved shooting but often conflicts with information in Duensing’s arrest report, which authorities released Monday.

A motorcycle officer stopped Duensing for driving through an intersection in a right-turn-only lane, he wrote on Independent PoliticalReport.com. Duensing said he did signal to the left for his lane change.

He was pulled over on Cheyenne Avenue just west of Michael Way about 2:30 p.m. Thursday. The officer asked him to step out of the vehicle, which he did, Duensing wrote.

He stood with his back to his Pontiac rental car. The car’s open door was to his right. Duensing wrote that his hands were above his head.

"I was calmly speaking to the cop, attempting to talk my way out of being taken to jail over an unpaid High Occupancy Vehicle ticket," he wrote.

While his hands were still above his head, the officer shot him in the chest with a Taser, he wrote. Duensing wrote that he has had heart problems since his premature birth and feared that the Taser would harm him.

"Several people without heart conditions have been killed by this weapon," he wrote.

He said that instinct took over then. He moved toward the back of his vehicle and pulled the Taser’s prongs from his chest.

"The juice then flowed through my arms — not my heart," he wrote. "As I lay here in my hospital bed, I firmly believe this instinct saved my life."

He continued running away from the officer. He heard the officer fire the Taser again, but Duensing said he didn’t feel another shock.

He said he ran down the sidewalk "with empty hands." He said he heard three shots from behind him and noticed his left arm dangling. A second officer who was performing a different traffic stop took him down, he said.

"It was at this point that he found my licensed and registered pistol in my right cargo pants pocket and my Emerson folding knife in my right front pocket," he wrote.

He wrote that he is a firearms instructor and always carries a gun and at least one knife.

"I NEVER pulled either of these items out of my pockets," he wrote.

He was taken to University Medical Center and booked in absentia on a felony charge of resisting arrest with a deadly weapon.

A 19-year-old witness told the Review-Journal that she did not see Duensing with a gun. As he fled, it appeared that he was trying to hold his pants up, she said. She also said she did not see a Taser used.

The police account said that Duensing was combative with the officer from the start and that Duensing did pull the gun from his pocket. In Duensing’s arrest report, officers wrote that once he exited his vehicle, he "immediately took a fighting stance" and refused to put his hands behind his back.

The officer tried to handcuff Duensing who "physically resisted and began fighting" with the officer. The officer used a Taser on Duensing twice, according to the report.

"Duensing continued to run and then reached into his right cargo pants pocket, pulling a semiautomatic handgun from the pocket," the report said.

That’s when the officer fired at Duensing.

The officer, David Gilbert, has been with the department since 1993. He has been placed on routine paid administrative leave.

"This investigation is ongoing, and all of the details are being looked into," Loretto said.

He has a broken arm from one bullet, which entered his right pectoral, bounced off his sternum, went through his left pectoral and shattered his humerus just above his left elbow, he wrote. The second shot went into his lower right abdomen and exited his left abdomen without hitting any vital organs, he wrote.

One shot did not hit him. All three shots were fired from behind him and to the right, he wrote.

Duensing said he has surgery scheduled Wednesday to repair his broken arm.

"I’m going to pull through it, and the prognosis looks good," he said.

Duensing unsuccessfully ran for Congress against Shelley Berkley, D-Nev., in 2008, 2006 and 2004, generally garnering 2 percent to 3 percent of the vote. He has declared he is running against Harry Reid for the Democratic majority leader’s Senate seat next year.