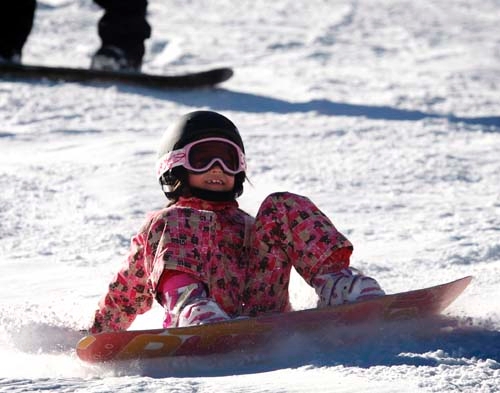 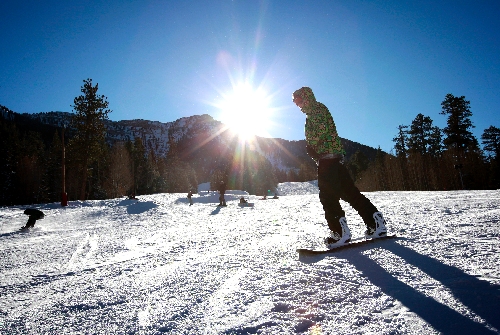 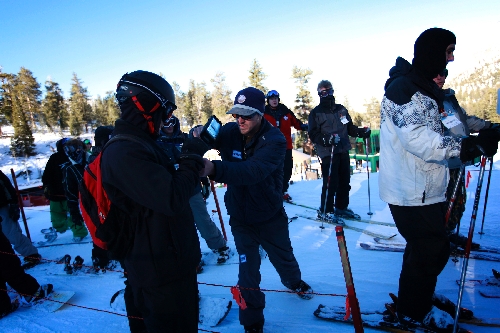 In 2005, Alaskans experienced the first tornado in the state’s recorded history.

In 1943, the temperature rose 49 degrees in two minutes in Spearfish, S.D.

And in December 2011, more snow fell on the ground in the southern end of Nevada than in the north.

"We are having a phenomenal year," Stickelman said. "Our visits are way up and our season passes are up more than 10 percent."

Stickelman said more locals are staying closer to home to do their skiing and more tourists are traveling to the mountain from the relatively barren ski resort areas of Utah, Northern California, Colorado — and yes, Reno and Lake Tahoe.

"We’re one of the only resorts with open terrain parks," he said, "and that’s bringing us the action sports crowd that’s into that whole scene."

Eighty-two inches of snow has hit the ground at Lee Canyon since October, with most of that coming the first 18 days of this month. Stickelman said there is a solid 50-inch base .

Meanwhile, the Mt. Rose ski area between Reno and Lake Tahoe has seen total snowfall of between 21 and 24 inches since the season began — and all of that fell in November. The base is an anemic 12 to 18 inches, according to a Reno-based travel website.

"It is very highly unusual for Northern Nevada to see less precipitation than Southern Nevada," said Chris Stachelski, a meteorologist with the Las Vegas office of the National Oceanic and Atmospheric Administration.

And while the nearly 7 feet of snow that has accumulated on parts of Mount Charleston since the ski season began Nov. 18 is above average for this time of year, the meager 2 feet that has fallen near Reno is way below normal, almost historically so.

"This could be the driest December on record for Northern Nevada," said Stachelski. "There’s been zero precipitation this month in Reno, and Elko has seen only a trace."

The last time the region had a snowless December was in 1883, he said. "And we’re not forecasting any for the next seven days."

According to Stachelski, there are a several reasons for the lack of snow in the north.

The storms that have hit Southern Nevada in recent weeks were well-developed by the time they "blew up" over the mountain, he said, while Reno has yet to get a storm strong enough to trigger a significant snow event.

"There’s been no rain, no snow, no nothing in Reno and the Sierra Nevada range this month," said Stachelski, who attributes at least a small measure of the dry spell to La Niña.

La Niña is an occasional weather phenomenon characterized by unusually cold temperatures near South America in the Pacific Ocean.

"This isn’t due just to La Niña," he said. "We’re getting lots of signals in the atmosphere, but we do know the dry weather won’t change for the next few weeks."

Stachelski noted winter doesn’t officially start until Thursday, and he holds out hope Northern Nevada might get more snow.

He said the winters of 2006 and 2007 were dry in December and January, but February and March were wetter than usual.

"We might get midway through winter and see it snap, but it will have to be substantially wetter to get back to normal precipitation," he said.

In contrast, Stachelski said the colder winter temperatures throughout Southern Nevada this fall have helped extend the overall weather pattern. The storms tracked from British Columbia, he said, but a high-pressure system in the north kept them from dumping rain or snow until they reached a chilly Southern Nevada.

Stachelski also said that while a bone-dry December is odd for Northern Nevada, dry winters are not rare.

"It isn’t uncommon to have a dry winter after a wet winter," he said. "The Sierra had a near-record snowpack last year. Sometimes we even get two or three dry winters after a really wet one."

Fortunately, ski resorts in the Sierra are using technology to do what Mother Nature has not: employing snow-making machines to give skiers and snowboarders a reason to get outdoors.

An Associated Press report in Monday’s Las Vegas Review-Journal said the Boreal Mountain Resort near Tahoe had sprayed more than 32 million gallons of snow this season, a record.

Last year the resort set a different kind of record when about 66 feet of snow — the natural variety — fell over the course of the season.

But that snow melted long ago, and this year it’s a different game — one that Stickelman is happy to play.

"It’s a rare event for us to catch these storms," Stickelman said. "They’ve dumped 82 inches of snow on us since October, and I can tell you we are very pleased with that."