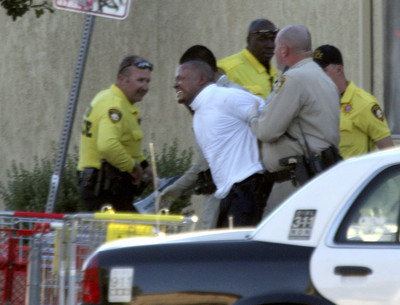 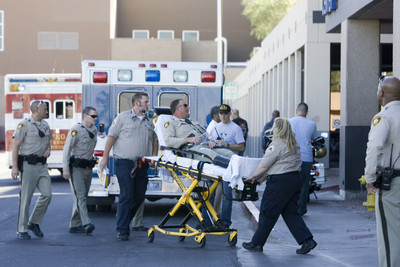 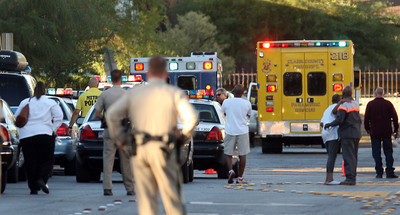 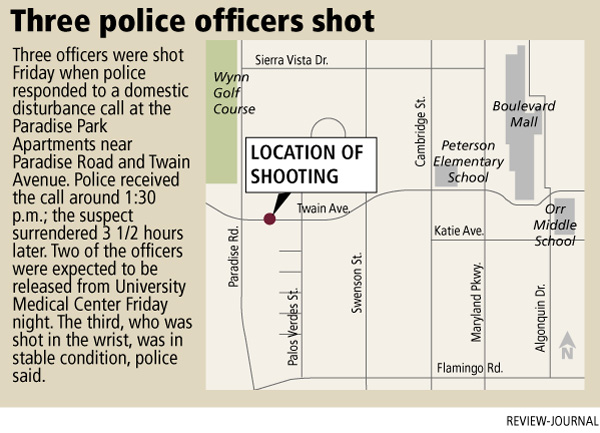 Police received a 911 call about 1:30 p.m. from a woman who said she was fighting with her son. She told officers that her son might be on drugs, police said.

Screaming and threats could be heard by officers as they pounded on the door of the woman’s unit at the Paradise Park apartments, near Paradise Road and Twain Avenue, Clark County Sheriff Doug Gillespie said.

One witness heard a man say, “My momma’s coming out,” and then the shooting started.

One of the officers was shot in the right wrist. Surgeons operated on the officer Friday at University Medical Center, and he was expected to be released from the hospital today.

The other two officers were spared serious injury by a protective vest and an equipment belt. Police said a bullet lodged in the left chest area of one officer’s protective vest. A bullet ricocheted off the other officer’s utility belt. Both were taken to UMC and released Friday night.

The names of the officers were not released.

The suspect surrendered to police about 5 p.m., after hours of negotiation, but not before a barrage of gunfire was exchanged between at least one officer and the suspect.

Some of the exchange was captured by a television news crew. An officer could be seen firing a rifle into a second-floor apartment. Blinds darted back and forth as bullets entered a window of the unit.

The suspect’s identity was not released, but police said they expect to charge him with multiple counts, including attempted murder with a deadly weapon on a police officer.

Dozens of police cars raced to the scene after the initial call went out that one officer was down and another shot.

One witness said she had never seen so many police officers descend so quickly on a single location.

Gillespie praised the officers who engaged the shooter.

“If this isn’t bravery to the extreme, I don’t know what is,” the sheriff said.

Police said the woman’s daughter was also in the apartment when the confrontation began. Both escaped unharmed and were cooperating with authorities.

Charles Smith was riding his bike on Elm Street, just past Paradise, when he heard the suspect yell and then fire the first shot.

“I ripped it,” said the 19-year-old, who quickly pedaled away from the gunfire. “I was shaking.”

Smith said he heard three shots in about 15 seconds and then a barrage of gunfire erupted.

The teen stopped his bike in the street and halted traffic so that cars wouldn’t drive into the gunfire, he said.

“I just hope my friends are OK,” Smith said as he searched for familiar faces during the standoff.

Negotiators with the SWAT team began talking with the suspect, who remained inside the second-floor apartment. As negotiators tried to persuade him to surrender, officers evacuated nearby residents.

“This is a very difficult area for us to contain,” Gillespie said. “It’s a densely populated area, and we don’t need anyone wandering into this area.”

Thousands of Las Vegans were affected by the shooting. Residents were forced from their homes, roads were blocked, and several nearby schools were locked down for hours during the standoff.

Mildred Whipple, a diabetic, was forced to wait hours before gaining access to her insulin in her unit at the Paradise Park apartments.

“I just had a miserable day, today,” she said. “It was like being in jail.”

Police gave her raisins and water.

After police took down their crime scene tape, Whipple headed straight to the Sicilian Pizza Chicken Wings restaurant on Palos Verdes Street. “Next time, I’ll be prepared,” she said.

Jim Fraser, a resident of the apartment complex, said he wasn’t surprised by Friday’s incident.

“It’s a natural thing in this area,” he said. Fraser was on Eastern Avenue when he saw police cruisers speed by and joked they were probably going to his neighborhood.

Others expressed sympathy for the officers who were injured trying to protect the community.

Martin Velasquez, a father of two who lives on Palos Verdes Street, said, “People get so crazy. They don’t care they are putting others’ lives at risk.”

In the past two years, three officers have been wounded in shootouts in two separate incidents.

The first Las Vegas police officer slain in the line of duty in 17 years was responding to a domestic violence call on Feb. 1, 2006. Sgt. Henry Prendes, a 14-year veteran, was shot and killed by Amir Rashid Crump, 21. Crump was killed after engaging other officers in a gunbattle.

Two of the officers shot in Friday’s incident are from the South Central Area Command, and the third is a motorcycle traffic officer. All three work patrol beats.

“I’m very glad they found a peaceful resolution to the problem,” said Whipple. “It was like a circus, but everything came out all right.”