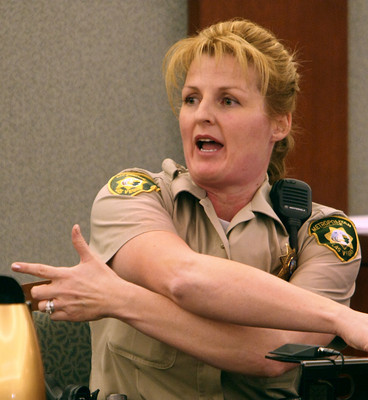 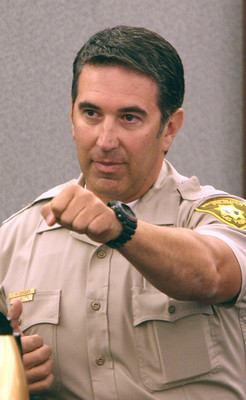 Officer Timothy Nicothodes said he reacted with deadly force when he saw the suspect point a gun at officer Nichole Splinter.

“He was going to shoot her if I didn’t fire,” Nicothodes testified.

“I thought I was going to die,” she told the jury.

The panel’s six women and one man deliberated for about 40 minutes before reaching a verdict. All but one of them signed off on the decision.

Evidence presented during the coroner’s inquest revealed that Joseph M. Justin, 28, had methamphetamine in his system when the officers encountered him on Aug. 22. The Las Vegas man died at Sunrise Hospital and Medical Center shortly after the shooting.

Splinter and Nicothodes testified without emotion about the incident. Both said they would change nothing about the way they handled it.

If faced with the same set of circumstances again, Splinter told the jury, “I would hope I wouldn’t act any differently.”

Justin’s mother and girlfriend, who watched the proceedings, were not convinced that the officers had no other choice but to shoot him.

Nicothodes testified that he used a stun gun on the suspect, but it had no effect.

Donna Justin wondered aloud, in an interview with the Review-Journal, why Splinter had not tried the same tactic. She also asked why none of the witnesses saw the gun in her son’s hand.

“I guess as a mom, I’ll always have to ask these questions,” she said.

Splinter testified that she had pulled out her stun gun during the incident but replaced it with a firearm after she realized that Justin had a firearm. Nicothodes testified that he did the same.

Officers are trained to match or exceed the level of force used by a suspect, Splinter said.

Those who witnessed the events preceding the shooting said they took cover when they heard police say the suspect had a gun. None of them watched the shooting.

Testimony during the inquest lasted about half a day. All of the jurors declined to comment on their decision.

The events that led to the shooting began around 10:30 a.m., when Roberto Martinez called 911 to report a burglary in progress at his neighbor’s home on Florrie Avenue, near Twain Avenue in Southeast Las Vegas.

Splinter and Nicothodes, who were about to break for lunch, responded immediately and saw the suspect driving away in a white van. The officers said the suspect sped away upon their arrival and crashed his vehicle moments later.

Witnesses said Justin began to run from the van but then returned to the vehicle, where he bent down and appeared to be searching for something.

“As soon as he raised up, the woman officer started screaming, ‘He’s got a gun!'” said Roy Marchand, another Florrie Avenue resident.

Marchand said Splinter impressed him by warning Mario Amarillas, one of his neighbors, about the weapon. Amarillas had come out to confront the suspect after the crash, but the officer told him to get out of the way.

“I wouldn’t have kept my composure at that point,” Marchand said, adding that he would have started shooting sooner.

Splinter, who joined the Metropolitan Police Department seven years ago, testified that she has more than 16 years’ experience in law enforcement.

Both she and Nicothodes said they never before had fired a gun in the line of duty.

Splinter testified that she ordered Justin to drop his gun after she saw him put it to his temple, but he refused and instead pointed it at her. She said she then fired one shot and immediately heard a second shot before the suspect dropped to the ground.

The officer testified that she approached the suspect, checked him for weapons and heard his labored breathing.

“I just talked to him,” Splinter testified. “I told him to breathe, to just stay with me.”

The testimony caused Justin’s girlfriend, Monica Yurek, to begin crying. Yurek and Donna Justin, who sat together, frequently submitted written questions for witnesses during the hearing, although they submitted none for Splinter.

Nicothodes, who has worked for the Metropolitan Police Department for eight years, said he previously spent five years working as a special agent for the Drug Enforcement Administration.

Homicide Detective Joel Kisner said evidence showed that Splinter shot Justin in the leg, and Nicothodes shot him in the back.

Kisner also testified that both of the probes from Nicothodes’ stun gun had landed in the sole of Justin’s shoe.

“He would have felt nothing,” the detective said.

Kisner said the .357-caliber Magnum revolver handled by Justin during the incident had been stolen that morning from a home on Florrie Avenue. Investigators found three other firearms in Justin’s van, the detective said.

The detective told jurors that Justin’s confrontation with police, from the time the pursuit started until the shooting was reported, lasted 45 seconds.

Donna Justin, who lived with her son and Yurek, said her son had finished serving a prison term for burglary in October. She said he left home the morning of the shooting to help a friend move.

Yurek said she is due to give birth to the couple’s second daughter in January. She said their first daughter is 6.

The woman said everybody makes bad choices, but her boyfriend had a big heart and “wasn’t a bad person.”

“He didn’t have to pay with his life,” she said.