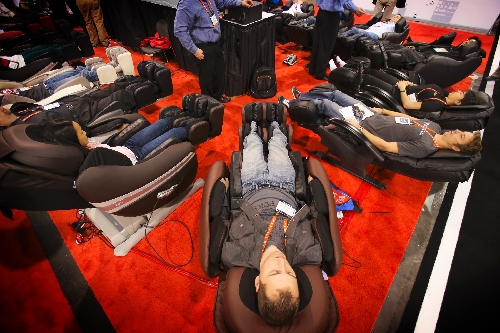 A failed murder plot took a turn toward Greek tragedy last week, when police revealed that the wife of the intended victim may have been romantically involved with the son she enlisted for the crime.

Amy Pearson, 42, also known as Amy Bessey, was arrested by Las Vegas police on charges of attempted murder, battery and conspiracy to commit murder against her husband, Robert Bessey, 49.

Police said she convinced her son, Michael Bessey, 21, and her brother, Richard Pearson, 39, to kill her husband as he drove on Interstate 15 near the Valley of Fire on Nov. 14.

Robert Bessey was hit in the neck by a shot fired from an SUV that pulled next to his car, but he survived.

Michael Bessey and Richard Pearson were charged in the plot last year. Police hadn’t implicated Amy Pearson until her arrest, but she had been a prime suspect for months.

The reviews would be similar to inquests – witnesses and officials will state what they know about the incidents in front of a hearing master. Fewer people would testify, however, and they wouldn’t do so in a courtroom or in front of a panel of citizens.

In what would mark the first use of hydraulic fracturing, or fracking, in Nevada, Houston-based Noble Energy Inc. is pursuing plans to drill for oil and natural gas near the city of Wells, about 400 miles north of Las Vegas.

Noble’s proposal to drill as many as 20 exploratory wells more than a mile deep on public land in Elko County is undergoing an environmental assessment by the U.S. Bureau of Land Management.

Family members at the center of a Sunday shooting in which a pet dog was killed by a Las Vegas police sergeant aren’t strangers to officers in the downtown area, according to new information from police.

Officers have visited or been dispatched to the home 25 times since 2008, mostly on reported domestic disputes. Three of the calls resulted in citations and one in an arrest.

But resident Victor Patino, 23, said the family’s history with police is no excuse for an officer to come into his backyard and kill Bubba, his 6-year-old bully pit bull.

Las Vegas firefighter George Tiaffay, charged with hiring a homeless man to kill his estranged wife, told a district judge that he is not guilty.

Then, a few hours later, the killer, Noel "Greyhound" Stevens, admitted to Judge Jerry Tao that he used a hammer to kill Shauna Tiaffay in September and that George Tiaffay paid him $600 to do it.

Stevens won’t be sentenced for first-degree murder and five other charges until after he testifies against Tiaffay, who faces trial next year.

The Department of Energy set a new 2048 target to open a burial site for nuclear waste – a deadline 50 years later than originally planned.

Under the new timeline, an interim above-ground storage site would be built by 2021.

A larger, temporary facility would be built by 2025, and a permanent underground dump site would follow by 2048.

The DOE did not specify locations for the projects, saying it would pursue a "consent-based" strategy to recruit volunteer states and communities.

Once upon a time, the government envisioned opening a repository at Yucca Mountain in Nevada by 1998. Later it was revised to 2020.