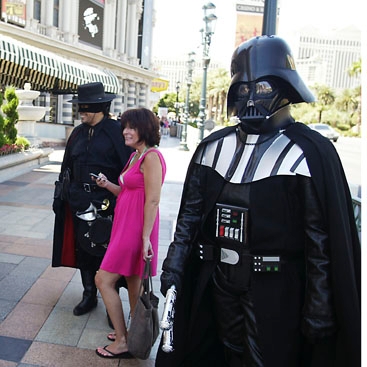 Zorro and Darth Vader formed an unprecedented alliance Thursday when they joined forces to take on the Metropolitan Police Department, Sheriff Doug Gillespie and a Strip megaresort.

This time the characters are doing battle with neither sword nor lightsaber, but with a legal team from the American Civil Liberties Union of Nevada.

Zorro, the alter ego of Jason Perez-Morciglio, and Darth Vader, the alter ego of Jason’s younger brother, Sebastian, filed a federal lawsuit Thursday in Las Vegas that alleges Venetian security officers kidnapped them and detained them for more than an hour on Jan. 15 before kicking them off the property. The lawsuit also alleges two Las Vegas police officers illegally handcuffed and searched them at the resort.

Although the brothers frequently perform on the Strip in exchange for tips, usually at the Bellagio or Paris Las Vegas, they said they were doing nothing other than standing on the sidewalk in front of The Venetian before they were confronted. Sebastian wasn’t even in costume.

"There has been a long history of litigation concerning the right of the public to express themselves on the public forum of sidewalks going up and down the Las Vegas Strip," ACLU attorney Allen Lichtenstein said. "In particular, both the United States District Court and the (9th U.S. Circuit Court of Appeals) have explicitly stated that the sidewalk in front of The Venetian is a public forum. Unfortunately, the hotel doesn’t appear to feel bound by the courts’ decision."

No one at The Venetian could be reached for comment Thursday.

The brothers’ lawsuit comes nearly a year after the ACLU filed a complaint on behalf of two other street performers, guitarist Suze Banasik and Elvis impersonator Bill Jablonski, who accused Las Vegas police of harassing them on the Strip. That case is pending in federal court.

Over the years, the ACLU has fought and won similar First Amendment battles for handbill distributors, political activists and street preachers on the Strip and at the Fremont Street Experience.

Jason Perez-Morciglio said he studied up on his rights after moving to Las Vegas in December with his brother and knew about the ACLU’s other cases.

The pair contacted the organization shortly after their encounter with officers at The Venetian.

Jason Perez-Morciglio, a former tango instructor who had performed as Zorro on the streets of Hollywood for several years, said he came to Las Vegas for artistic inspiration and cheaper housing. He also started a film production company here.

The Zorro impersonator said he hopes to achieve one goal with the lawsuit: "freedom."

As Buddhists, he explained, he and his brother believe in cause and effect.

"There’s no good if you don’t face bad and try to make a difference," Jason Perez-Morciglio said.

He takes his Zorro performances seriously and believes his talents make Las Vegas a better place for tourists. Sebastian Perez-Morciglio said the role playing is also fun for the brothers.

According to the lawsuit, Jason Perez-Morciglio was throwing away trash in front of The Venetian on Jan. 15 when security officers "kidnapped the brothers, forced them into a small room inside the Venetian Hotel and detained them."

"These security guards handcuffed the brothers, searched their persons and belongings, demanded identification, and photographed them," the document said.

"Each of the brothers was strapped to a chair and kept by the security guards for over an hour."

The lawsuit alleges that the security officers then summoned two Las Vegas police officers who handcuffed and searched the brothers before directing them to sign misdemeanor trespass warnings. The police officers were identified only as S. Schaier and T. Scott.

"Thereafter, the brothers were escorted from the premises to the parking lot in the back of Harrah’s Las Vegas Casino by the security guards and were warned not to ‘trespass’ on the sidewalk in front of the Venetian Hotel again or else face arrest," according to the document.

The lawsuit alleges Gillespie "has failed to train his officers to adequately protect constitutional rights on the Strip."

When contacted after hours Thursday, Gillespie declined to comment on the complaint, which he said he had not seen.

The brothers said they have avoided walking past The Venetian since the incident. They returned for the first time Wednesday to pose for a Review-Journal photographer.