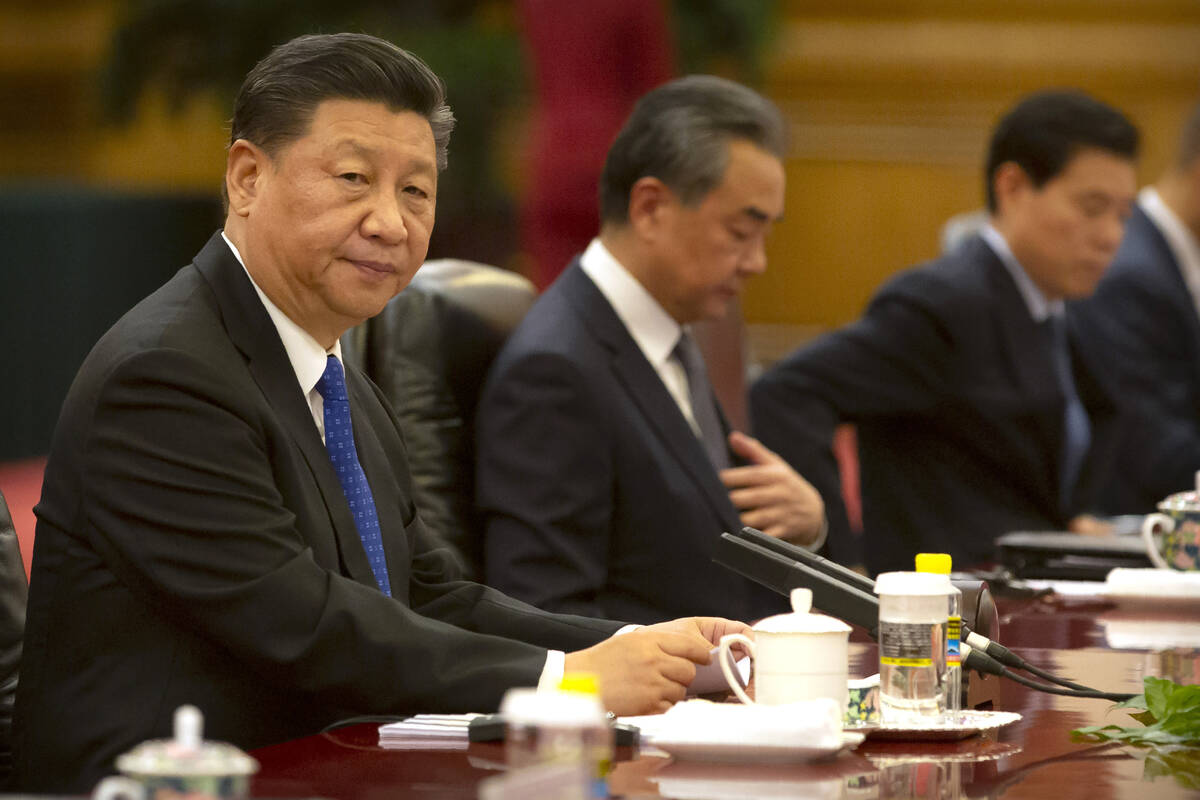 FILE - In this July 2, 2019, file photo, Chinese President Xi Jinping sits during a meeting at the Great Hall of the People in Beijing. Chinese authorities have declined to renew the press credentials of a Beijing-based Wall Street Journal reporter. The de facto expulsion Friday of Singaporean reporter Chun Han Wong comes one month after he and another WSJ reporter published a story detailing an Australian investigation which allegedly links a cousin of Chinese President Xi Jinping to possible money laundering and organized crime. (AP Photo/Mark Schiefelbein, Pool, File)

China’s repressive COVID policies have now pushed many of its citizens to the streets in protest, a rarity in authoritarian regimes that reject basic freedoms. The unrest, which has spread throughout the country, was apparently triggered, according to news accounts, when 10 people died in an apartment fire in the nation’s northwest region after pandemic restrictions hindered rescuers.

The Biden administration responded by supporting the rights of the Chinese people to express their displeasure. “We’ve long said everyone has a right to peacefully protest, here in the United States and around the world,” a White House statement said. In Canada, Prime Minister Justin Trudeau picked up on the theme. “Everyone in China should be allowed to protest,” he said. “We will continue to ensure that China knows we will stand for human rights and with people who are expressing themselves.”

It’s certainly important for the United States and the West to stand with those trying to exercise basic freedoms in a communist dictatorship. Such a show of solidarity can be a powerful incentive for those suffering under the thumb of totalitarianism. Yet it’s worth remembering how pandemic protesters were treated not so long ago in both the United States and Canada.

Those who took to the streets to peacefully protest government-ordered lockdowns and other restrictions in the United States were sneered at by progressives as members of a death cult. Parents who objected to school closures were scorned by members of government teachers unions, who marched with coffins and body bags as they warned of dying children.

In Canada, truckers who organized in opposition to the nation’s draconian pandemic border and vaccine policies were smeared as right-wing extremists. Mr. Trudeau even evoked emergency powers that allowed the authorities to demand financial information from protesters, limit public gatherings and freeze the financial accounts of demonstrators.

The Biden administration did not rush to the defense of the truckers.

This is not to say that the United States and Canada — among the world’s most free nations — are on a par with the Chinese autocracy. Far from it. Nor should protesters, regardless of their cause, be immune from criticism. But, as Christian Britschgi of reason.com notes, it seems that the view of Mr. Biden and Mr. Trudeau “of the right to demonstration hinges far more on (their) own political self-interest than on any principled commitment to free expression.”