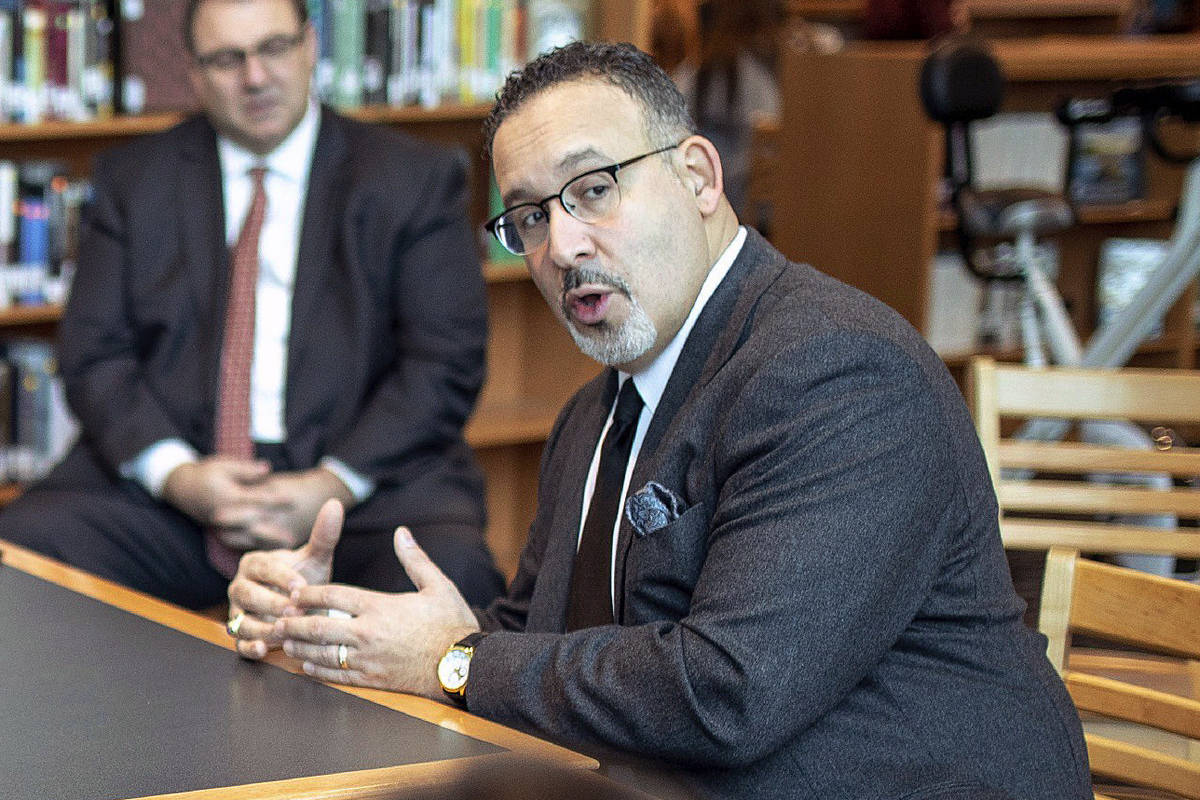 In this Jan. 28, 2020 file photo, Connecticut State Commissioner of Education Miguel Cardona speaks with Berlin High School students while on a tour of the school. President-elect Joe Biden has chosen the education commissioner for Connecticut and a former public school teacher to serve as education secretary. (Devin Leith-Yessian/Berlin Citizen/Record-Journal via AP)

Several of Joe Biden’s Cabinet picks have left much to be desired, particularly members of his economic team, which signals a return to the slow growth and destructive tax and regulatory policies that characterized Barack Obama’s eight years. But on the plus side of the ledger, Mr. Biden’s pick for education secretary stands out as potential evidence of the new administration’s commitment to unify rather than divide.

Last week, Mr. Biden announced he would nominate Miguel Cardona to lead the Department of Education. Mr. Cardona became Connecticut’s top education official in 2019 after serving as an assistant school superintendent in a small district in the state. He began his career as an elementary school teacher and eventually became a principal for 10 years.

During the campaign, Mr. Biden told the National Education Association that his victory would mean “you don’t just have a partner in the White House, you’ll have an NEA member in the White House.” Top teacher union officials were reportedly considered for the education post. Such a selection would have guaranteed a continuation of the failing status quo at the expense of American students and much-needed reform.

Mr. Cardona’s record, on the other hand, indicates more moderate tendencies. He has called charter schools “a viable option” for students, particularly those from poor backgrounds. While he has been a critic of using testing as a means of gauging teacher effectiveness, he directed Connecticut this month to push forward with student accountability assessments. “State tests are the most accurate guideposts to our promise of equity for ALL,” a memo from his department read.

Finally, Mr. Cardona has expressed support for opening classrooms to ensure that students who can least afford it don’t fall further behind thanks to the inadequacies of remote learning. Mr. Cardona and Connecticut Gov. Ned Lamont have “made it a priority to keep schools open for in-person learning amid the ongoing coronavirus pandemic,” the Hartford Courant wrote this month, “They have said there is little evidence of COVID-19 transmission within schools and that there are numerous social, emotional and educational benefits to in-person classes as opposed to online learning.”

Ultimately, Mr. Cardona’s job will be to carry out the policies of the Biden administration, not his own. Mr. Biden’s fealty to the faltering education establishment and pressure from the hard left could certainly lead to many unwise education proposals — blanket student loan amnesty, for instance. But Mr. Cardona’s devotion to education as a means of empowering underprivileged children bodes well for those seeking alternatives to failing schools, and his advocacy for getting students back into the classroom will help move states such as Nevada in the right direction.