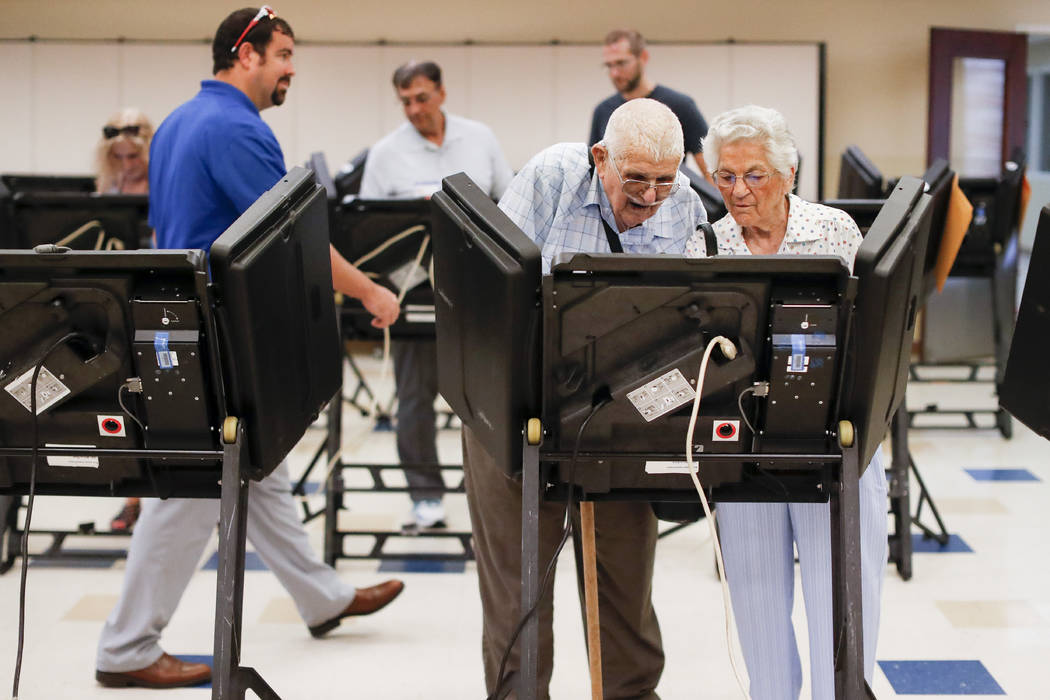 Voters cast their ballots among an array of electronic voting machines in a polling station at the Noor Islamic Cultural Center, Tuesday, Aug. 7, 2018, in Dublin, Ohio. Two-term state Sen. Troy Balderson, is fighting off a strong challenge from Democrat Danny O'Connor, a 31-year-old county official, in a congressional district held by the Republican Party for more than three decades. (AP Photo/John Minchillo)

As early voting begins, Nevadans face six statewide ballot questions on issues ranging from taxes to energy to voting. On Wednesday, we urged a “yes” vote on Question 3, the Energy Choice Initiative. The remaining measures aren’t worth supporting.

Question 1, called Marsy’s Law, would enshrine a victim’s bill of rights into the Nevada Constitution. That sounds appealing on the surface. Good intentions alone, however, rarely create wise public policy. In fact, this proposal is complicated, confusing and could actually undermine some provisions in the Bill of Rights. It could also subvert open government and accountability. After Marsy’s Law passed in South Dakota, for instance, police stopped telling the public where crimes had been committed under the guise of protecting the rights of victims. The proposal is no doubt well-meaning, but Nevada crime victims already have certain rights when dealing with law enforcement and the judicial system. Vote no on Question 1.

Question 2 would exempt feminine hygiene products from the sales tax. Question 4 would exempt certain medical equipment from the sales tax. Low taxes are good, and letting people keep more of their own money is desirable, but creating exceptions for special interests isn’t the way to craft fair and sensible tax policy. Exempting some items from what should be a broad-based tax only increases the likelihood of sales tax increases on items still subject to the tax. Vote no on Question 2 and on Question 4.

Question 5 would automatically register to vote anyone who goes to the DMV for a driver’s license or identification card. While increasing civic engagement is an appealing goal, taking the decision of whether to register out of an individual’s hands and turning it over to the government is a bad approach, and there’s no evidence it would lead to higher turnout. In addition, the DMV doesn’t check citizenship status. Nevada has issued driver’s licenses to more than 20,000 legal immigrants. Question 5 would have placed those individuals on the voter rolls unless they had chosen to opt out. This isn’t a theoretical concern. California has had a similar system since 2016. Earlier this month, officials admitted that 1,500 people had been wrongly registered. Vote no on Question 5.

Question 6 would mandate that Nevada generate 50 percent of its energy from renewable sources by 2030. The law currently requires that Nevada receive 25 percent of its energy from renewable sources by 2025. Proponents claim that failing green energy prices mean this initiative will save consumers money. If that’s true, a law won’t be necessary to force utilities to increase purchases of renewables. And what happens when the green subsidies dry up? The marketplace, not bureaucratic intervention, is the best means of determining the most efficient and cost-effective means of energy production. Vote no on Question 6.