It may be news to political activists and a Beltway intelligentsia transfixed by Washington’s relentless conflicts, but millions of ordinary Americans manage to carry on with their lives — work, family, friends — regardless of who occupies the White House or controls the House and Senate. The affairs of day-to-day life — mundane, at times, but vital to personal respect and a healthy community — take priority over the constant cacophony that today dominates the nation’s capital.

And constant it is. Many Democrats have complained that the impeachment proceedings against President Donald Trump have been met with a giant yawn in pockets of the country. New York Times columnist Maureen Dowd bemoaned recently that “no one cares” about the historic attempt to remove Mr. Trump from office. “One Democratic staffer mourned the apathy,” she wrote. “ ‘Our phones aren’t ringing,’ he told me. ‘Nobody cares. It is the saddest thing ever.’ ”

But what should one expect? In this age of social media and the 24/7 news and opinion cycle, Americans are bombarded and assailed by partisan hype, gloom and doom from the moment they sip their morning coffee to the moment they switch off the lights. They aren’t unaware of their civic responsibilities, but they also don’t feel the need to immerse themselves in the pettiness and vitriol that characterizes so much current political discourse, regardless of party. They have more important things to worry about and aren’t invested in the overheated notion, depending on perspective, that Mr. Trump or House Speaker Nancy Pelosi are either saviors seeking to preserve democracy or the most pressing threats to the republic since its founding.

The impeachment trial, after all, is essentially over — and it ended up right where all but the most dreamy Democrats knew it would. The Senate will vote to acquit Mr. Trump, and Democrats, who have spent the past three years seeking to overturn the 2016 election, will, with straight faces, declare the death of American democracy. The over-the-top partisanship and divisive rhetoric will grow only more heated, particularly as the election approaches.

Because that’s what all this is really about, isn’t it? Positioning for the 2020 election? Nobody in Washington truly believes that, had a more conventional president made a misguided and ham-fisted effort in a monitored phone call to lean on an ally to investigate a political opponent involved in potential corruption, it would have culminated in the drastic step of an impeachment trial. But Democrats break into hives at the mere thought of four more years of Mr. Trump and face the risky prospect of a radical leftist as their November standard-bearer. Hence, the desperate measures.

Ignore the lofty rhetoric about the Founding Fathers and “high crimes and misdemeanors.” It doesn’t take a cynic to suspect that his futile impeachment was no high-minded defense of the Constitution. Rather, it was intended both to damage vulnerable Republican senators in an effort to boost Democratic chances to retake the upper chamber and to further stoke a sense of Trump fatigue among vital independents and moderates, particularly in battleground states. Perhaps it will work. Perhaps it will backfire, as the GOP discovered in 1998. The American voters will decide in nine months, as it should be.

In the meantime, Democrats have already begun mewling about Mr. Trump’s acquittal being “illegitimate.” They are certainly free to pound the table or hold their breath in furious protest. But there’s nothing “illegitimate” about it. The Constitution lays out the process for impeachment. The House, wisely or not, voted on the articles and delivered them to the Senate, which held a trial. There are not enough votes to convict. The system worked as intended. Case closed. And for most Americans, life marches on, even as Washington spirals deeper into dysfunction. 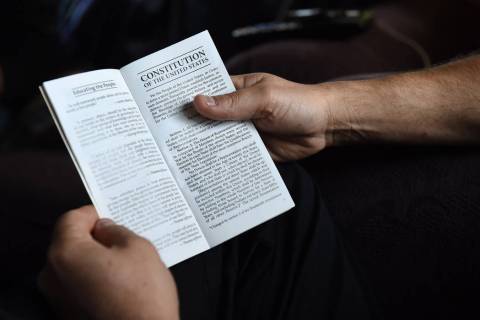