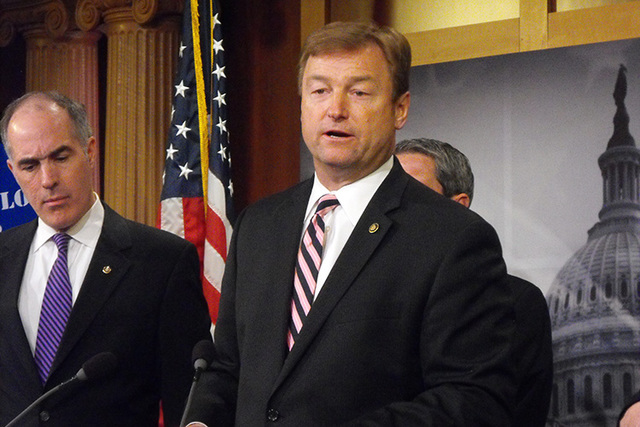 U.S. Sen. Dean Heller may support some of the programs and services provided by Planned Parenthood, but he opposes federal funding for the group because it provides abortions.

That succinct summation of Heller’s position became necessary on the heels of a chaotic, boisterous Reno town hall meeting last week in which Heller blurted to an angry crowd that, “I will protect Planned Parenthood,” and, “I have no problems with federal funding for Planned Parenthood.”

In fact, Heller does have a problem with federal funding for Planned Parenthood. A big one.

His spokeswoman, Megan Taylor, clarified thus: “Senator Heller has worked hard to improve women’s access to health care and the quality of care they receive,” she wrote in a statement. “While he doesn’t have a problem with many of the health care services Planned Parenthood offers to women, he is opposed to providing federal funding to any organization that performs abortions and is supported by taxpayer dollars; he has a long record that reflects his position.”

Second, while all money is certainly fungible, Planned Parenthood is prohibited by law from providing abortions using federal funds. Instead, those funds go to pay for the health care services such as cancer screenings, birth control and education, which Heller apparently supports.

So, what happened? Why did Heller tell the audience he believes something that’s the exact opposite of what he actually believes?

To be fair to the senator, the town hall was loud and unfriendly. Political opponents were in the crowd, spoiling for a fight with Heller, and boos and jeers were common.

Heller had helped whip up passions by saying he’d do a town hall meeting only if there were no boos or applause, and later that he’d agree to hold the forum because “that’s one of the boxes that you’ve got to check.”

But it’s hard enough to speak in front of a crowd when the audience is silent and friendly. It’s much harder when the crowd has plenty of people who’re shopping for a videotaped flub they can use to help defeat you at your next election.

As someone who’s been in front of plenty of cameras and crowds, I can attest how easy it is to say the wrong thing.

Whether Heller got rattled by all the opprobrium, blurted out something he thought might placate the crowd or just mangled his message, he ended up doing himself more damage in the long run.

Progressives immediately seized on the inconsistency, accusing Heller of trying to have it both ways. Conservatives jumped on him, too, accusing him of shifting his stance for political expediency.

He could have simply told the crowd that he is pro-life, and those beliefs prevent him from supporting Planned Parenthood, and that if that issue was something a voter could not look past, perhaps that person should consider somebody else come Election Day. Saying that probably wouldn’t have cost him any votes, and may have earned him one or two.

Make no mistake: Heller is in a fight for his political life, and has been for quite some time. His every public utterance from now until Election Day 2018 will be scrutinized, dissected and criticized.

Keeping a consistent message in the current political environment is key, as is leveling with voters about your true beliefs. So is keeping one’s cool in the hot glare of public scrutiny, especially given all the stump speeches, town halls, political debates and interviews with journalists that will come between now and the day Nevadans go to the polls next year to decide Heller’s political fate.