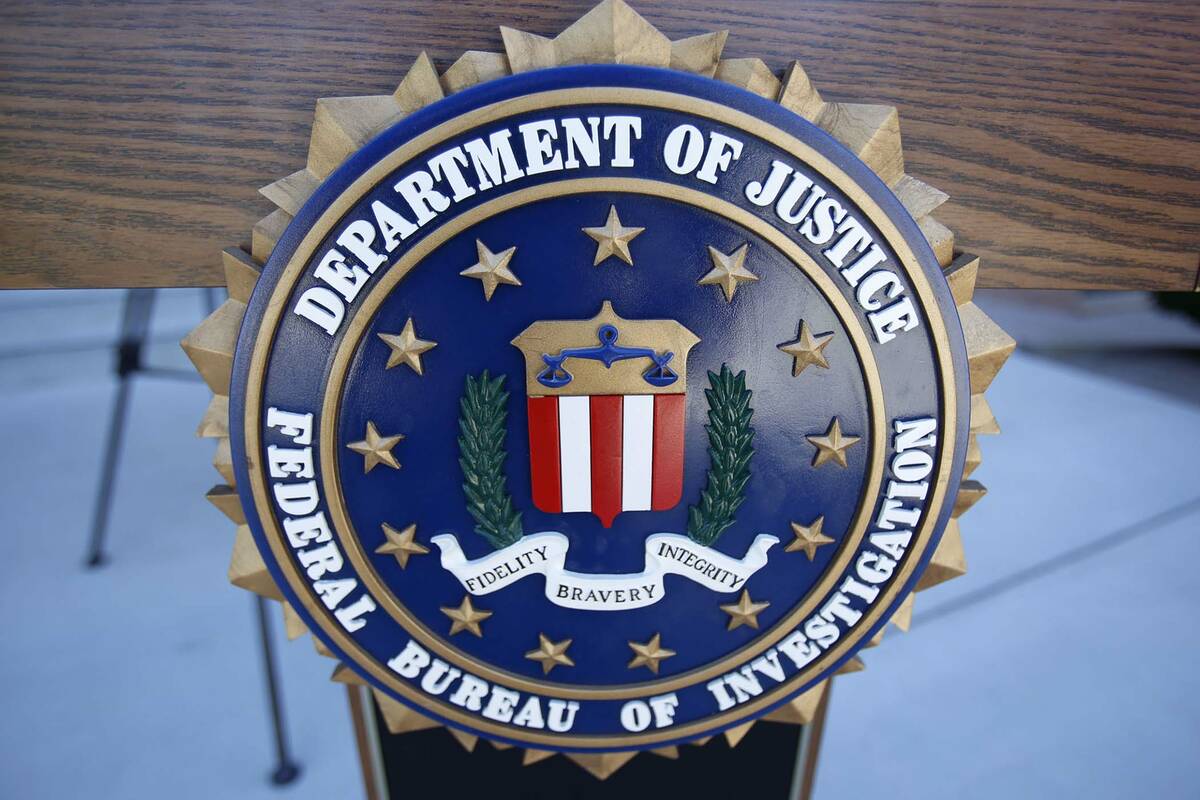 An FBI podium is shown during a press conference outside the main entrance of City Hall in Boulder City, Nevada on Friday, Sept. 16, 2016. Richard Brian/Las Vegas Review-Journal Follow

Did someone or something seize control of the United States?

What happened to the U.S. border? Where did it go? Who erased it? Why and how did 5 million people enter our country illegally? Did Congress secretly repeal our immigration laws? Did President Joe Biden issue an executive order allowing foreign nationals to walk across the border and reside in the United States as they pleased?

Since when did money not have to be paid back? Who insisted that the more dollars the federal government printed, the more prosperity would follow? When did America embrace zero interest? Why do we believe $30 trillion in debt is no big deal?

When did clean-burning, cheap and abundant natural gas become the equivalent to dirty coal? How did prized natural gas that had granted America’s wishes of energy self-sufficiency, reduced pollution and inexpensive electricity become almost overnight a pariah fuel whose extraction was a war against nature? Which lawmakers, which laws, which votes of the people declared natural gas development and pipelines near criminal?

Was it not against federal law to swarm the homes of Supreme Court justices, to picket and to intimidate their households in efforts to affect their rulings? How then with impunity did bullies surround the homes of Justices Brett Kavanaugh, Samuel Alito, Amy Coney Barrett, Neil Gorsuch, John Roberts and Clarence Thomas — furious over a court decision on abortion? How could these mobs so easily throng our justices’ homes?

Since when did Americans create a government Ministry of Truth? And on whose orders did the FBI contract private news organizations to censor stories it did not like and writers whom it feared?

How did we wake up one morning to new customs of impeaching a president over a phone call? Of the speaker of the House tearing up the State of the Union address on national television? Of barring congressional members from serving on their assigned congressional committees?

Was some state or federal law passed that allowed biological males to compete in female sports? Did Congress enact such a law? Did the Supreme Court guarantee that biological male students could shower in gym locker rooms with biological women? Were women ever asked to redefine the very sports they had championed?

When did the government pass a law depriving Americans of their freedom during a pandemic? In America can health officials simply cancel rental contracts or declare loan payments in suspension? How could it become illegal for mom-and-pop stores to sell flowers or shoes during a quarantine but not so for Walmart or Target?

Since when did the people decide that 70 percent of voters would not cast their ballots on Election Day? Was this revolutionary change the subject of a national debate, a heated congressional session or the votes of dozens of state legislatures?

What happened to election night returns? Did the fact that Americans created more electronic ballots and computerized tallies make it take so much longer to tabulate the votes?

When did the nation abruptly decide that theft is not a crime, assault not a felony? How can thieves walk out with bags of stolen goods, without the wrath of angry shoppers, much less fear of the law?

Was there ever a national debate about the terrified flight from Afghanistan? Who planned it and why?

What happened to the once trusted FBI? Why almost overnight did its directors decide to mislead Congress, to deceive judges with concocted tales from fake dossiers and with doctored writs? Did Congress pass a law that our federal leaders in the FBI or CIA could lie with impunity under oath?

Who redefined our military and with whose consent? Who proclaimed that our chairman of the Joint Chiefs of Staff could call his Chinese communist counterpart to warn him that America’s president was supposedly unstable? Was it always true that retired generals routinely libeled their commander-in-chief as a near Nazi, a Mussolini, an adherent of the tools of Auschwitz?

Were Americans ever asked whether their universities could discriminate against their sons and daughters based on their race? How did it become physically dangerous to speak the truth on a campus? Whose idea was it to reboot racial segregation and bias as “theme houses,” “safe spaces” and “diversity”? How did that happen in America?

How did a virus cancel the Constitution? Did the lockdowns rob of us of our sanity? Or was it the woke hysteria that ignited our collective madness?