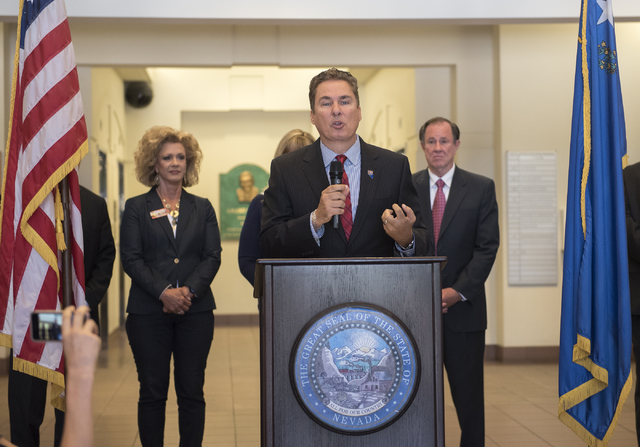 Nevada lawmakers shouldn’t have passed the largest tax increase in state history in 2015. Education Savings Accounts should have been funded during a 2016 special session. Colleges should have campus carry.

Those are three differences Republican lieutenant governor candidate Brent Jones says he has with his primary opponent Sen. Michael Roberson, R-Henderson. Jones served in the Assembly from 2015-16.

“Why do we have to keep taxing?” said Jones while filming Nevada Politics Today. “Roberson actually was a [no new taxes] pledge signer. Then when he got in the club, so to speak, he began pushing this tax. As Republicans, our whole platform was we want limited government and lower taxes.

“Why do we violate what we actually say? It’s called integrity.”

Jones pushed back on the notion that additional money is what is needed to improve education. He noted that inflated-adjusted, per-pupil spending has more than doubled since the 1980s.

“The issue is not more money,” Jones said. “It’s a broken system.”

Jones also blasted Roberson for not allowing a vote on funding ESAs during the 2016 special session that gave $750 million to the NFL’s Raiders. Republicans had a majority in both houses, which they lost weeks later in the November elections. Roberson was Senate majority leader at the time.

“We were begging for it, and Roberson wouldn’t allow it,” Jones said.

Even with last weekend’s gun protests, Jones doesn’t think Nevada needs more restrictions on gun ownership, although he was ambivalent on a bump stock ban.

“I don’t think we need any more gun control,” he said. “I think Benjamin Franklin said it best, ‘A government that cannot trust its people with guns should not be trusted.’ ”

Jones said many mass shooters were found to be on psychotropic drugs. He argued those taking such medications need to be monitored better. He blasted Roberson for killing a bill that would have allowed students to carry concealed firearms on college campuses.

“When honest people don’t have guns, they can’t protect themselves,” he said.

“We should not be a sanctuary state,” he said. “Sen. Roberson pushed through SB303, which gave illegals licenses. Illegal alien means you’re doing something illegal. Why are we sanctioning illegal activity?

“I wish I didn’t have to pay taxes, but you know what? I do, because I follow the law.”

Jones pushed back against a lawsuit filed by a former employee during the heat of his 2016 primary campaign. The woman accused Jones’ business of making her watch Scientology videos. He pulled out a deposition from the woman in which she said she never spoke to Jones about Scientology. The lawsuit is still pending.

“You have religious freedom in our company,” he said. “The video she was talking about, that she actually put in the pleadings, was The Secret.

“The Secret has nothing to do with Scientology.

Jones said he would support the winner of the Republican primary.