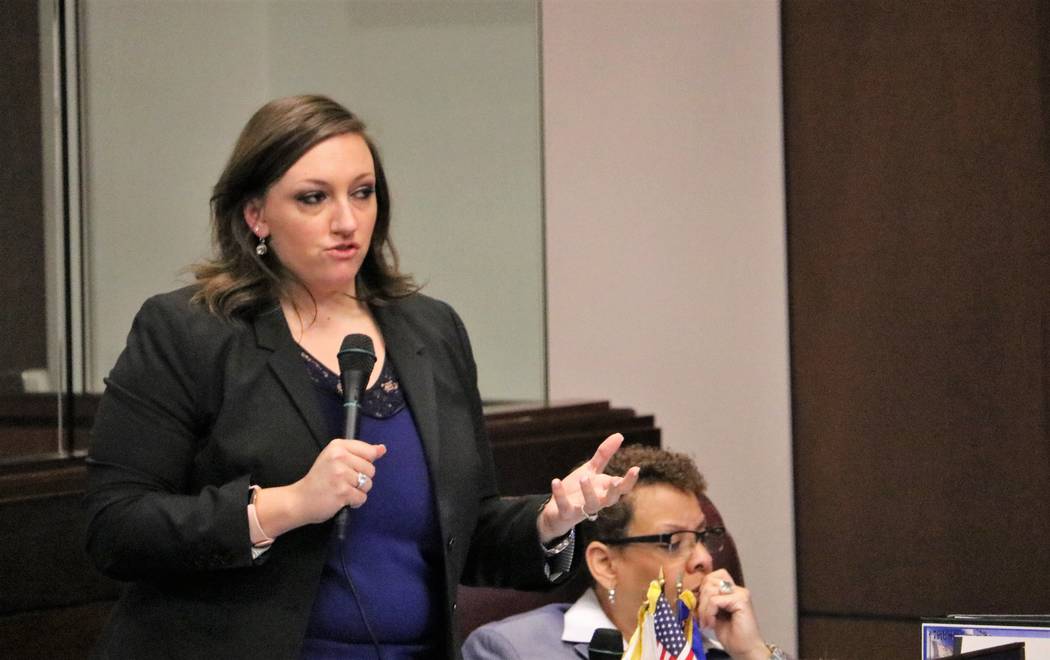 Sen. Nicole Cannizzaro, D-Las Vegas, speaks in support of Initiative Petition 1, which would automatically register anyone getting a Driverճ License at the DMV, while on the Senate Floor, March 13, 2017. (Victor Joecks/Las Vegas Review-Journal) @victorjoecks

For decades, some Nevada politicians have tried to establish annual legislative sessions. The latest effort, Senate Joint Resolution 5, is scheduled for a hearing on Wednesday afternoon. Nevada’s constitution limits the Legislature to a single 120-day regular session every two years. Nevada, Texas, Montana and North Dakota are the four states with biennial legislative sessions.

That’s not the only thing the constitution limits. It says politicians can receive pay for only the first 60 days of a regular session. They currently make around $150 a day. Over 60 days, that’s $9,000. They also collect $142 in per diem throughout the whole session. Most politicians have to pay for lodging in Carson City and travel expenses, which means they can’t just pocket that money. The combined total tops $26,000 for four months.

Most legislators don’t like working and not getting paid, which is understandable. But it’s politically dangerous to advocate paying yourself more.

Under the guise of creating annual session, SJR5 would do exactly that. The proposed constitutional amendment would create a 90-day legislative session each odd-numbered year and a 60-day session every even-numbered year. It would also eliminate the constitutional prohibition on paying legislators for more than 60 days during a regular session.

If passed, the Legislature would go from meeting 120 days to 150 days every two years. Politicians, however, would go from being paid for 60 days to 150 days every two years. That would be a 150 percent pay hike. It could be even more. The amendment says legislators shall receive compensation “at regular intervals determined by law.” As a constitutional amendment, SJR5 would have to pass the Legislature this session and in 2021. Voters would get the final say in 2022.

SJR5 isn’t a fringe effort, either. It’s sponsored by 10 of the 13 members of the Senate Democratic caucus. Many of those senators are in safe districts, but not all of them. Majority Leader Nicole Cannizzaro, D-Las Vegas, is a sponsor and up for election next year. It’s going to be hard to beat the sitting majority leader, but she’s handed her GOP opponent a potent political attack. She won by just 2 percentage points in 2016. Sen. Marilyn Dondero Loop, D-Las Vegas, who won by 3 percent last year, is also a co-sponsor. Republicans should bring this issue up if she runs for re-election in 2022.

That’s not to say Republican lawmakers haven’t been interested in padding their salaries. In 2015, Republican legislators pushed for a constitutional amendment to have an independent commission set legislative pay. It passed in 2015 before dying in 2017.

If legislators don’t want to work without pay, there’s already a solution available. Cut back on the number of bills each lawmaker can propose, finish the work in 60 days and adjourn.