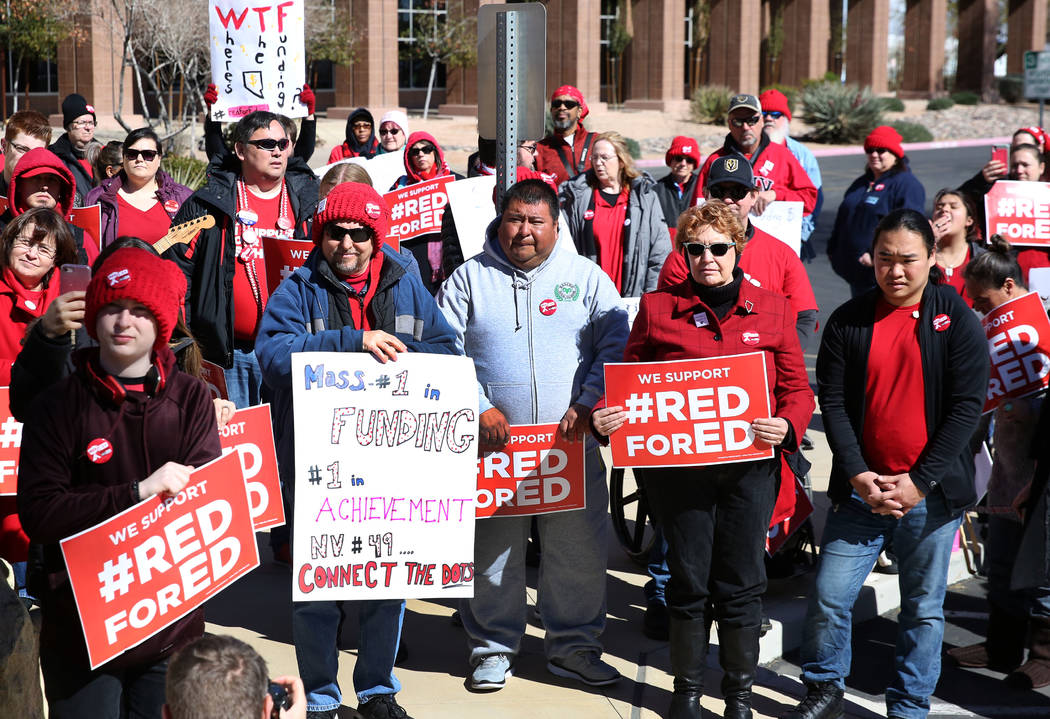 Parents and educators hold signs as they demonstrate their support for the ''Red for Ed'' movement outside of the Grant Sawyer Building on Monday, Feb. 18, 2019, in Las Vegas. Educators dressed in red have protested across the country to demand more for their students. (Bizuayehu Tesfaye/Las Vegas Review-Journal) @bizutesfaye 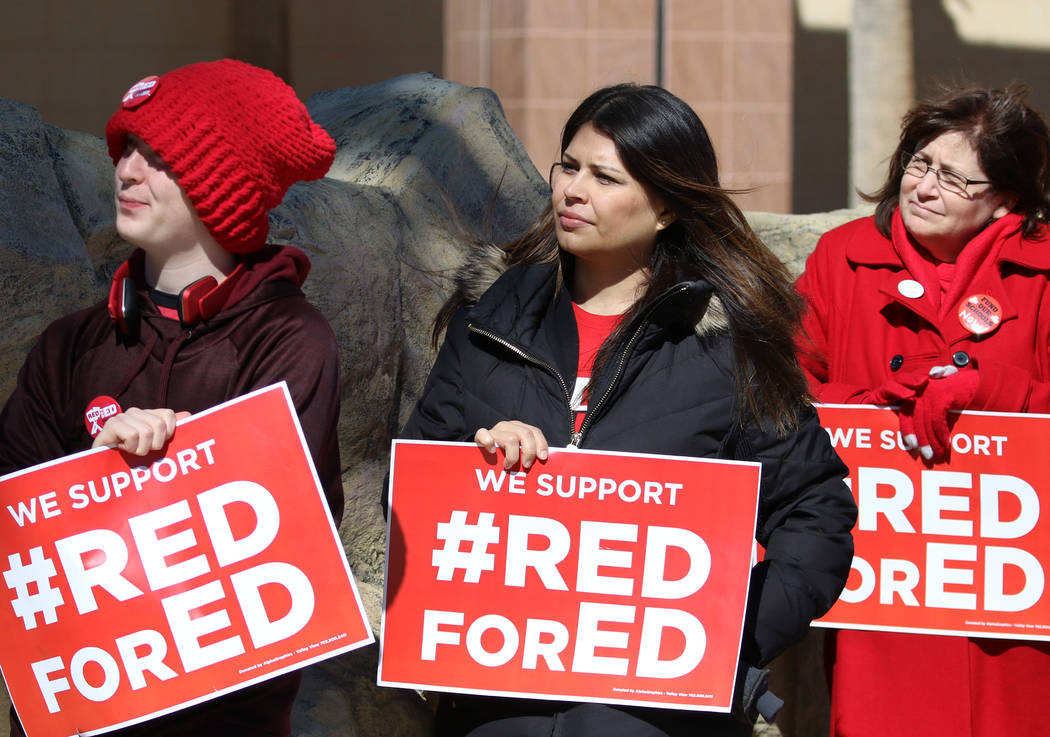 Alec Miller, left, Alicia Norman and Jana Pleggenkuhle, right, hold signs as they demonstrate their support for the ''Red for Ed'' movement outside of the Grant Sawyer Building on Monday, Feb. 18, 2019, in Las Vegas. Educators dressed in red have protested across the country to demand more for their students. (Bizuayehu Tesfaye/Las Vegas Review-Journal) @bizutesfaye 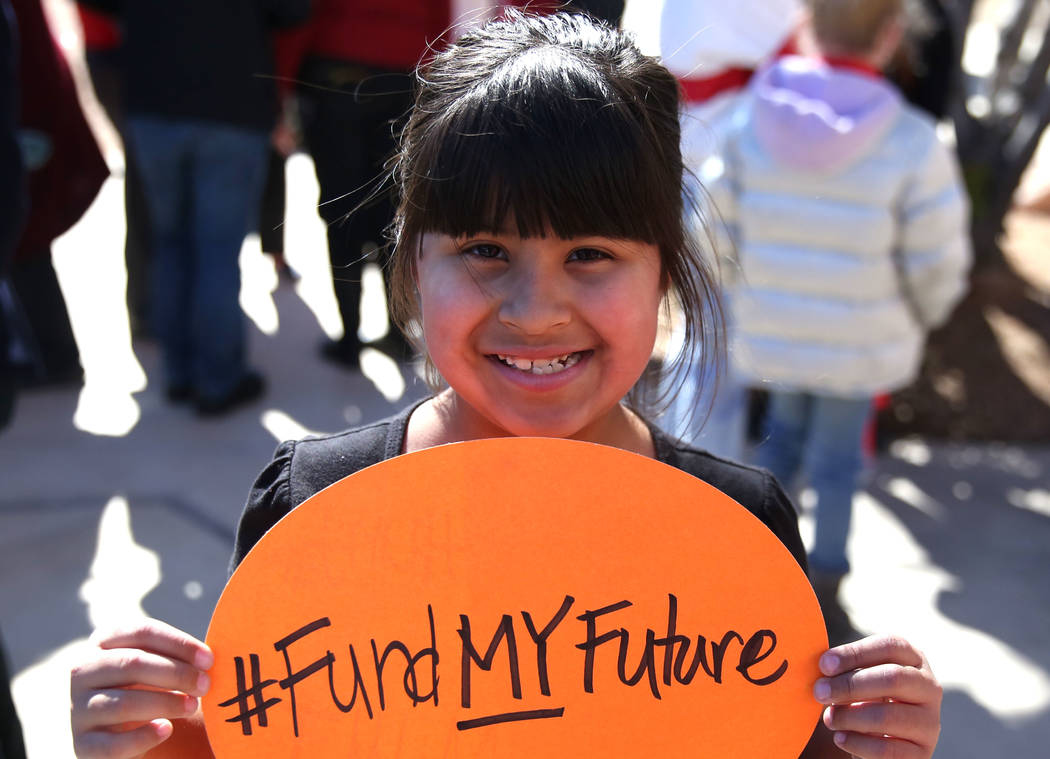 Lucy Garcia, 7, a student at Sandy Searles Miller Academy, shows off her sign as she demonstrates her support for the ''Red for Ed'' movement outside of the Grant Sawyer Building on Monday, Feb. 18, 2019, in Las Vegas. Educators dressed in red have protested across the country to demand more for their students. (Bizuayehu Tesfaye/Las Vegas Review-Journal) @bizutesfaye

It’s a lot harder to attack your legislative allies than your enemies. Just ask the Nevada State Education Association.

The NSEA wants a massive tax increase, but it’s not in Gov. Steve Sisolak’s budget. His plan for teachers includes 2 percent yearly raises and a one-time 3 percent salary boost. Actual raises may vary because the state gives money to school districts, which negotiate raises through collective bargaining. But the NSEA is far from satisfied.

In written testimony, the union warns that Sisolak’s proposed budget “could mean layoffs, reductions in services and even larger class sizes. Employee bargaining units have already heard from school districts that they are going to have difficulty delivering on the 3 percent raises promised in the governor’s budget due to the issue of base funding.”

Ignore the futility of trying to fix a broken system by dumping money into it. Leave aside that Nevada passed the largest tax hike in state history four years ago, specifically to boost education spending.

If union leaders really believe this, it foreshadows a full-blown crisis that Democrat legislative majorities must fix.

That was the message the NSEA intended to send at its “Red for Ed” rally Monday in Carson City. The “Red for Ed” theme comes from teacher strikes in West Virginia, Oklahoma and Arizona that led to pay increases. In Oklahoma, teachers kept striking even after receiving a 15 percent pay increase. Arizona teachers weren’t satisfied with receiving 20 percent pay hikes by 2020.

You’d expect that the dozens of people attending the NSEA’s rally would have attacked Democrats for not proposing tax hikes. You’d be wrong. Several powerful Democrats spoke at the rally and received cheers despite the fact that they never called for new revenue.

“It’s unfair that you haven’t been given all the resources that you need and deserve,” Assembly Education Chair Tyrone Thompson, D-North Las Vegas, said. “Totally unfair. We have an outdated funding formula that undercuts our local schools.”

This is a Democratic bait and switch. The implication of revising the funding formula is that school districts and teachers will receive substantially more money. But it will only rearrange who gets existing dollars. The vast majority of funds already goes to the Clark and Washoe county school districts because they have the most students. For instance, Nevada’s five smallest counties had barely 2,000 students combined last school year. Several Clark County high schools have more than 3,000 students each. In 2016, those five districts received $14.7 million in state funding. That would barely be a rounding error in the CCSD’s budget.

The NSEA wants lawmakers to have the “courage” to raise taxes. But so far, its leaders haven’t even found the courage to criticize Democrats unwilling to fund their priorities.