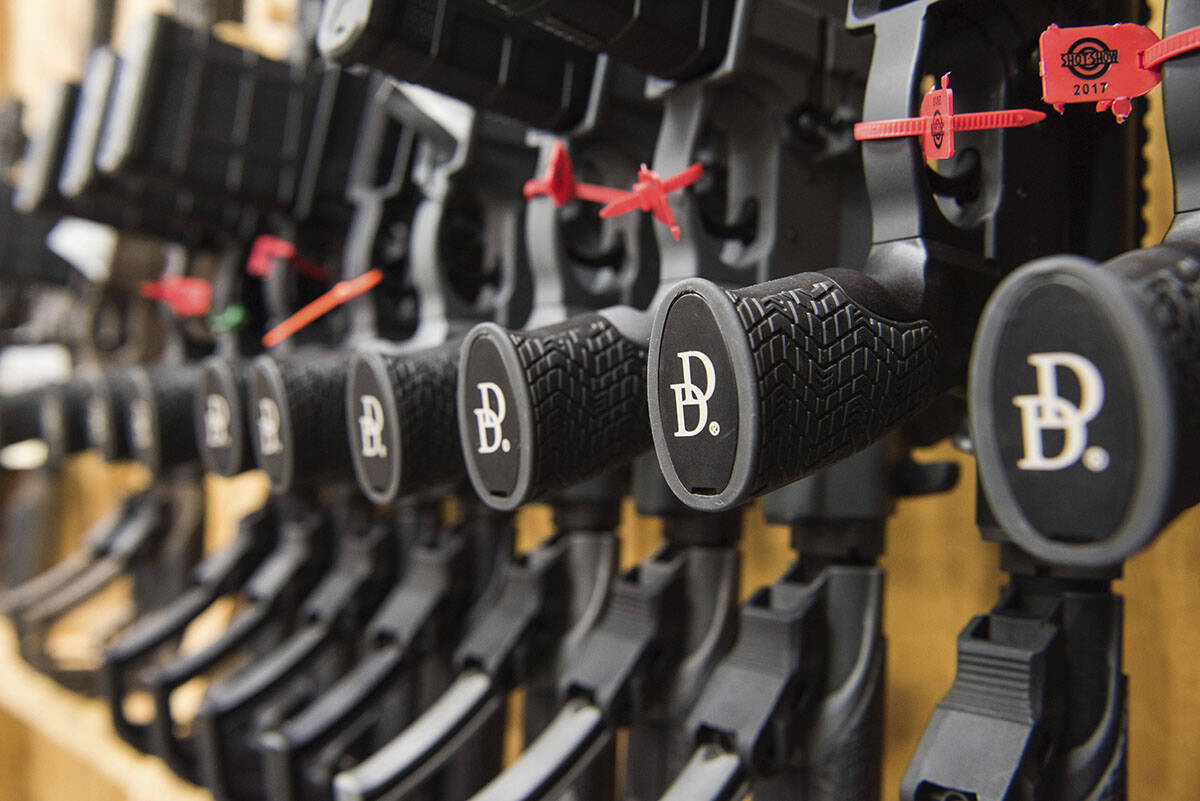 A row of AR-15 style rifles manufactured by Daniel Defense sit in a vault at the company's headquarters in Black Creek, Ga. (Lisa Marie Pane/AP)

It’s hard to solve a problem when someone willingly or unwillingly misstates basic facts. But that’s what happens when the national discourse turns to firearms, which it has after the tragic Texas school shooting.

Here are four common assertions about guns that are factually wrong:

Myth 1: It’s easier to buy a gun than allergy medicine.

To buy Sudafed, you must show photo ID and the retailer keeps your personal information for at least two years.

To buy a firearm from a federally licensed firearms dealer, you must fill out a federal form and present photo ID. The dealer will then run a background check on you. In Nevada, that will cost you $25. The background check may come through right away or you may have to return three days later. If you are a prohibited purchaser, you will likely not be able to purchase the weapon.

Myth 2: “These kinds of mass shootings never happen with the kind of frequency that they happen in America,” President Joe Biden recently asserted.

A 2020 paper by John Lott, president of the Crime Prevention Research Center, looked at mass shootings around the world. He found that the United States “ranks 66th in the per capita frequency of these attacks and 56th in the murder rate.”

The reported cowardice of officers in Uvalde or at least their leadership gave this argument new life. But recall how the shooting ended. Law enforcement officers entered the classroom and killed the shooter with a firearm. The problem was that the good guys with guns didn’t act sooner.

There are cases when a good guy or gal does act immediately, likely with life-saving consequences. The day after the Texas shooting, a man in West Virginia started shooting at a graduation party with an AR-15-type weapon. A woman shot and killed him with her pistol and police credited her with saving several lives.

Myth 4: An assault weapons ban is the solution to gun violence.

Set aside for a moment that the phrase “assault weapon” is an amorphous term. Assume leftists want to ban all rifles. Ignore the reality that Americans own tens of millions of rifles and that those guns would remain in circulation. Would a ban on rifles solve gun violence?

Hardly. For one, the majority of firearm deaths in this country are suicides. Yes, gun control activists include those when stating there around 40,000 gun deaths a year.

Next, FBI data shows there were 13,700 firearm murders in 2020. Handguns accounted for more than 91 percent of the killings where the type of firearm was known. For rifles, it was 5.2 percent. There were also more than twice as many murders committed with knives than with rifles.

These facts explain why gun rights groups are so wary of new gun control restrictions. What Democrats are proposing won’t solve the problem they claim demands immediate “action.” That means there will be another horrific shooting. They will then demand more laws that won’t prevent another mass shooting. Those restrictions, however, will chip away at the rights of law-abiding gun owners.

Interestingly, the FBI reported 10,600 firearm murders in 2019. If activists want to prevent 3,000 gun murders annually, they should ban “defund the police” rhetoric.