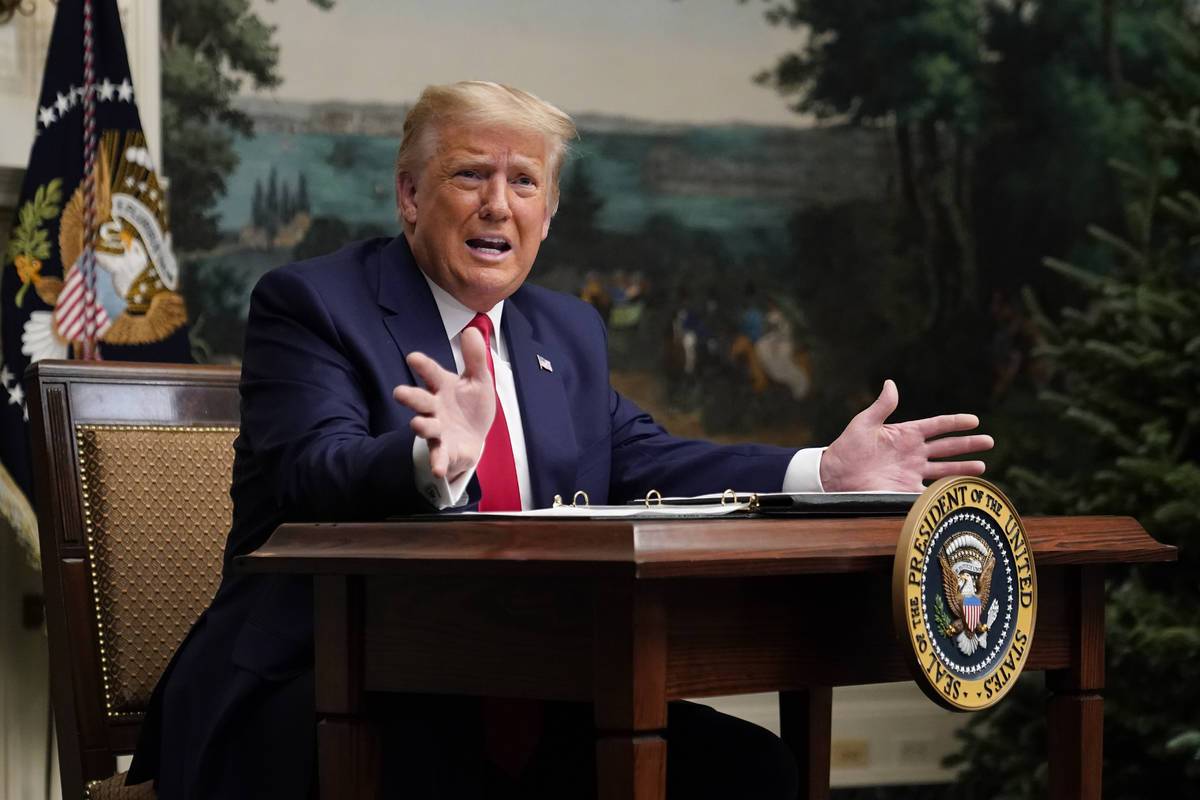 President Donald Trump speaks with reporters after participating in a video teleconference call with members of the military on Thanksgiving, Thursday, Nov. 26, 2020, at the White House in Washington. (AP Photo/Patrick Semansky)

The Trump campaign still claims widespread voter fraud in Nevada. Here’s its strategy to back up the allegations.

On Thursday, the District Court in Carson City will hear the campaign challenge to November’s Nevada results. The Trump campaign had the opportunity to subpoena witnesses and collect evidence.

Testimony under oath could provide evidence for some of the charges laid out in the campaign’s court filings. That includes an allegation that election workers in Clark County were pressured to overlook “irregularities.” That includes a direction to count a signature as matching “so long as at least one letter” looked the same.

Under oath, Clark County registrar Joe Gloria could clear up a lot. You’d think he’d be eager to defend his department. But Trump campaign officials said Clark County employees locked their doors to prevent Gloria from being served with a subpoena last Wednesday. Gloria then refused to leave his house over the weekend. As of Tuesday afternoon, it’s unclear whether Gloria will be deposed or not.

Here’s another explosive allegation where subpoenaing witnesses would help uncover the truth. The suit claims postal carriers “were directed to violate the USPS policy by delivering mail-in ballots” to bad addresses. That could include someone who died or moved.

Postal officials are unlikely to broadcast that they did this. Under oath, it’s a different story. Perhaps that’s why, as of this writing, Trump campaign officials said the post office is stonewalling its attempt to depose a postal official.

The campaign could identify illegal votes using a database that shows people who’ve moved out of Nevada or died recently. Cross-referencing those lists with Nevada’s voter rolls would produce a list of potentially problematic ballots. The challenge is that any list created this way is unlikely to be 100 percent accurate. In a large group, there are likely to be legitimate exceptions. Those outliers, however, aren’t sufficient reason to dismiss the entire list.

Let’s be clear on what’s not going to happen. A court victory in Nevada isn’t going to give President Donald Trump a second term. Even if the Trump camp presents strong evidence of irregularities in these areas, it will likely have to rely on concerns about Clark County’s signature verification machine to overcome his 33,000-plus vote deficit to Joe Biden. That’s a tall order because many of those signatures were certainly valid.

The efforts of a campaign shouldn’t replace much-needed investigations by state and federal officials either. But Thursday’s hearing is a chance to see what the Trump campaign has actually uncovered about Nevada’s election security — or lack thereof.