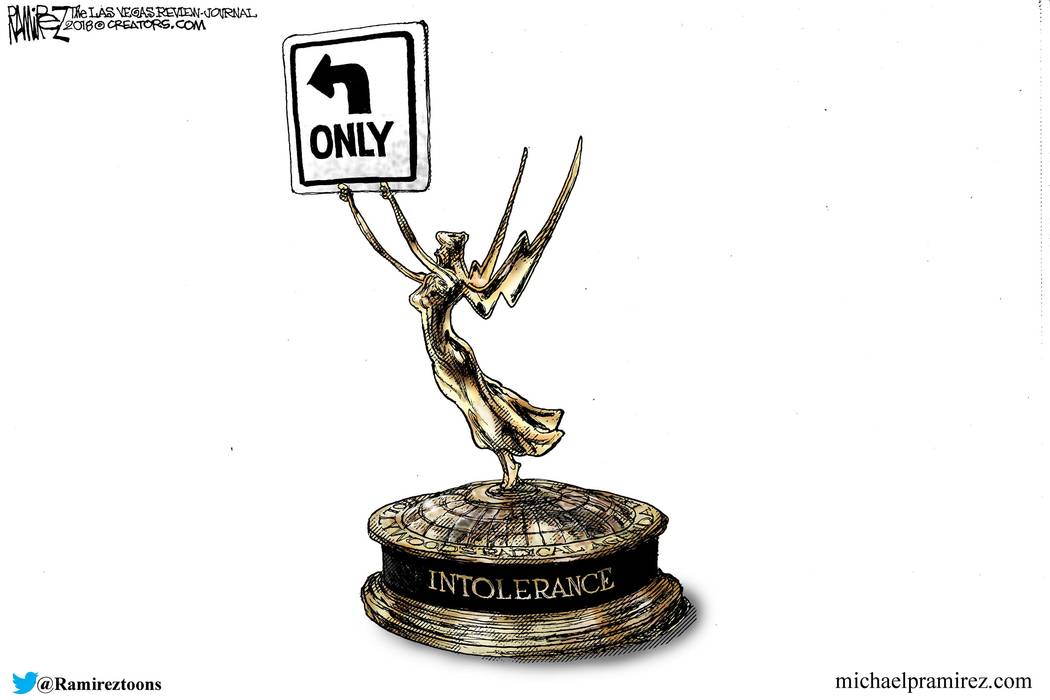 And for Best "preening, self-righteous, sanctimonious, hypocritical celebrity" Actor pretending to be tolerant ...

Political leftists are making it clear they don’t just want to win elections. They want to intimidate, threaten and banish from polite society anyone who voices even a single traditionally conservative value.

It’s important to differentiate between liberals and leftists. Liberals want a larger government and respect their political opponents’ First Amendment rights. Think of someone you know where a political disagreement might cause a heated discussion but doesn’t threaten a friendship.

Leftists want more government, too. They also approve of using governmental power, physical force or social media mobs against those who stray from the politically correct orthodoxy.

This is what happened in San Francisco last week. On Tuesday, its Board of Supervisors passed a resolution labeling the NRA a “domestic terrorist organization.” The resolution was based on outright lies.

“The National Rifle Association musters its considerable wealth and organizational strength to promote gun ownership and incite gun owners to acts of violence,” it read.

Tellingly, there were no examples provided. That’s because there aren’t any. The NRA doesn’t encourage its members to commit violence. Just the opposite. In November 2017, a lowlife scumbag killed 26 people in a Texas church. Hearing the gunshots, NRA instructor Stephen Willeford grabbed his AR-15-style rifle and went out to engage and eventually wound the killer. Willeford is a hero who risked his own life to stop further bloodshed. San Francisco leftists just branded him a terrorist.

If only Willeford had been an illegal alien, like the killer of Kate Steinle, San Francisco would have welcomed him with open arms.

The NRA’s real “crime” is its political success in stopping gun control legislation. Instead of trying to defeat the NRA politically, San Francisco wants to remove it — and the millions of people it represents — from the conversation. That’s not an appropriate response to someone disagreeing with your reading of the Second Amendment.

Unfortunately, this wasn’t an isolated incident.

President Donald Trump is going to a Beverly Hills fundraiser later this month. Actor Eric McCormack responded to the news with this tweet, “Kindly report on everyone attending this event, so the rest of us can be clear about who we don’t wanna work with. Thx.”

Late last month, NFL Saints quarterback Drew Brees encouraged students to participate in “Bring your Bible to school day,” which is Oct. 3. He filmed a brief video promoting the event for Focus on the Family, a Christian organization. Like Christians have done for millennium, the group believes that sex outside of a heterosexual marriage is sinful.

“Drew Brees supported the bigots at Focus on the Family,” a headline at Fatherly read.

Here’s a different idea. If you don’t like the Biblical teaching on marriage and sexuality, don’t go to church. Change the channel. That’s the beauty of a free county.

But as these examples show, leftists don’t just want freedom for themselves. They’re actively trying to shut down and shut up those who disagree with them.

3
$204K jackpot hits for Arizona visitor on the Strip

4
Sands sells The Venetian, Palazzo, Sands Expo for $6.25B