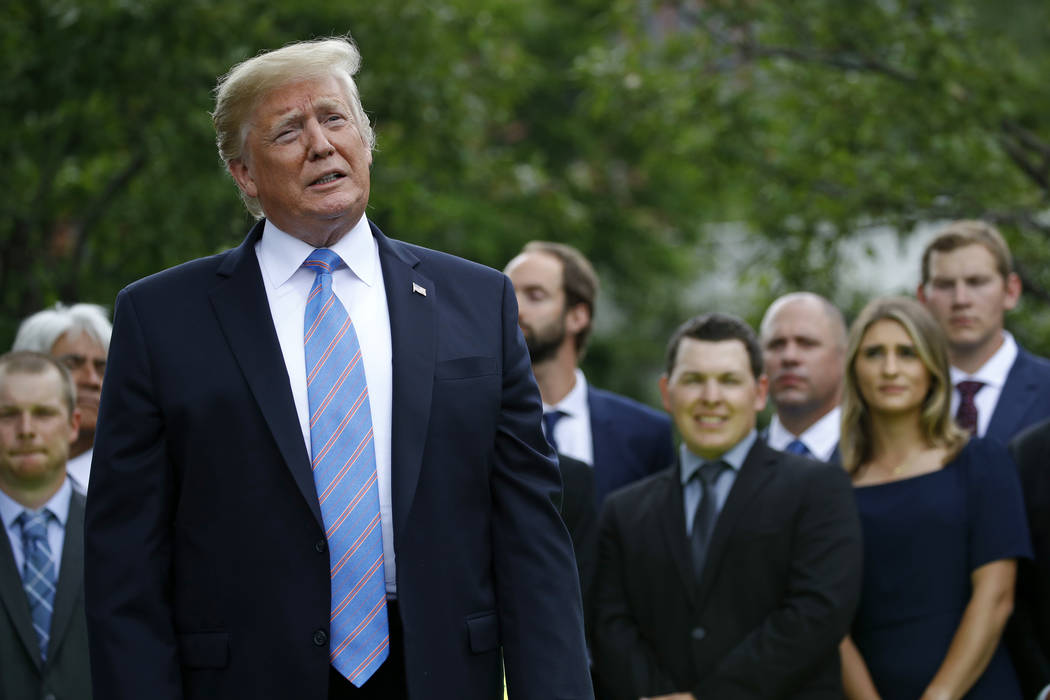 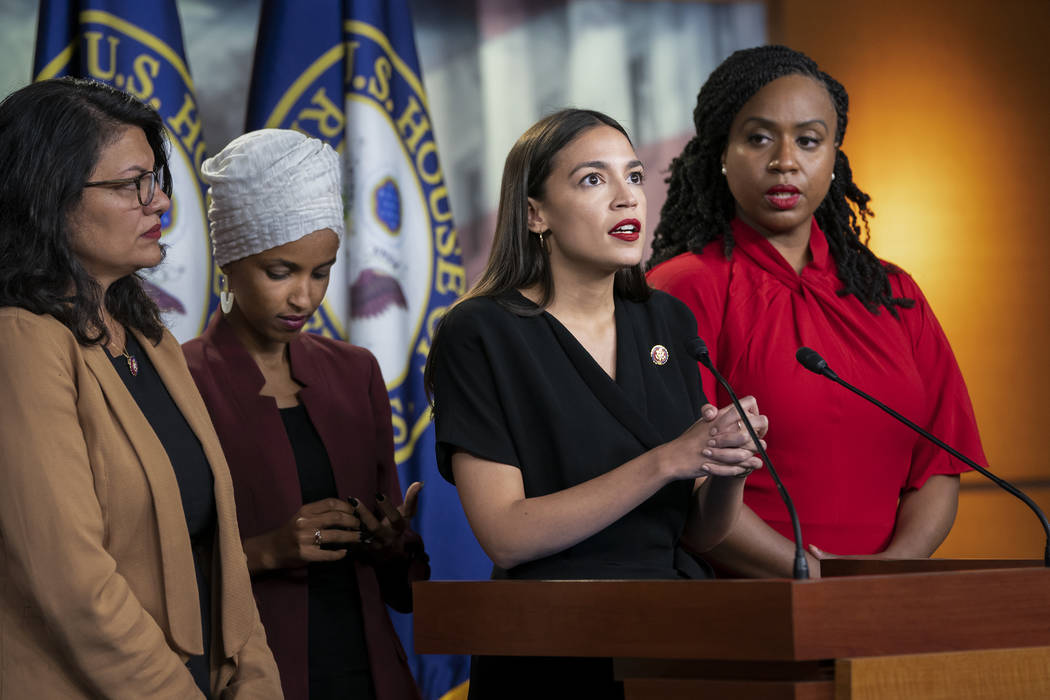 From left, Rep. Rashida Tlaib, D-Mich., Rep. llhan Omar, D-Minn., Rep. Alexandria Ocasio-Cortez, D-N.Y., and Rep. Ayanna Pressley, D-Mass., respond to remarks by President Donald Trump after his call for the four Democratic congresswomen to go back to their "broken" countries, during a news conference at the Capitol in Washington, Monday, July 15, 2019. All are American citizens and three of the four were born in the U.S. (AP Photo/J. Scott Applewhite)

He neutralized Jeb Bush’s tenure as Florida governor by branding him “low energy.” Sen. Marco Rubio was the rhetorically gifted rising star, except it was hard to see stirring oration coming from “Little Marco.” Trump undercut Sen. Ted Cruz’s theme that conservatives could trust him with the “Lyin’ Ted” label.

If only President Trump could see that one of his greatest strengths — his ability to shape national narratives — is also a great weakness.

Last week, congressional Democrats were in the midst of an ugly and increasingly public civil war. Freshman Rep. Alexandria Ocasio-Cortez had not so subtly implied that Speaker Nancy Pelosi was a racist after Pelosi had dismissed AOC’s influence. Pelosi said AOC’s reach was limited to her “squad” of Reps. Rashida Tlaib, Ilhan Omar and Ayanna Pressley.

Then the official House Democrats Twitter account accused AOC’s chief of staff of “singling out a Native American woman of color.” Pressley then leveled this attack, “We don’t need black faces that don’t want to be a black voice.” Her comments appeared directed at the Congressional Black Caucus, which had sided with Pelosi.

When your political opponents are rhetorically clubbing each other to death, you stand back, shut up and get out of the way.

Unless you’re Trump, who — blinded by his own genius at shaping political stories — decided this was a great time to criticize AOC and her squad.

“So interesting to see ‘Progressive’ Democrat Congresswomen, who originally came from countries whose governments are a complete and total catastrophe … now loudly and viciously telling the people of the United States … how our government is to be run,” Trump tweeted Sunday. “Why don’t they go back and help fix the totally broken and crime-infested places from which they came.”

This was wrong on several levels. It’s insulting and dismissive to citizens who came to the United States as immigrants. We should evaluate people’s ideas on their merits, not tell someone their birthplace makes their ideas unacceptable. With her proposal to ban both air travel and farting cows, AOC has made it easy to discredit her ideas. Her birthplace has nothing to do with it.

That was another Trump mistake. Only Omar is an immigrant. AOC, Tlaib and Pressley were born in the United States.

Democrats and the mainstream media rushed to claim this was fresh evidence of Trump’s racism. Drawing that conclusion relies on the same logic — any criticism of a minority is rooted in racial bias — that AOC used to tar Pelosi. Trump has provided years of evidence that he isn’t great with details and is an equal opportunity insulter. Just three tweets before this one, Trump implied former House speaker and fellow Republican Paul Ryan was “weak, ineffective and stupid.”

The president also made a political misstep. Democrats went from fighting each other to attacking him.

Trump is a genius at generating publicity. That’s not always a good thing.