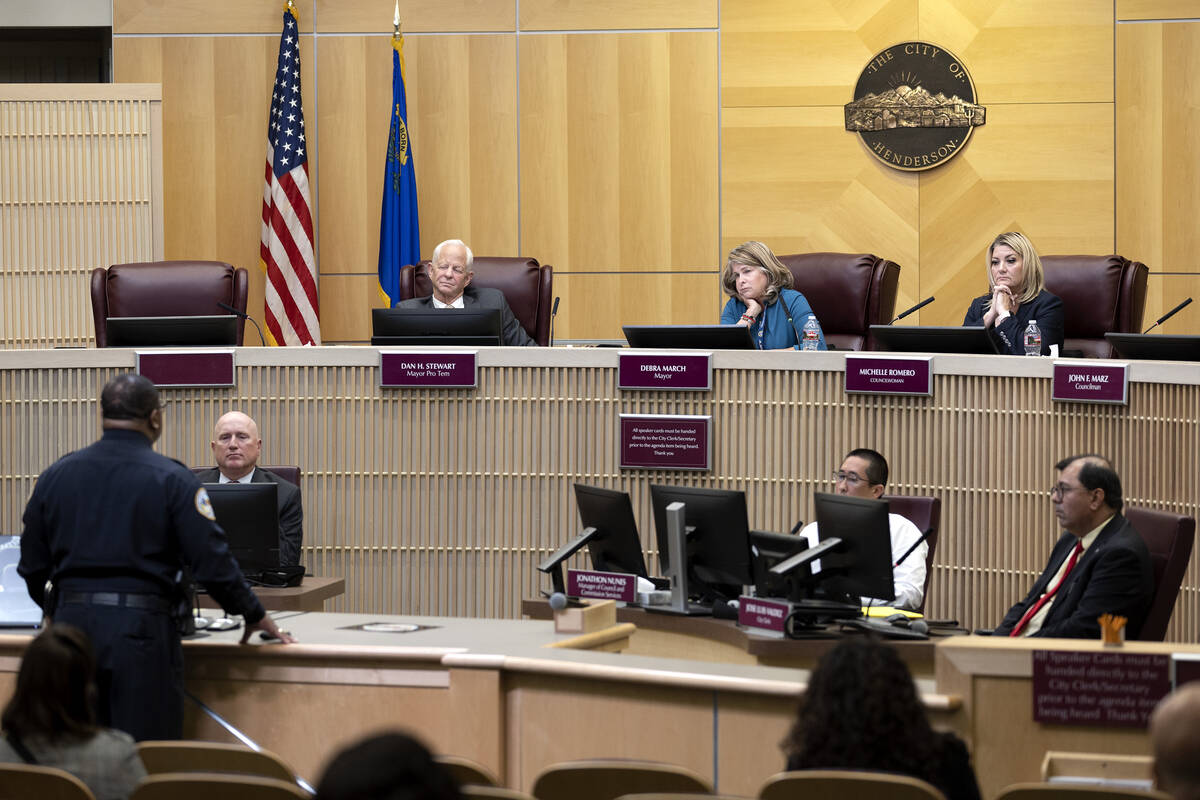 Henderson Chief of Police Thedrick Andres speaks during a city council hearing at Henderson City Hall on Tuesday, Nov. 15, 2022, in Henderson. Local police unions presented their vote of no confidence on Andres during the hearing. (Ellen Schmidt/Las Vegas Review-Journal) @ellenschmidttt

Parting ways with its police chief isn’t a cure-all, but it could go a long way toward fixing the problems facing the Henderson Police Department. It all depends on the replacement.

Henderson Police Chief Thedrick Andres is out. He officially announced his retirement Thursday. But as I reported Wednesday, he’s being forced out.

It’s a much-needed change. As readers of this column know, crime is surging in Henderson. Instead of leveling with the public, Andres asserted Henderson was “one of the safest largest cities in America.” The city used cherry-picked stats to claim crime was trending down. Residents knew better.

So did the Henderson police officers. While crime increases have many factors, police officers believed Andres was one of the problems. Last November, two Henderson police unions told the City Council that Andres received a “no confidence” vote from more than 95 percent of its members who voted. They were worried about his manipulation of promotion lists, a hostile work environment and his new use-of-force policy. Then-Mayor Debra March, however, reaffirmed the city’s support for him and his reforms.

But elections have consequences. The city has new leadership. March is out. Michelle Romero is the new mayor. In an interview, she said, “We have the best police force in the country.” Not the words of someone seeking to overhaul the department. Backed by police, Councilwoman Carrie Cox won a hard-fought race. Andres didn’t have the support from the council that he had previously. Now he’s done.

It’s not enough just to replace Andres, however. The city needs a new chief who rejects woke-ism and has the trust of the city’s officers. That’s to be determined. The city’s Senior Public Information Officer Kathleen Richards said, “We have not yet determined the process that will be used for selecting his replacement.” Officially, City Manager Richard Derrick makes the decision.

One of the potential contenders is Deputy Chief Michael Blow. Jeff Crampton, a civilian board member of the Henderson Police Officers’ Association, thinks officers would view that as more of the same. Why get rid of Andres if you replace him with his right-hand man?

Crampton believes there are several internal candidates who would like to be considered. One is likely to be Henderson Police Capt. Hollie Chadwick. She’s a former UNLV softball player. After graduating, she coached and taught at another college. Then 9/11 happened. She left that profession to become a cop, joining the Henderson police and rising through the ranks. Impressive.

Officers “would be very confident in her ability to lead the department forward,” Crampton said. He also said her appointment “would be the bright light at the end of a very dark tunnel” for officers.

Selecting a chief who supports officers, instead of undermining them, would also go a long way toward resetting the relationship between the unions and city. Romero sounds eager for that. She said she wants “to make sure police officers have the environment they need to succeed.”

That starts with good leadership. Andres didn’t provide it. The city needs to put a chief in place who’s more interested in arresting criminals than putting new restrictions on police officers.