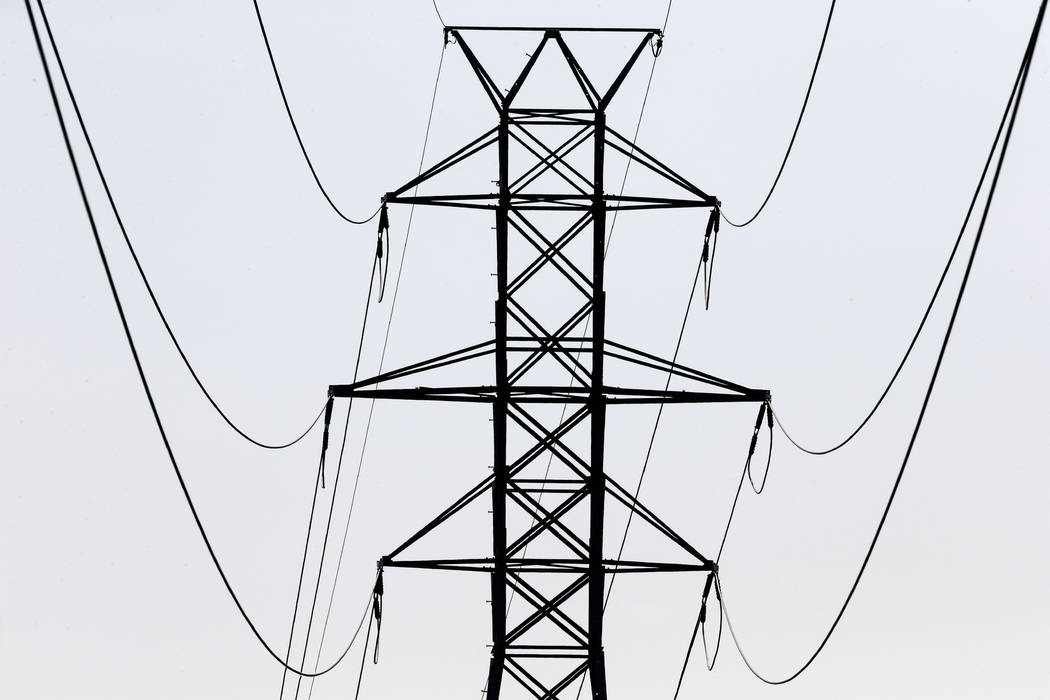 FILE- In this Aug. 14, 2018, file photo power transmission lines carry electricity along the Interstates 40 and I-85 corridor in Orange County near Hillsborough, N.C. Despite a strong economy, about 40 percent of American families struggled to meet one of their basic needs last year, according to a new study by the Urban Institute, a nonprofit research organization. That includes paying for food, health care, housing or utilities. (AP Photo/Gerry Broome, File)

Passing Question 3 will lead to lower electric rates, contends Jon Wellinghoff, the former chairman of the Federal Energy Regulatory Commission, who’s with the Yes on 3 campaign. He said that instead of comparing average power prices in places with deregulation, you should look at the lowest rates available. He also said the Public Utilities Commission of Nevada’s report on Question 3 missed important information.

Nevada Politics Today had extended a debate invitation to both sides of this ballot initiative in August. The Yes on 3 campaign agreed to a debate, but the No on 3 campaign refused to participate.

“If Question 3 passes, electric rates will go down,” said Wellinghoff while filming Nevada Politics Today. “We’ve done a study, done by a nationally recognized utility expert, who’s indicated very clearly that there are substantial tax savings in accumulated differed income taxes and additional savings in over earnings from the company that would come back to Nevada ratepayers to lower their rates. So No. 1, we already have a pot of money that we see will in fact lower rates. In addition to that, if you look at what competition has been doing in other states, the actual experience for example in Texas, we know that rates will be lowered.”

A No on 3 campaign commercial asserts that “in states that deregulated electricity, average rates are nearly 30 percent higher than Nevada’s.”

“Power prices are not higher” in places with deregulation, said Wellinghoff. He said that statistic depends on the use of the word “average.”

“By them picking averages, they’re picking the total of both very high rates in those states — because some rates provide flat rates over a very long period of time and the rates are obviously going to be higher – and also extremely low rates,” he said. “And that average comes out to some point that may be higher than what we’re paying in Nevada.

“Fortunately, if we have choice, we don’t have to pick the average rate or the highest rate in Nevada, as they do in Texas and other places, we can pick the lowest rate.”

Wellinghoff also noted that some deregulated states “started at a much higher price than Nevada already. So they were able to lower their rates considerably through competition.”

He also disputed a PUC report that predicted price increases under Question 3.

“The PUC did not even consider those tax effects,” Wellinghoff said. “They missed them entirely. Their staff missed those tax effects entirely in looking at what was going to happen to the rates in Nevada. So, yes, they’re wrong.”

Deregulation didn’t cause California’s infamous rolling blackouts in the early 2000s, he said.

“What happened in California was not a retail deregulation failure. It was a wholesale failure,” said Wellinghoff. It “won’t occur again” because FERC put protections “to ensure it won’t happen again and it hasn’t happened again.”

If Question 3 passes, Wellinghoff predicted that 10 to 20 retail providers would enter the Nevada market.