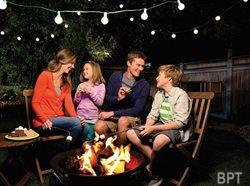 Gimme some more! A dozen fun facts about s'mores

(BPT) – With back to school just around the corner, now’s the time to make the most of the final days of summer. Gather your family and friends around the fire and enjoy a delicious treat. One of the quintessential flavors of summer, s’mores have been enhancing bonfires and bringing families together for decades. In fact, the first official recipe for s’mores was published in the 1927 Girl Scout Handbook, which launched the treat into pop culture and made a big impression on families across the United States.

Celebrate the classic Hershey’s S’mores by enjoying a bonfire and sharing memories of how this gooey treat has been enjoyed by your family over time. Test everyone with s’mores trivia and see who knows the most about this favorite campfire tradition:

1. In which state or region are s’mores consumed the most?
Answer: Grand Rapids, Michigan

2. When is National S’mores Day?
Answer: National S’mores Day is August 10th each year. Celebrate this year by gathering your family for bonding time around a fire and roast up some classic s’mores. It doesn’t matter if you spark up your fire in a traditional pit, chiminea, fire bowl or a portable fire table, a small flame is all you need to create tasty s’mores treats and inspire family conversation.

3. Where does the name s’mores come from?
Answer: S’mores folklore suggests that s’mores were named right by the campfire. After eating one, young kids chanted “Gimme some more!” which blended together to sound like s’more.

5. What is each breakable section of a Hershey’s Milk Chocolate bar called?
Answer: A pip.

6. How many pips are used to make a traditional s’mores?
Answer: Six pips, which is half of a Hershey’s Milk Chocolate bar.

7. How many Hershey’s Milk Chocolate bars are made each year?
Answer: The Hershey Company makes more than 373 million milk chocolate bars annually. Because each bar can make two s’mores, there’s enough to make 746 million gooey s’mores treats every year.

8. Where does the name graham cracker come from?
Answer: The graham cracker was invented by and named after Reverend Sylvester Graham. He was adamant about eating a diet rich in whole wheat.

10. How many s’mores are consumed each day of summer?
Answer: An average of 2.1 million (based on six-packs of Hershey’s Milk Chocolate Bars).

12. What preparation method creates the perfect s’mores?
Answer: The classic s’mores recipe made around a fire. For more inspiration, ideas and s’mores recipe variations, visit www.celebratewithhershey.com