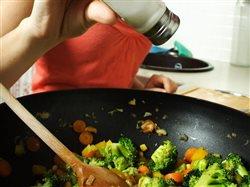 The dangers of a low salt diet

(BPT) – Salt, or sodium chloride, is essential for life. In fact, no mineral is more essential to human survival than sodium because it allows nerves to send and receive electrical impulses, helps your muscles stay strong, and keeps your cells and brain functioning. However, sodium chloride (salt) is a nutrient that the body cannot produce, and therefore it must be eaten.

The average American eats about 3,400 mg per day of sodium, according to The National Health and Nutrition Examination Survey. You may have heard that this is too much, but according to new research, it may actually be on the low side of the healthy range. A 2014 study, published in the New England Journal of Medicine, tested sodium consumption in more than 100,000 people in 17 countries. The study found that the healthy range for sodium consumption was between 3,000 and 6,000 mg per day. Eating more than 7,000 mg per day of sodium increases your risk of death or cardiovascular incidents, but not as much as eating less than 3,000 mg per day. The low salt diet was significantly more harmful than the high salt diet.

Salt has many health benefits.

The other component of salt, chloride, is also essential to survival and good health. It preserves acid-base balance in the body, aids potassium absorption, improves the ability of the blood to move harmful carbon dioxide from tissues out to the lungs and, most importantly, it supplies the crucial stomach acids required to break down and digest all the foods we eat.

Because the level of salt consumption is so stable, it is an ideal medium to use for fortifying other essential nutrients such as iodine. Iodized salt first produced in the U.S. in 1924 is now used by 75 percent of the world’s population to protect against mental retardation due to Iodine Deficiency Disorders (IDD). Iodine is an essential element in healthy human life, enabling the function of thyroid glands to produce needed hormones for proper metabolism. When children in the womb don’t get enough iodine from their mother, fetal brain development may be impaired. During pregnancy, iodine deficiency can cause a child to develop learning disabilities and mental retardation as well as developmental problems affecting his speech, hearing and growth.

Salt is also a vital component of hydration. After exercise, it is critical to replace both water and salt lost through perspiration during exercise. That is why all athletes make sure they are consuming sufficient salt during and after a workout. Expectant mothers and seniors, in particular, need to guard against under-consumption of salt. Higher-salt diets have also been used successfully to combat chronic fatigue syndrome. Asthma sufferers, particularly in Eastern Europe, are often treated by having the person spend time in salt mines or salt caves. This is because the unique microclimate, containing ultrafine salt particles helps clear the lungs.

Low salt diets can be especially harmful for the elderly. In older people, mild hyponatremia (low sodium concentration) is the most common form of electrolyte imbalance in the blood. Indeed, several recent medical papers found a direct relationship between hyponatremia and unsteadiness, falls, bone fractures and attention deficits. Elderly people on low salt diets often experience lack of thirst which leads to dehydration and they experience loss of appetite that leads to a host of health problems.

Falls are one of the most serious problems for the elderly and about a third of people older than 65 fall at least once every year. Fall-related injuries in the elderly are associated with numerous psychological and physical consequences and are a leading cause of bone breakage and hip fractures, which can lead to complications and permanent disability or death. More than 5 percent of all hospitalizations in people older than 65 years are due to fall-related injuries. Sadly, the research shows that in assisted living facilities where almost all residents are given low-salt diets, the rate of falls and fractures are three times as great as in the normal home environment.

It is well documented that the Japanese and the Swiss enjoy some of the longest life expectancy rates of anyone in the world. It is less known however, that they also have among the highest rates of salt consumption. A review of peer-reviewed medical research around the world indicates that if people were to actually consume the low levels of salt recommended in the U.S. Dietary Guidelines, they would put their health at risk. Fortunately, most Americans — including the elderly — when left to their own choice consume salt within the healthy range.