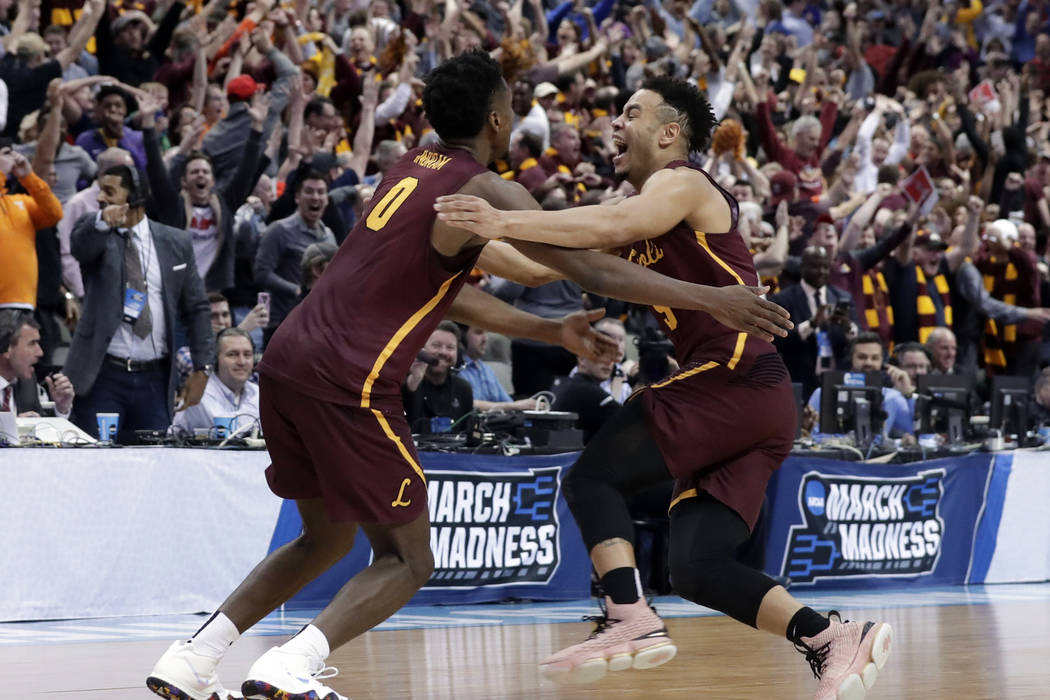 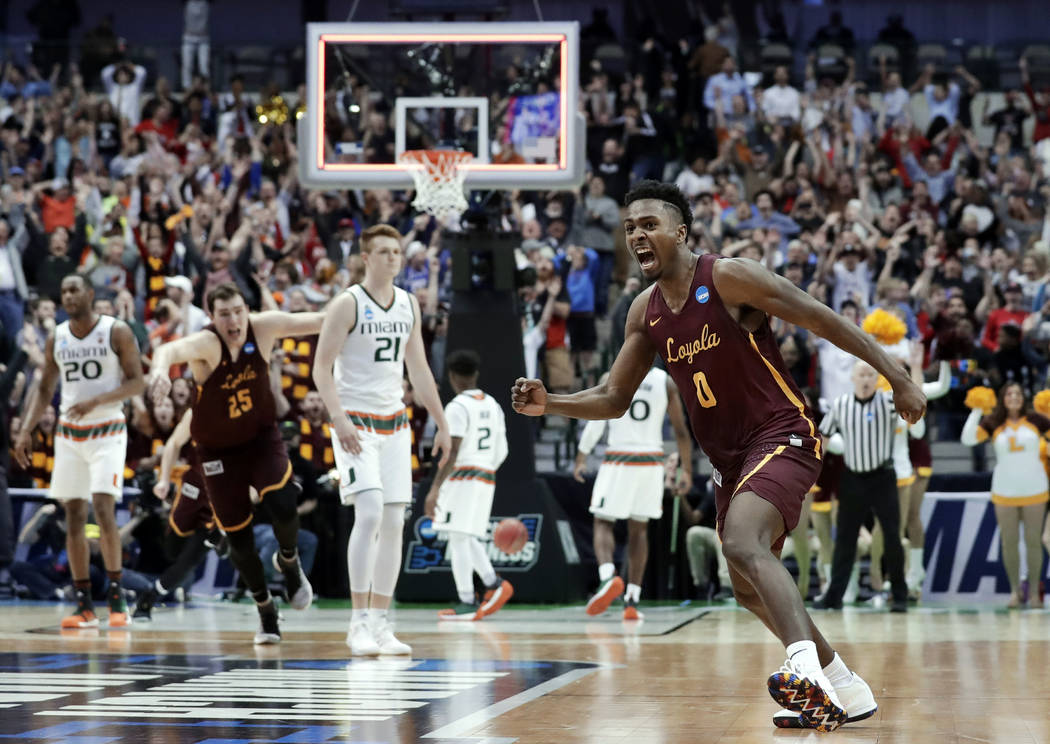 Loyola-Chicago guard Donte Ingram (0) celebrates sinking a three-point basket in the closing seconds of the second half of a first-round game against Miami at the NCAA college basketball tournament in Dallas, Thursday, March 15, 2018. (AP Photo/Tony Gutierrez) 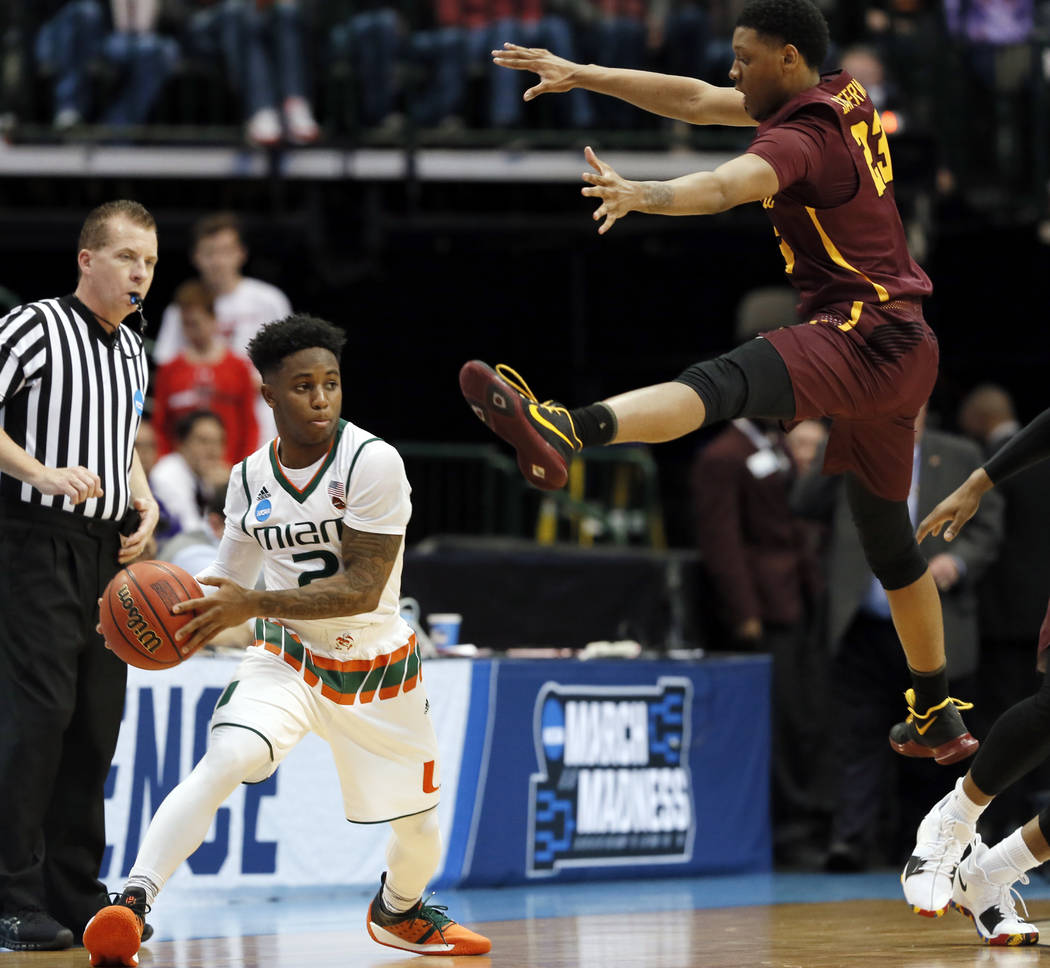 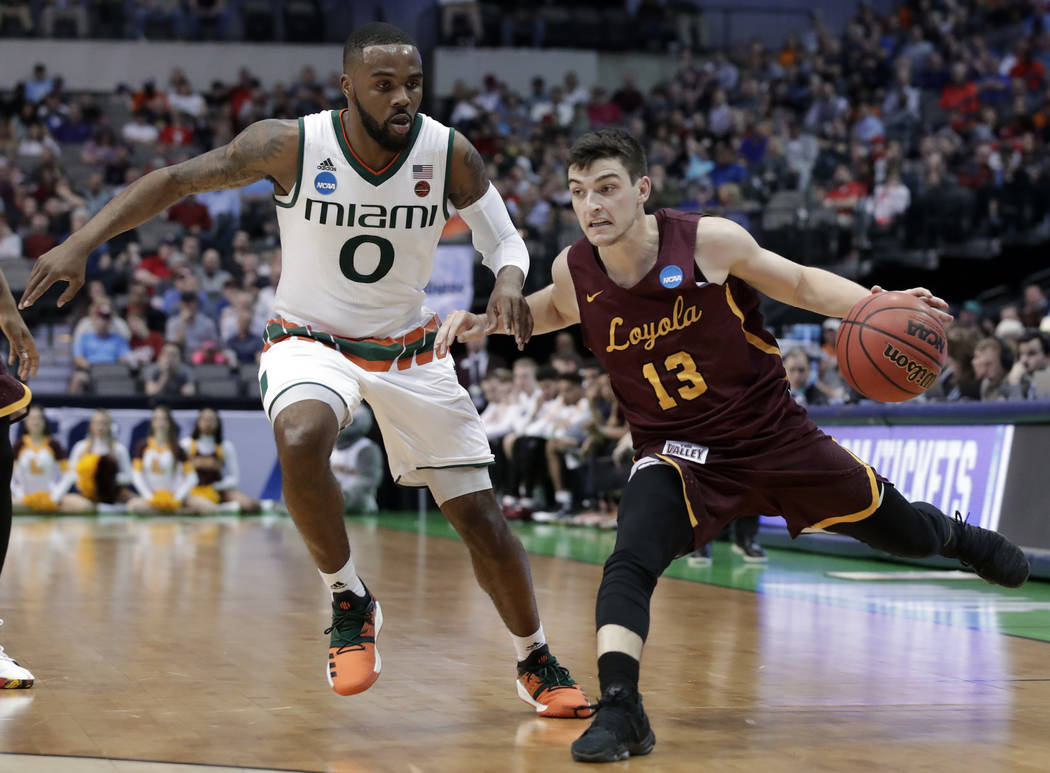 Miami guard Ja'Quan Newton (0) defends against a drive to the basket by Loyola-Chicago guard Clayton Custer (13) in the first half of a first-round game of the NCAA college basketball tournament in Dallas, Thursday, March 15, 2018. (AP Photo/Tony Gutierrez) 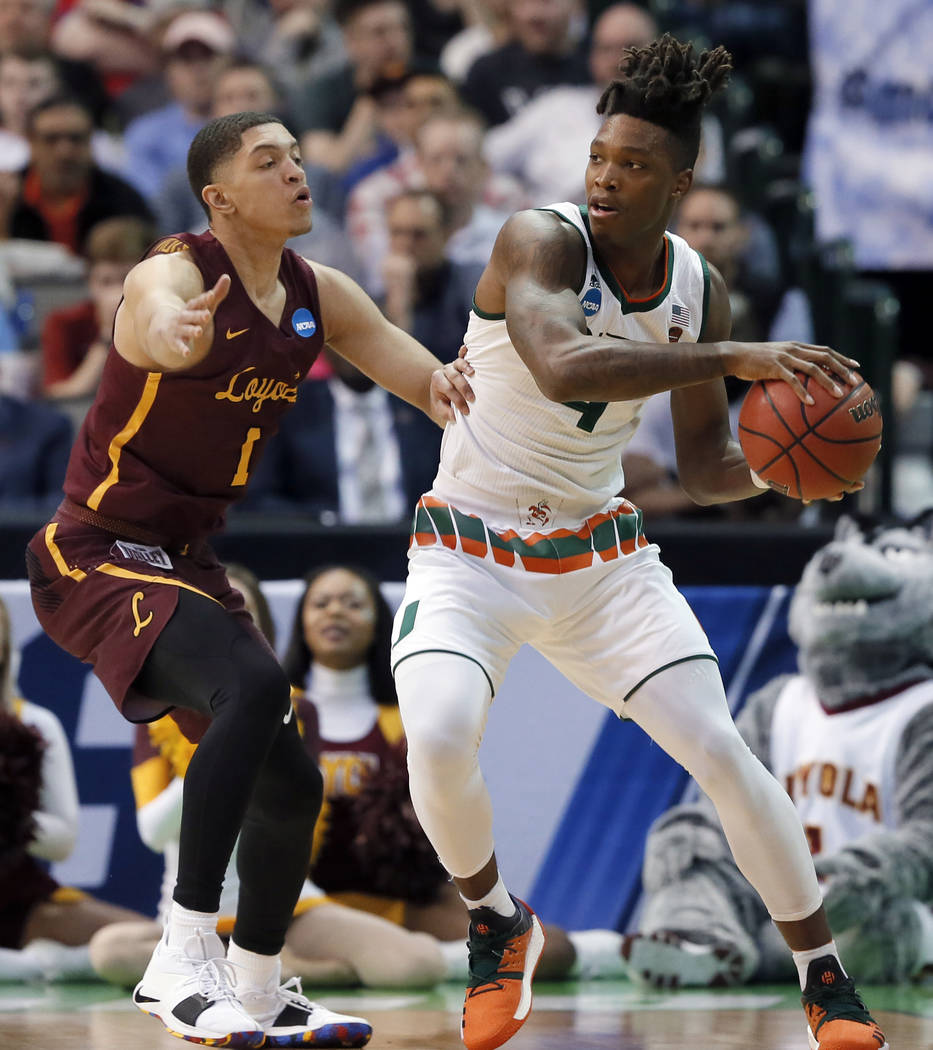 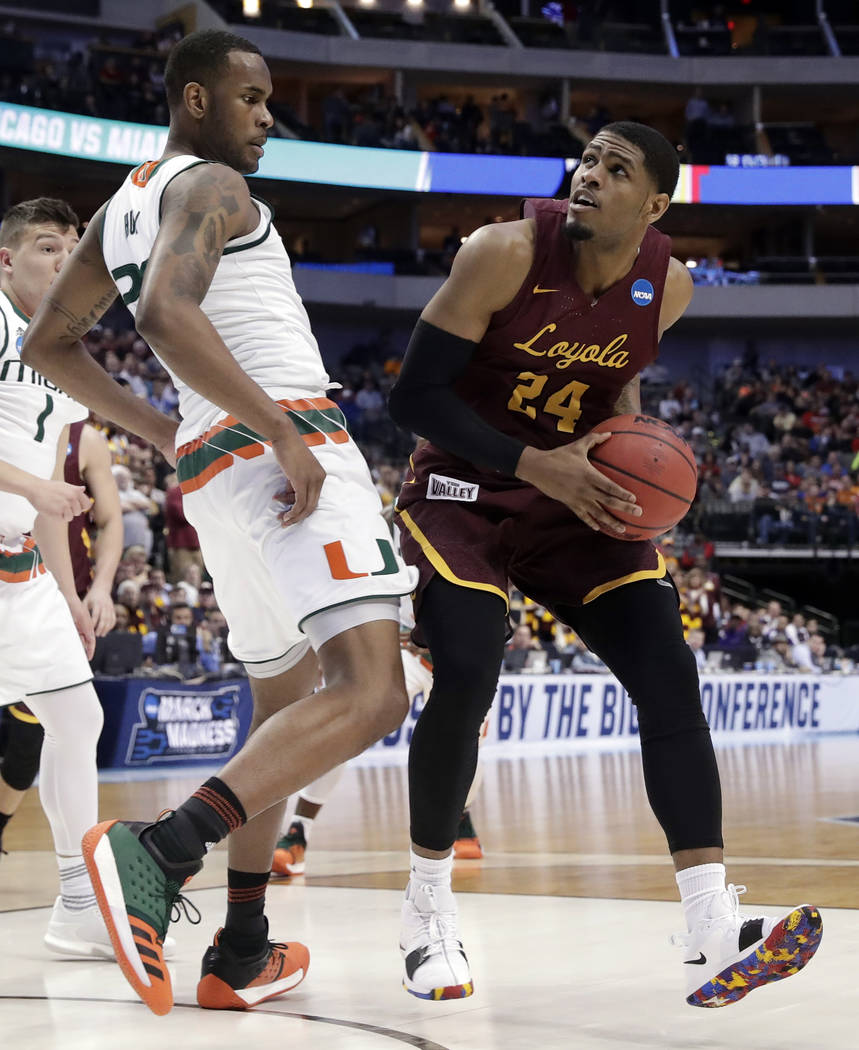 Miami forward Dewan Huell (20) defends as Loyola-Chicago forward Aundre Jackson (24) works for a shot attempt in the first half of a first-round game at the NCAA college basketball tournament in Dallas, Thursday, March 15, 2018. (AP Photo/Tony Gutierrez)

DALLAS — Donte Ingram hit a 3-pointer from the March Madness logo just before the buzzer, lifting Loyola-Chicago over Miami 64-62 in a Thursday thriller to celebrate its first NCAA Tournament appearance in 33 years.

Ingram’s long shot from well above the key came after Lonnie Walker IV missed a free throw with a chance to give the Hurricanes a three-point lead with 9 seconds remaining.

The 11th-seeded Ramblers (29-5) matched the school record for wins from their 1963 national championship team in their first NCAA trip since losing to Patrick Ewing and Georgetown in the Sweet 16 in 1985. They advanced to face third-seeded Tennessee on Saturday.

Loyola was boosted by a pregame prayer from its team chaplain, 98-year-old Sister Jean Dolores Schmidt. She’s held that post for more than two decades and, sitting courtside in her wheelchair, got hugs from the Ramblers when it was over.

“I said we wanted to get that big W up there, and we did,” she said in a postgame TV interview.

The sixth-seeded Hurricanes (22-10) led most of the second half in their third straight trip to the tournament, but couldn’t pull away in the final minutes and lost in the first round for the second straight year.

The buzzer sounded as Ingram’s shot went in, and the Ramblers celebrated wildly in front of the raucous fans wearing maroon-and-gold scarfs in the American Airlines Center sections across from their bench.

But officials put 0.3 seconds back on the clock, forcing Loyola to gather on the bench and postponing the celebration until after a desperation full-court pass bounced away harmlessly.

The game-winner came after coach Porter Moser initially signaled for a timeout after Walker’s missed free throw, but then motioned his players to bring the ball up the court.

Clayton Custer hit a tying 3 in the final 2 minutes and led Loyola with 14 points on 4-of-6 shooting from long range. Ingram was 3 of 8 from 3 and finished with 13.

Walker scored 12 points for the Hurricanes.

Loyola-Chicago: Most of Moser’s key players should be back next season, giving the Ramblers a chance to keep the NCAA appearances coming after such a long drought and such a big win.

Miami: The Hurricanes were back in Texas five years after winning twice in Austin to advance to the Sweet 16. They looked they’d have another shot at that until Ingram’s stunner.

With Miami’s season over, Loyola advances to play third-seeded Tennessee in the second round.