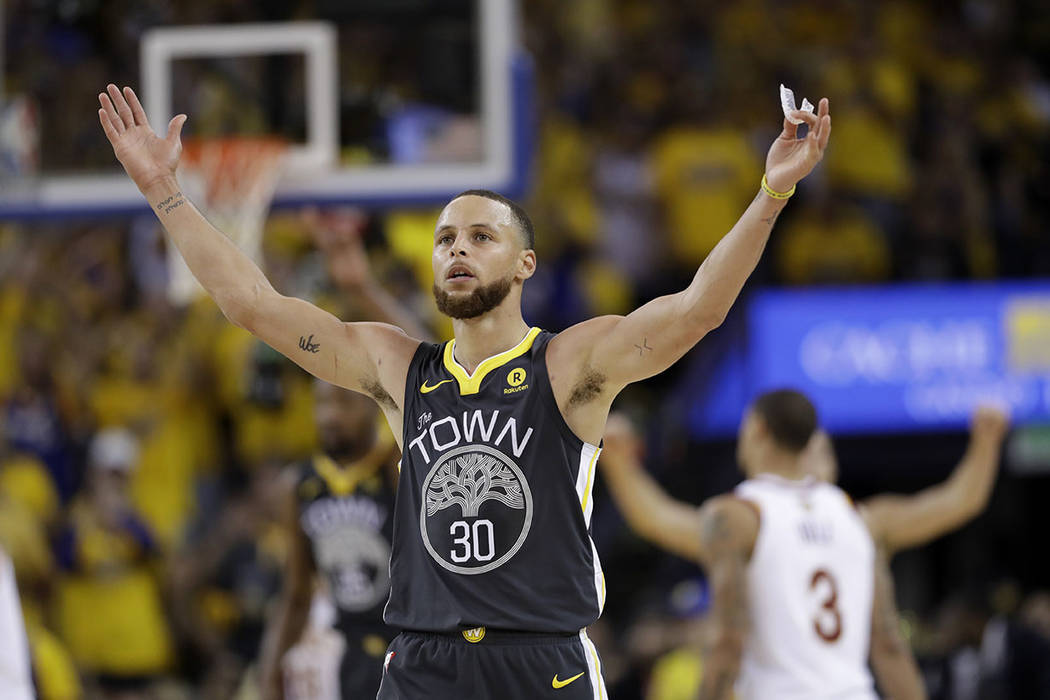 Golden State Warriors guard Stephen Curry (30) celebrates during the second half of Game 2 of basketball's NBA Finals between the Warriors and the Cleveland Cavaliers in Oakland, Calif., Sunday, June 3, 2018. (AP Photo/Marcio Jose Sanchez) 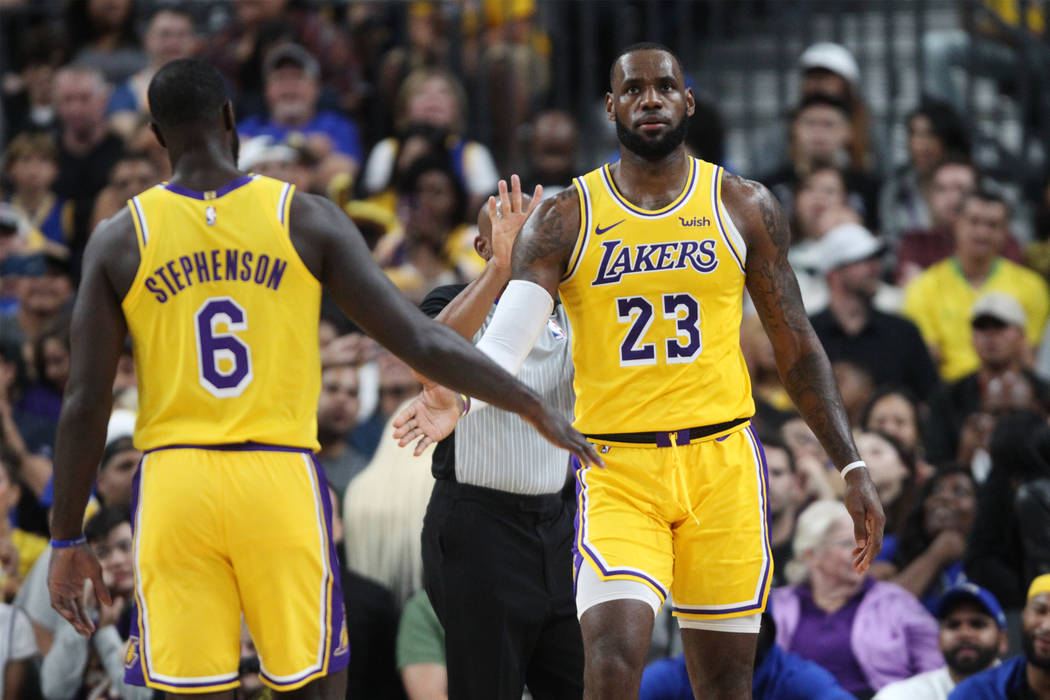 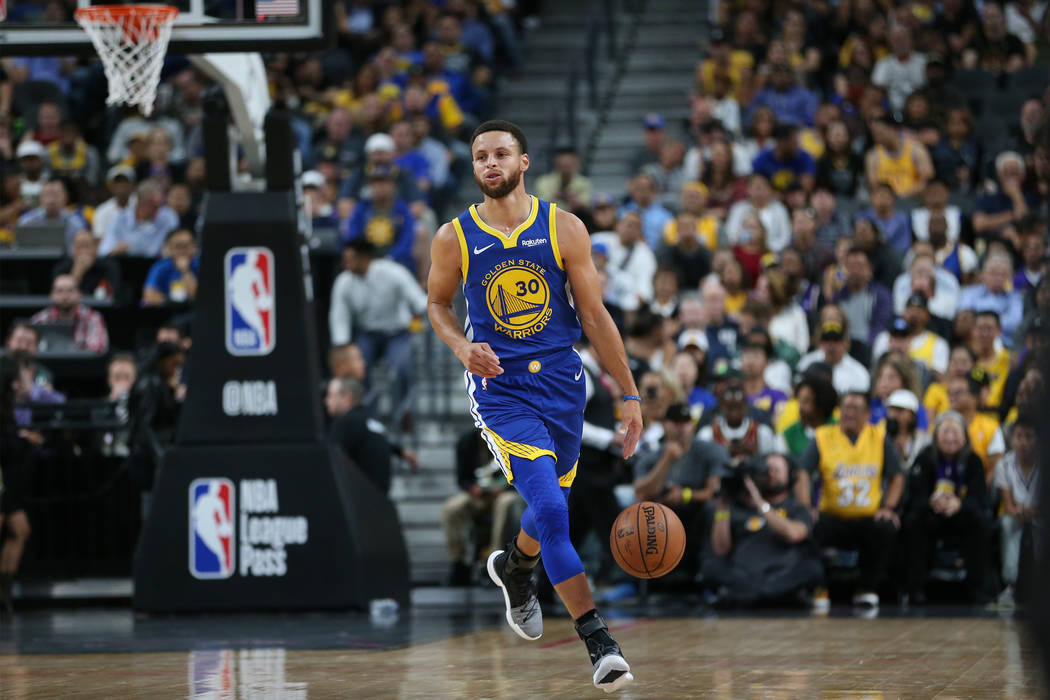 A Westgate sports book bettor placed a $67,000 wager to win $670 on the Warriors to make the NBA playoffs this season.

The gambler would get a much better return on his investment by betting on Golden State to win the 2019 NBA title.

The Warriors are minus 200 favorites to claim their third consecutive NBA crown and fourth in five years. And Westgate sports book manager and oddsmaker Jeff Sherman predicts a three-peat.

“I fully expect to see what we’ve seen the last few years,” Sherman said. “Houston took a step back when it lost (Luc Mbah) a Moute and (Trevor) Ariza on defense and the fact that Golden State added (DeMarcus) Cousins for nothing. He can be postseason help if he’s even needed.

“The only thing that might close the gap a little is if Houston trades for (Jimmy) Butler and adds him to the team.”

LeBron James will try to lead the Lakers back to prominence as he joins a Western Conference team for the first time. But Sherman said their title odds are mostly based on their popularity and the amount of money bet on them and that their true odds are higher.

“That’s because nobody bets Utah to win the title and we get tons of support on the Lakers at those odds,” he said. “Season wins are more indicative of the power ratings from each conference.

“I don’t expect this Lakers team to be a title contender this year. All the young players are going to need another year to learn from playing with LeBron. We’ve seen it in the past with LeBron teams in Miami and going back to Cleveland. There’s an acclimation period. It took a while to develop that chemistry.”

On paper, James’ departure from Cleveland gave Boston a clear path to the Eastern Conference title. The Celtics lost to the Cavaliers in seven games in last season’s conference finals without All-Stars Gordon Hayward and Kyrie Irving.

They’re both healthy now and Boston is the minus 125 favorite to win the East over Toronto (plus 250) and Philadelphia (plus 350).

“I have a hard time seeing past the three teams at the top of the East,” Sherman said. “We’ll have to see how the pieces fit in Boston. Just adding talented players doesn’t automatically make you better. The best thing they have going for them is the best coach in basketball, Brad Stevens.

“He should be able to manage minutes and egos and get these guys buying into what they have to do as a team.”

The Raptors added Kawhi Leonard and Danny Green in a trade with the Spurs for DeMar DeRozan. The Sixers will start Markelle Fultz at shooting guard in Tuesday’s season opener against the Celtics after the 2017 No. 1 overall draft pick was limited to only 14 games last season with a shoulder injury.

The Westgate’s two biggest NBA needs are for the Rockets and Spurs to go under their win totals. Houston was bet up from 54.5 to 57. San Antonio’s total actually dropped from 45.5 to 42.5 after a rash of injuries, most notably starting point guard Dejounte Murray’s season-ending torn ACL.

The Westgate also posted playoff props on every team. The biggest bet it took was $90,000 to win $50,000 on the Spurs, who’ve made the playoffs an NBA record 21 consecutive seasons.

“It’s fringe to me,” Sherman said of San Antonio’s chances to extend the streak.

In fact, Sherman’s best bet is on the Spurs to go under their win total, which he played at 45.5.

“I didn’t think much of them, as far as being an older 2-point shooting team,” he said. “The loss of Murray is going to be really big and the Western Conference got better from top to bottom.

“Outside of Sacramento, no matter who you play in the Western Conference is going to be competitive night in and night out.”