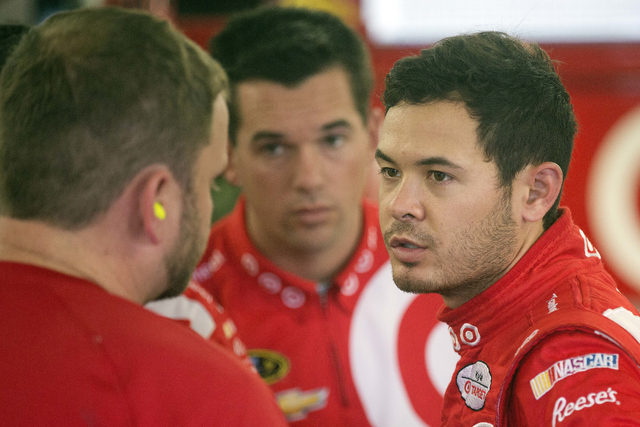 Kyle Larson claimed his first career Sprint Cup victory four weeks ago at Michigan and the 24-year-old from Elk Grove, California, looks like he wants another one based on his dominating practices at New Hampshire Motor Speedway. He posted the fastest speeds in all three sessions and will start sixth in Sunday’s New England 300.

Larson has shown speeds similar to his display this weekend ever since his rookie campaign in 2014, but the big difference now in the eyes of Las Vegas bookmakers is that he’s got a win under his belt. He has respect and it reflects in his odds, where he used to be 20-to-1 weekly before the win but is now 10-to-1 and seen as one of NASCAR’s small group of elite drivers.

In the July 17 race at New Hampshire, Larson finished 17th but showed during his rookie campaign of 2014 that if given a solid car he could produce great results. He was third in his first start there and runner-up in the fall. He’s never had a car this fast at New Hampshire, though. His stellar practices on Friday and Saturday were his best of the season at any track.

He is the top candidate this week to derail the Joe Gibbs Racing express which has won the past three races on the schedule and 14 of 27 races this season. The last Chevrolet to win on the flat 1-mile layout was nine races ago with Kasey Kahne in the summer of 2012.

In addition to looking at results from July’s New Hampshire race when handicapping, you can throw into the mix what happened at Phoenix in March and also the two Richmond races. Although the three tracks are configured differently, they’re all similar in being flat and almost the same distance. If a driver is good at one track, they’ll likely be good on the other. Crew chiefs often use the same chassis at all three tracks during the season if having success.

JUST HOW GOOD IS GIBBS?

The Westgate SuperBook has all five of the Gibbs-equipped cars at odds of 7-to-1 or less if that gives any insight to how good this team is. They’ve won the past three races on these type of tracks: Carl Edwards at Richmond in April, Matt Kenseth at New Hampshire and Denny Hamlin at Richmond two weeks ago. They’ve also won the past three races at New Hampshire: Kenseth won the last two and Las Vegas native Kyle Busch won the summer race last year. Hamlin also won in 2012 and Kenseth in 2013 giving Gibbs a win in five of the past eight New Hampshire races. In the 10-consecutive-lap category during Saturday’s early practice, Martin Truex Jr. had the top time followed by three of his teammates. In the final session, Edwards was best. Gibbs is tied with Hendrick Motorsports for most wins (seven) all time at New Hampshire.

Harvick had the second-fastest 10-consecutive lap average during the final practice session and is a driver to definitely consider based on his chassis alone. All this chassis does is finish strong no matter what track it runs on. Seven of its nine career starts from 2015 and 2016 have been fourth or better, which includes runner-up three times and two Phoenix wins. Harvick was already listed as one of the favorites (6-1) on the basis of doing well on these type of tracks before the team news release came out Thursday detailing the chassis dominance. His only New Hampshire win came in 2006 and he’s finished fourth or better in three of his past four starts there. After finishing 20th last week at Chicago, he sits 13thout of 16 drivers in points after one Chase race. This chassis should give the team extreme confidence to pull in at least a top-five finish.

Micah Roberts, a former sports book director, has been been setting NASCAR lines in Las Vegas since 1994. Follow on Twitter: @MicahRoberts7