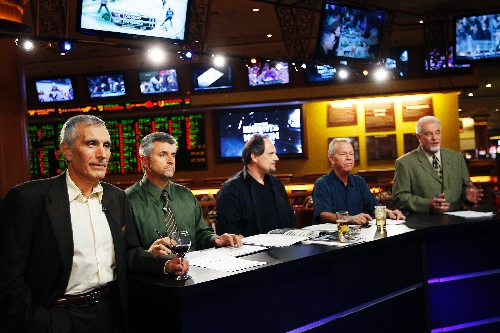 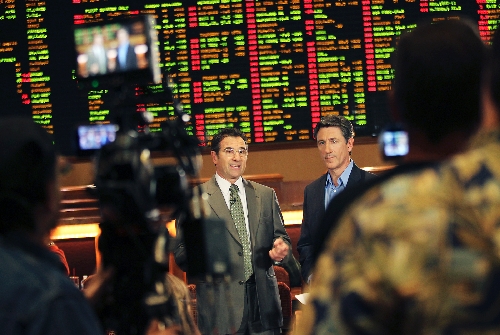 If the setting didn’t need to be the South Point’s sports book, “The Linemakers” could easily be filmed in someone’s den.

The half-hour weekly cable television series surrounds seven friends discussing and analyzing the weekend’s college and professional football games. The group talks about betting lines, a team’s performance against the point spread, player tendencies and the most anticipated contests.

However, these aren’t just any seven guys.

The cast members of “The Linemakers” have more than 100 years of combined experience in the Las Vegas race and sports wagering industry. They have opened or managed some of the Strip’s best-known books, including The Mirage, Caesars Palace, Wynn Las Vegas, Las Vegas Hilton and the Palms.

The cast members — five former race and sports book operators, one of the industry’s best-known oddsmakers, and a veteran sports broadcaster — have been friends, rivals and co-workers over the past three decades.

“The goal is to be informative and entertaining, and to be ourselves,” former Caesars Palace and Wynn Las Vegas sports book manager Vinny Magliulo said.

Added former Las Vegas Hilton sports book manager Rick Herron, “We all talked about doing a show like this over the years, but we were never able to get it off the ground. I think this comes across as being a lot of fun.”

The show airs twice on Fridays, at
8 p.m. and again at 8:30 p.m., on the Velocity channel, which is owned by the Discovery Network. Velocity re-airs the show several times early Saturday mornings.

“The Linemakers” is filmed Tuesdays at the South Point. The setting for the segments alternates between the counters in the sports book and the Del Mar Lounge, with the book’s electronic tote board as the backdrop.

But the true setting is Las Vegas.

“The credibility of the show is who these guys are and what they have accomplished,” said Brian Blessing, a Las Vegas radio and television host who moderates the program’s discussions. “There is a high level of expertise in this group and I think that comes across to the viewer.”

“The biggest thing I like to get across is sports betting is OK,” said oddsmaker Kenny White, who set the lines for
90 percent of Nevada’s sports books when he operated Las Vegas Sports Consultants. “If you keep it under control, it’s a great entertainment value for your dollar. And, it’s a better investment than the stock market or real estate.”

The show’s producers, Terry Leiweke and Nick Rhodes, said the camaraderie of the show’s cast makes “The Linemakers” successful.

Leiweke said the production staff provides Velocity with a roughly 22-minute show. The network sells the advertising time within the segments. So far, 13 episodes have aired.

Velocity Senior Vice President and General Manager Bob Scanlon said the network has authorized production of “The Linemakers” through the Super Bowl in February. Plans are under way to bring the series back in March for the NCAA national basketball tournament.

Scanlon said “The Linemakers” is geared toward Velocity’s target audience of upscale men.

“The show was conceived as giving inside information to the smartest guys in the room,” Scanlon said. “It tells someone why and how the line on a game is set.”

This week, two shows will be produced: one to air Wednesday, previewing Thanksgiving Day football games; and Friday’s usual show highlighting the weekend.

“The Linemakers” is not a “tout show,” where sports handicappers argue over the point spreads while urging viewers to call toll-free telephone numbers for their “stone-cold, guaranteed, lock-of-the-year picks.”

It might be clear which team a Linemaker might favor, but it’s not an over-the-top “you need to make a wager” recommendation.

“When you’re giving thoughts about a line, it’s hard for your opinion not to come across,” said Richie Baccellieri, who has run the books at Caesars, MGM Grand and the Palms.

“The show is really fast-paced and I try to get a lot in. I’ll have 15 notes on every game but I only get in two or three points,” he added.

The show’s segments are fast-paced, and the cast clearly has fun. Fitting of Las Vegas, drinks are served and smoking is not discouraged. Think of “Mad Men” does sports betting.

“We do enjoy ourselves,” Magliulo said. “The books are the excitement centers of Las Vegas and this show is a promotion of that experience.”

“The Linemakers” was originally an hourlong program, but after three episodes it was trimmed to a half-hour to keep it fast-paced and lively.

“We’re trying to let people know what goes on behind the counters,” D’Amico said. “We try to educate the bettors. There has never been a show like this.”

The major segment is the look at the upcoming week’s top games with White, Baccellieri and Herron, anchored by Blessing. Magliulo will interview a special guest, usually a current race and sports book operator.

“How many times have you sat in the family room and watched a game and wondered how the line on that game came about?” Blessing said. “That’s what this show is all about.”

The major Strip resorts are featured in the show’s opening titles, although filming at the South Point was a natural decision. Most of the cast members worked for South Point owner Michael Gaughan at some point in their careers, and Gaughan has supported the show’s concept.

“Michael considered the idea and gave us an answer in two minutes,” said Magliulo, who got his start in gaming working for Gaughan. “We’re thrilled to be here. He knows all of us.”