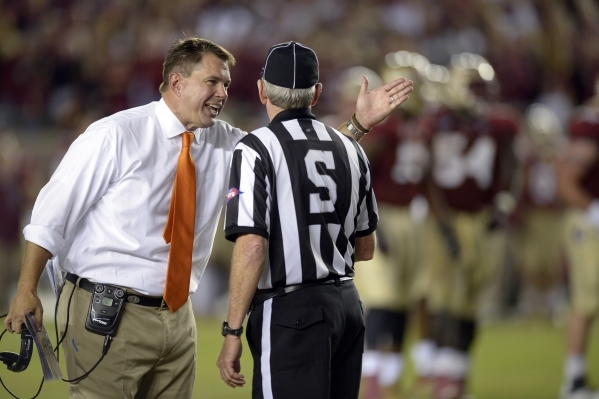 Hope typically springs eternal when a new coach rides into town sporting a resume filled with gold stars and glowing endorsements. It will be only a matter of time before banners are being hung and parades planned. Make some extra room in the trophy case.

Step back in time almost five years ago as Al Golden, who had resurrected Temple’s football fortunes from the ashes, accepted the coaching position at Miami. Grand things were expected. Almost even guaranteed.

“He is ready to come to a program that can compete and win national championships. He will inspire this football program to greatness,” then-Miami athletic director Kirby Hocutt said at the time of Golden’s hiring.

As fate would have it, however, through Golden’s first four seasons, Miami mostly has been mired in mediocrity rather than gripped in greatness. The Hurricanes entered this season with a 28-22 record, and only once in four previous tries has Miami cracked seven wins during Golden’s tenure.

Miami stumbled to a 6-7 record last season. That team included seven players selected in this year’s NFL Draft. Many Miami alumni are barking for a change, and most renditions of college coaches on the hot seat list Golden’s name near the top.

In a nonconference game that ultimately could seal his fate or extend his term, Miami (2-0) hosts Nebraska (1-1) in a game that once would have been the weekend’s marquee matchup. Not so much today, however.

Miami faced relative walkovers in Bethune-Cookman and Florida Atlantic in the first two weeks, so this represents the Hurricanes’ first true test. Nebraska, under first-year coach Mike Riley, lost its opener at home to Brigham Young on a game-ending Hail Mary.

Although eventually taking charge of the game en route to a 44-20 victory at Florida Atlantic last week, Miami looked vulnerable at times, especially on defense. The Owls racked up 389 total yards and averaged almost 6 yards per play despite losing arguably their top two offensive players in quarterback Jaquez Johnson and tailback Greg Howell.

Take the Cornhuskers as 3-point underdogs. Riley gets his first significant victory in Lincoln, and Golden’s stock continues to sink.

• Mississippi-ALABAMA (Under 53) — After becoming the first college team to eclipse 70 points in two consecutive games since 1968, Mississippi travels to Tuscaloosa, Ala., for its Southeastern Conference opener. And, trust me, the Alabama defense should not be confused with those of Tennessee-Martin and Fresno State, the Rebels’ first two opponents.

Mississippi quarterback Chad Kelly, nephew of NFL Hall of Famer Jim Kelly, will be making his first collegiate road start. All-America left tackle Laremy Tunsil probably will miss his third straight game as the NCAA investigates eligibility concerns. Tunsil has not been missed yet, but his absence would be huge against the Crimson Tide.

Alabama has quarterback issues and will attempt to slow the game’s pace behind a healthy dose of tailback Derrick Henry.

• BOWLING GREEN (+3) over Memphis — At some point, probably during the first quarter, Bowling Green quarterback Matt Johnson will surpass the 1,000-yard passing mark for the season. Johnson enters this matchup against a new-look Memphis defense having thrown for 915 yards with a solid 8-to-1 touchdown-to-interception ratio.

The Tigers, who return three starters defensively, will be playing their second straight road game after throttling Kansas 55-23. Although residing in the Mid-American Conference, generally regarded as one of the weakest leagues in the FBS, Bowling Green represents a step up in class from the struggling Jayhawks.

Even though redshirt freshman quarterback Jerrod Heard breathed some life into a moribund offense, it is difficult to envision the limited Longhorns trading punches with a Golden Bears offense ranking among the nation’s best. Since the start of the 2007 season, Texas is 5-12 ATS in the underdog role.

• Air Force (+25½) over MICHIGAN STATE — Coming off one of the biggest victories in program history, 31-28 over Oregon, Michigan State must shift its attention to pesky Air Force. The Spartans spent much of the offseason preparing for the Ducks’ fast-paced, fun-and-gun offense, but now must prepare to slow the Falcons’ triple-option, cut-blocking attack.

It is difficult to envision Michigan State will bring its full collective measure of emotion to the table. In its past nine games as an underdog against a ranked opponent, Air Force has gotten the money seven times.