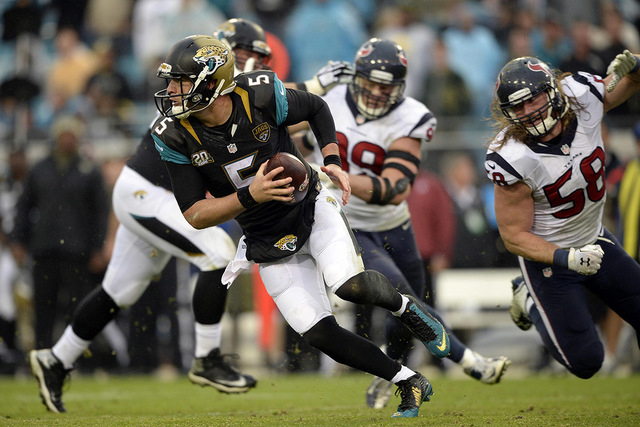 With three games remaining and their playoff hopes hanging by the string, the Browns turn to Manziel for a spark – or at the very least, serious evaluation. He’s at home, but facing a veteran defense that will cash in on any erratic throws from the rookie.

The threat is real from the Bills because of their pass rush and capable receiving corps, but it’ll take near perfection from QB Kyle Orton and his offensive line to pull the surprise.

The Texans have never won a game in Indianapolis – 0-12 all-time. With a conference-best plus-12 turnover margin, this could be Houston’s year if nemesis Hilton can be contained. We’re betting on Luck delivering late in the game yet again.

The Ravens have won their past 28 home games in which they have been double-digit favorites. The Jaguars are still playing hard and may put up a fight for a half, but minus a ground game Bortles eventually will succumb to the rookie mistakes that have plagued much of his season.

The Patriots return from two weeks on the road to face a very inconsistent but dangerous Dolphins team that has won the past two meetings. Miami will again prove a tough out, but Brady will smell blood in the water against the Dolphins’ short-handed secondary and dominate in the quick-strike passing game.

Kansas City snaps a three-game losing streak by opening up the offense and forcing the Raiders to play catch-up.

Pepto Bismol has likely been in short supply during defensive meetings leading up to this game. It will be a track meet inside the dome, with a slight edge to the visiting Steelers due to the versatile threat Bell brings to the equation.

Anderson is a savvy veteran who has already beating Tampa once this season. With the o-line playing better and the Bucs’ defense ailing up the middle, Carolina relies on a run-heavy scheme to steadily pull away.

The Giants aren’t scaring anyone defensively but can still attack weaker prey with a skilled front four. New York could make it a laugher by avoiding turnovers.

The Broncos get their NFL-record 12th consecutive division road victory by going with the new recipe of running early and launching only as required.

Someone is going to lose valuable draft position by improving to three wins. It’s a longshot to be the Titans, who are dusting off Jake Locker, an injury-prone former first-rounder who may be hard pressed yet again to finish a game he starts.

The Vikings are just good enough to catch the Lions’ attention, but Minnesota’s six wins are all against teams currently with losing records. The Lions will physically dominate in the trenches defensively, providing Stafford & Co. with consistent short fields to play with.

Billed as one of the games of the year when the schedule came out, the 49ers now have the feeling of a grenade with multiple hands grasping at the pin. Anything can happen in a rivalry as bitter as this, but the Seahawks would love nothing more than to be the team to yank that pin and watches the seemingly inevitable implosion play out.

In a game that could determine the NFC East winner, Dallas wins for the fifth time in six trips to Philadelphia, better protecting Romo and challenging Sanchez to win the game.

Windy conditions might be the only thing to save two unsightly defenses from primetime embarrassment. The Bears commit to Forte and push toward eight wins.