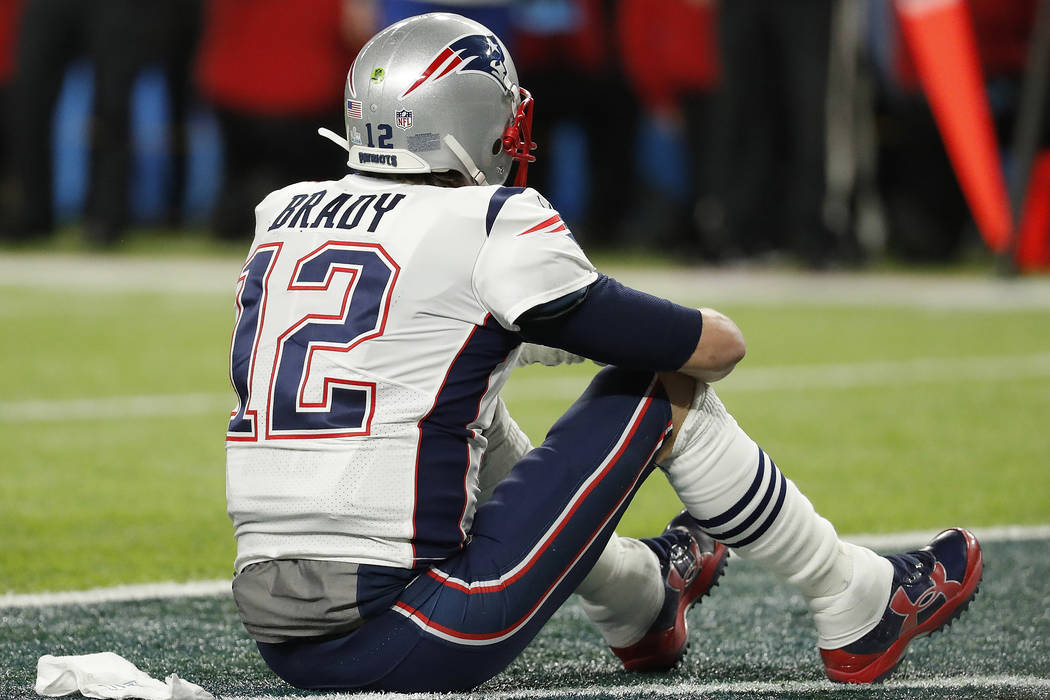 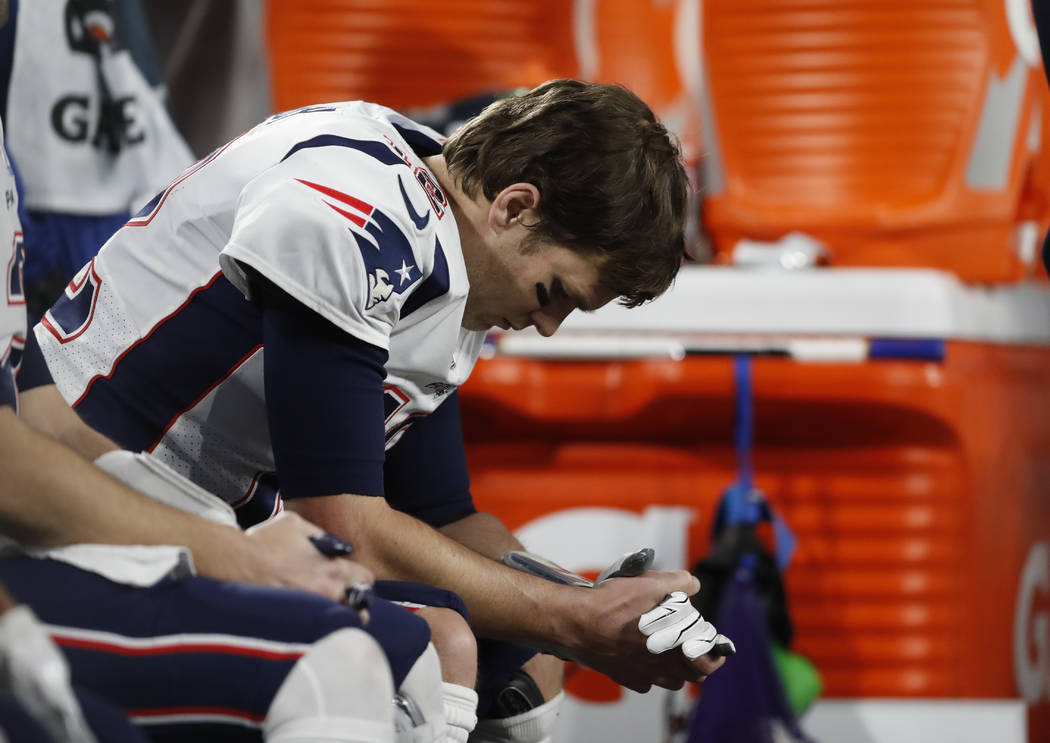 New England Patriots' Tom Brady sits on the bench after losing a fumble during the second half of the NFL Super Bowl 52 football game against the Philadelphia Eagles Sunday, Feb. 4, 2018, in Minneapolis. (AP Photo/Jeff Roberson) 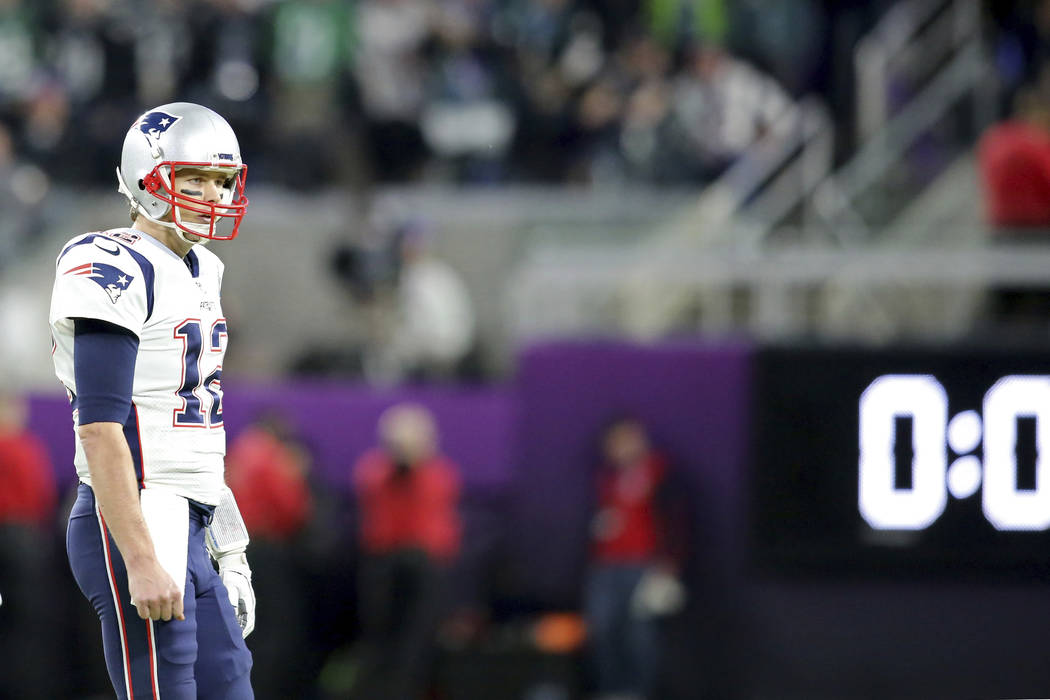 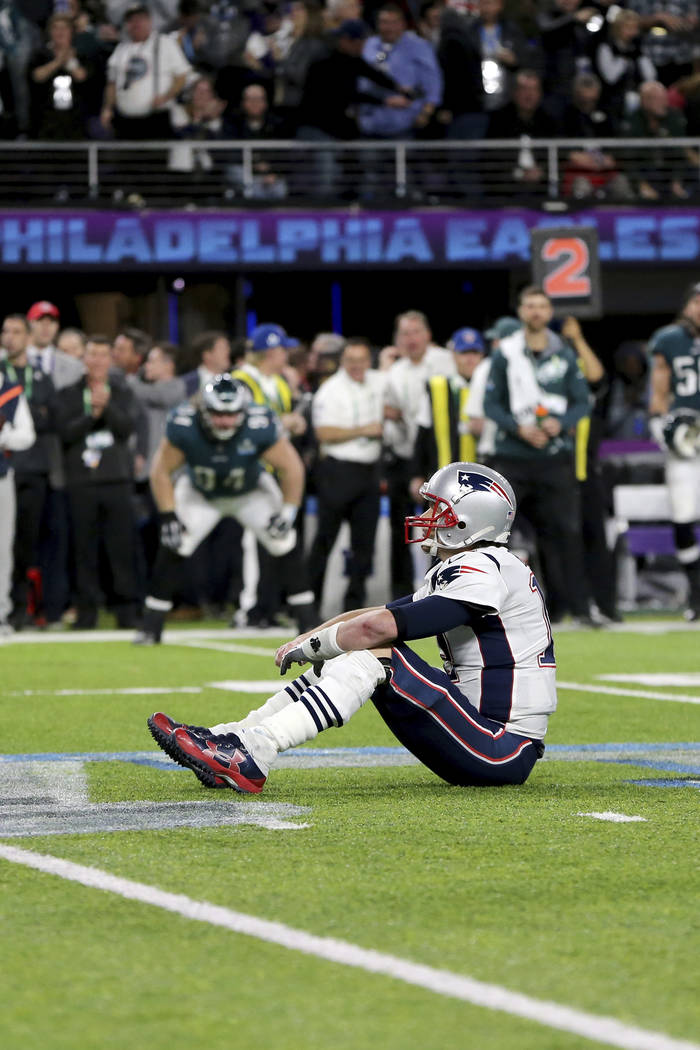 New England Patriots quarterback Tom Brady sits on the turf after fumbling late in the fourth quarter at Super Bowl 52 on Sunday, February 4, 2018 in Minneapolis. The Eagles won the game 41-33. (AP Photo/Gregory Payan)

Exactly 17 years ago Sunday, the Patriots beat the St. Louis Rams in Super Bowl XXXVI for their first NFL title.

New England was a 14-point underdog when it upset “The Greatest Show on Turf” in a 20-17 win behind second-year coach Bill Belichick and second-year quarterback Tom Brady.

MGM Resorts sportsbook director Jay Rood never will forget that game because the MGM took a $7.6 million money-line wager on the Rams.

“That was the biggest bet the company ever took,” Rood said. “Everything else faded into the background in that Super Bowl.”

The Patriots will play in their ninth Super Bowl with Belichick and Brady on Sunday against the Rams, who now reside in Los Angeles.

New England, which hasn’t been a Super Bowl underdog since its showdown with St. Louis, is a 2½-point favorite.

Nevada books won a record 17 percent of all wagers in the Patriots’ win over the Eagles in Super Bowl XXXIX.

“In the Super Bowl, if the favorite wins but doesn’t cover, that’s like gold for the books,” William Hill sportsbook director Nick Bogdanovich said. “That’s been in the blueprint forever, if the point spread is 5 or 6 or higher.”

On the flip side, the New York Giants’ 17-14 upset of the previously undefeated Patriots as 12-point underdogs in 2008 was gold for the bettors and bad news for the books.

Rood and other bookmakers remember that game well because it was the worst Super Bowl loss for Nevada books since the state’s Gaming Control Board started tracking the games in 1991.

Books lost $2.5 million on the game, finishing with a negative hold of 2.8 percent.

“Just like every other gambler, we only remember the losses and not the wins,” Rood said.

The Giants burned Patriots backers again in a 21-17 victory in Super Bowl XLVI in 2012 as 2½-point underdogs.

The books were rooting for Marshawn Lynch to run it in from the 1-yard line in the final seconds of Super Bowl XLIX before Malcolm Butler intercepted a Russell Wilson pass to preserve New England’s win.

The Patriots appeared on their way to burning the books again in Super Bowl LII in 2017, when they trailed the Falcons 28-3 in the second half before rallying for a 34-28 overtime win to cover as 3-point favorites.

William Hill took a big hit on in-play betting during New England’s comeback, but the books won on the game overall.

“We needed them against the Falcons,” Rood said. “I thought they were dead in the water, and they came back and turned the day around for us.”

The books needed the Patriots again last year in Super Bowl LII, but the Eagles avenged their 2005 Super Bowl loss in a 41-33 victory. Nevada sportsbooks finished with a 0.7 percent hold, or win percentage. It was their second-lowest hold since 1998.

Less than 24 hours away from another Super Bowl rematch, the MGM needs the Rams, who remind Rood of the 2001 Patriots.

“The game itself is nearly identical (to the first meeting), just different uniforms,” he said. “The Patriots were the young team with the innovative coach and hot young quarterback, and now the Rams are the team that’s got the young quarterback and good young coach.”

Los Angeles quarterback Jared Goff is 24, the same age Brady was when he became the youngest quarterback to win a Super Bowl.

“It looks like a passing of the torch,” Rood said. “But I think Belichick and Brady are going to have something to say about whether that torch gets passed this year or not.”