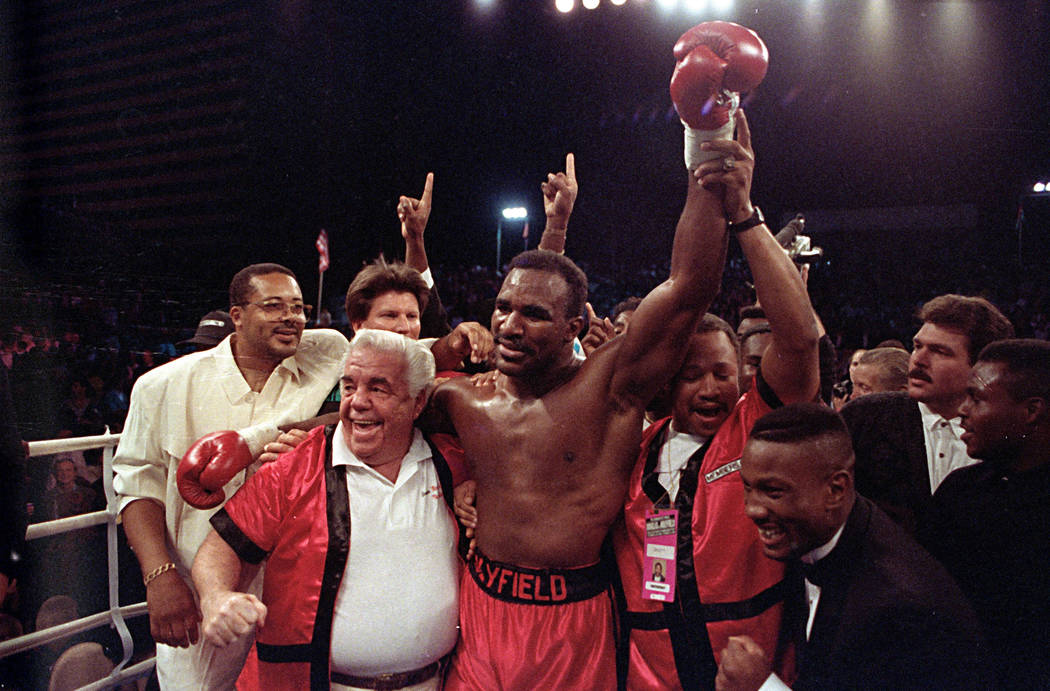 In this Oct. 25, 1990, file photo, the new world heavyweight champion Evander Holyfield is supported by his trainers Lou Duva, left, and George Benton, right, after his third round knock-out of James "Buster" Douglas at the Mirage Hotel in Las Vegas, Nev. The Boxing Hall of Famer trainer, who handled the careers of 19 champions including heavyweight titlist Evander Holyfield, died Wednesday, March 8, 2017, of of natural causes at a hospital in Paterson, N.J., where he lived, his son Dino said. He was 94. (Douglas C. Pizac, File/AP) 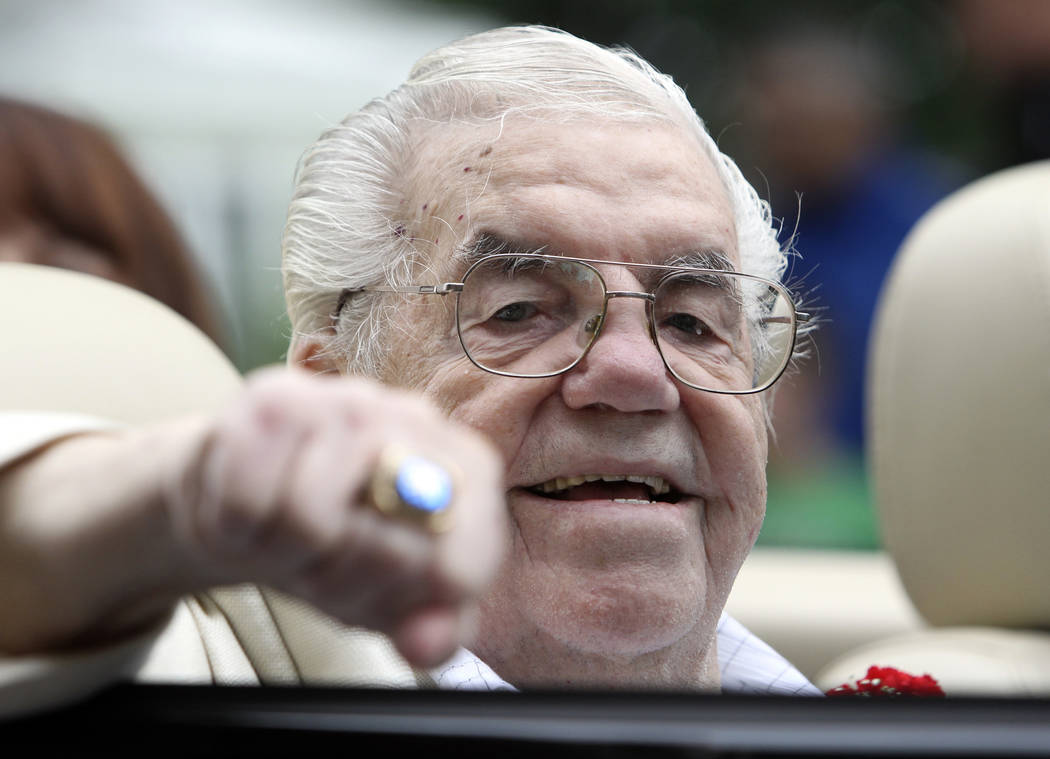 In this June 12, 2011, file photo, Lou Duva gestures at the Boxing Hall of Fame parade in Canastota, N.Y. The Boxing Hall of Famer trainer, who handled the careers of 19 champions including heavyweight titlist Evander Holyfield, died Wednesday, March 8, 2017, of of natural causes at a hospital in Paterson, N.J., where he lived, his son Dino said. He was 94. (Mike Groll, File/AP) 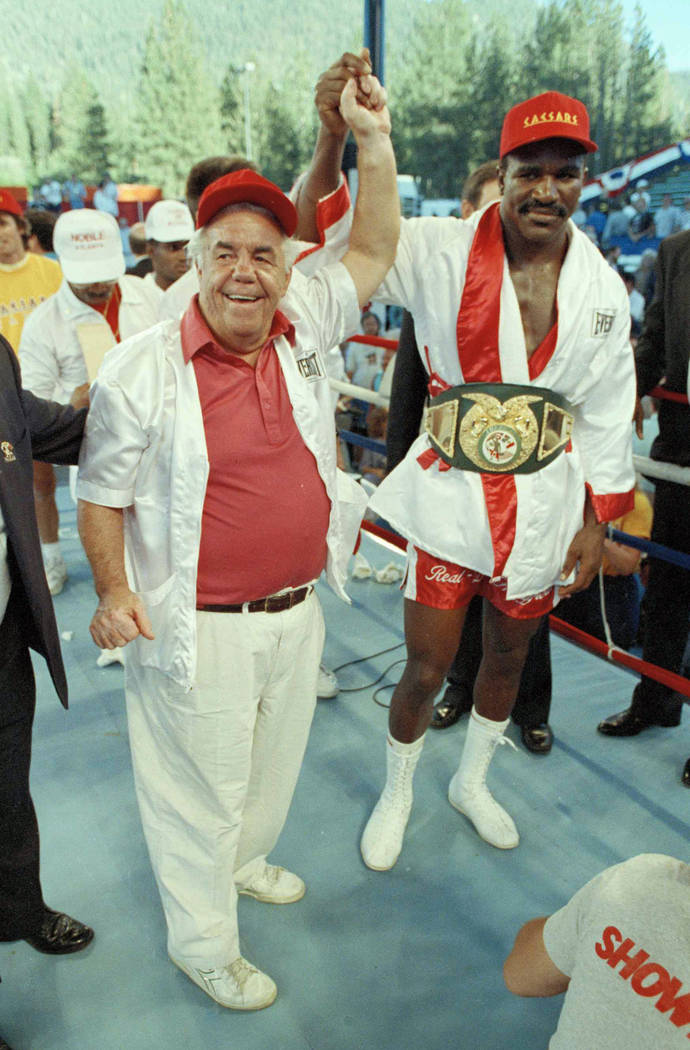 In this July 16, 1989, file photo, trainer Lou Duva raises the hand of heavyweight boxing champ Evander Holyfield at Lake Tahoe, Nev., the day after he defeated Brazilian Adilson Rodrigues. Duva, the Boxing Hall of Famer trainer who handled the careers of 19 champions including heavyweight titlist Evander Holyfield, died Wednesday, March 8, 2017, of of natural causes at a hospital in Paterson, N.J., where he lived, his son Dino said. He was 94. (Sal Veder, File/AP)

Lou Duva, the Boxing Hall of Famer who handled the careers of 19 champions, including heavyweight titlist Evander Holyfield, died Wednesday. He was 94.

The colorful Duva died of natural causes at a hospital in Paterson, New Jersey, where he lived, his son Dino said in a statement released by the family.

Duva was a fiery manager and cornerman who never hesitated to fight for his boxers during his seven decades in the sport. Many boxing figures paid their respects on social media for the legendary trainer.

A death in the family today. Very sad. #RIPLouDuva, a dear friend, good guy, and one of #boxing's greatest characters. Condolences pic.twitter.com/AyAYzKlhxR

“A reason I always loved boxing is vast array of real “characters” and among the greatest of those was Lou Duva,” Nevada Boxing Hall of Fame founder Rich Marotta tweeted.

Duva worked the corners of many memorable champions, such as Pernell Whitaker, Lennox Lewis, Meldrick Taylor, Mark Breland, Arturo Gatti and Vinny Pazienza. His first titlist was middleweight Joey Giardello, who won his crown in 1963.

The son of Italian immigrants, Duva and his family built the promotional company Main Events, which was founded in 1978, into one of boxing’s powerhouses. Duva’s son Dan promoted the boxing cards, while the older Duva took care of the fighters by training and managing them. Dan Duva, who joined his father in the International Boxing Hall of Fame, died in 1996. Dan’s widow, Kathy, runs Main Events.

Duva’s passion to protect his fighters sometimes got the best of him. Duva had an infamous Las Vegas moment when he went after Roger Mayweather following Mayweather’s unanimous decision over Pazienza at the outdoor arena of Caesars Palace in 1988. Duva hit the canvas and sustained a cut on his left cheek from a Mayweather punch.

His loyal, aggressive attitude made him one of the most lovable boxing figures of all time.

“I love what I’m doing. It’s my life. When it’s time to go, I’ll probably be fighting to get out of the casket. I’ll be yelling at the priest instead of a referee,” a quote from Duva for his 2016 biography “A Fighting Life: My Seven Decades in Boxing.” The book was written by Tim Smith, a Las Vegas resident.

“Lou was a walking encyclopedia,” Smith said. “I met him in 1984 when he was training Evander Holyfield for the Olympics. From that first meeting, we became friends and I learned a lot from him. This is a guy who watched Joe Louis spar and knew Rocky Marciano. Lou was a treasure to everyone in boxing.”