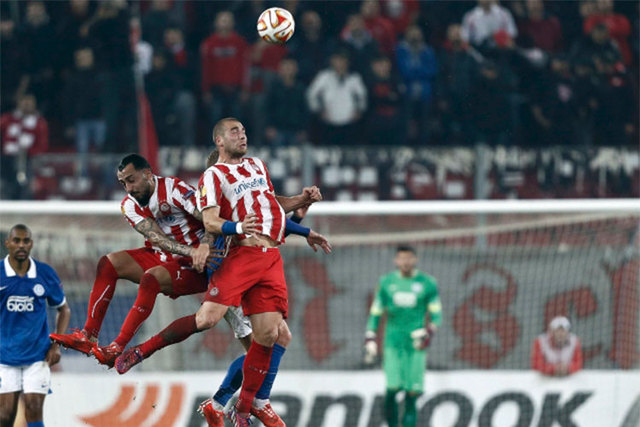 Olympiakos' Pajtim Kasami, right, and Kostas Mitroglou jump to head the ball during their Europa League round of 32 second-leg soccer match against Dnipro at Karaiskaki stadium in Piraeus, near Athens, Thursday, Feb. 26, 2015. (Reuters/Alkis Konstantinidis) 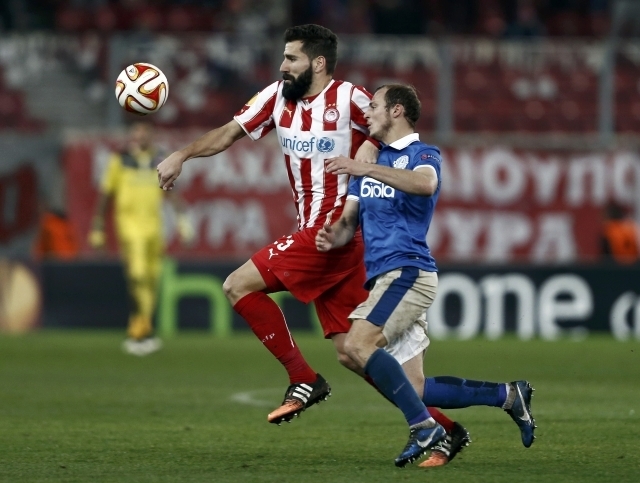 The new Greek government suspended competition in the top-flight Super League indefinitely after violence at a weekend match between the top two football clubs in the country.

Sunday’s game between bitter Athens city rivals Panathinaikos and away team Olympiakos was marred by a pitch invasion despite a heavy police presence.

The players and officials of Super League leader Olympiakos were also pelted with various projectiles and flares amid ugly scenes.

None of its fans attended after a previous league ruling which was put in place with the aim of avoiding confrontation at games.

Panathinaikos won the so-called “Derby of the Eternal Enemies” 2-1 to cut the gap at the top to just three points, but the focus of attention after the clash was on the continued troubles.

A Super League board meeting Tuesday to discuss the issue also saw an unsavory confrontation between representatives of the two clubs, with a reported brawl.

Following these incidents, the ruling Syriza Party has made its decision to impose a suspension, which will be the third team this season that Greek football has been halted.

“We are at the beginning of the end… everyone must understand that soccer with violence, irrationality and savagery cannot continue any longer,” said Deputy Sports Minister Stavros Kontonis, the Greek sports minister, told reporters.

“The prime minister and the government’s decision to eliminate this phenomenon that insults all of us, including our culture, is final.”

Back in September a ban was put in place after the death of a fan following clash between supporters of two third-flight teams Ethnikos Piraeus and Irodotos.

The second sanction in November was as a result of a serious assault on the assistant director of the refereeing committee.

Greek Super League president Giorgos Borovilos was summoned to a meeting Wednesday with Kontonis to discuss measures which could be put in place to tackle football violence.

Kontonis, who had earlier met new Prime Minister Alexis Tsipras, told Greek television that this weekend’s games would be called off and that a meeting would be convened next Wednesday to see if progress had been made.

“If the situation remains the same there will not be games again the following Sunday. We hope everything we discussed will be implemented,” he added.

In a statement on the official Super League website, Borovilos admitted solutions needed to be found to “chronic problems” afflicting the game.

He said it would be working with the government over the new measures, including electronic ticketing, greater controls on supporters’ clubs and a toughening of the disciplinary code.